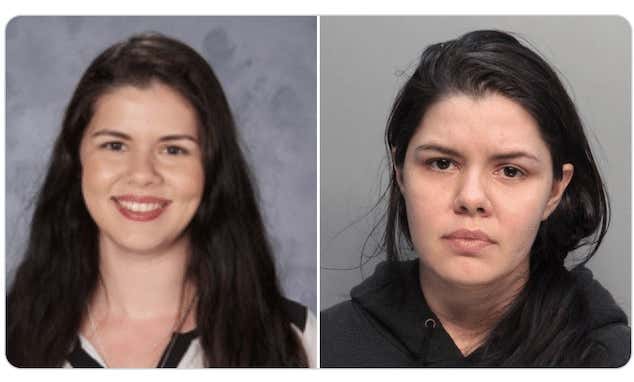 Florida – A Doral teacher was arrested Friday after police were notified by school officials that she was having sex with one of her 15-year-old students.

According to Doral Police, an anonymous email sent to a school employee at Doral Academy Preparatory School alerted officials of the relationship.

Desiree Christina Cartin Rodriguez of Doral was charged with two counts of lewd and lascivious battery.

Detectives spoke with the 15-year-old who told them that he had been having sexual relations with Mrs. Rodriguez. The student told police the relationship began in late August of 2019. According to the victim, he would stay in Rodriguez’s classroom during lunch hours and after school where they kissed on two separate occasions. He said the teacher would also pick him up at his home in her car and they would “engage in sexual conduct.” He stated that Rodriguez performed oral sex on him. The incident was captured on video by the teenager’s cellphone, which was provided to police.

After reviewing the video, detectives confirmed that the individuals were clearly identified as the 15-year-old student and Rodriguez.

Rodriguez admitted to the relationship when detectives interviewed her; she was taken into custody.

Thank you, 2019. Thanks from me and SSToolies everywhere for giving us this last minute gift on your way out the door. And this one is just so 2019. Nothing fancy. No elaborate subplots or wacky, over-the-top mad cap hijinks. Just a good, solid, compelling Sex Scandal Teacher story that delivers the goods.

In 2019 terms, Christina Cartin Rodriguez is more “Avengers: Endgame” than “Game of Thrones: Season 8.” The SST genre established huge expectations with a lot of moving parts, and she wraps up this phase of the story in a satisfying way like Marvel did. As opposed to halfassing your way to a lousy conclusion filled with lazy storytelling, character arcs that make no sense and setting up memorable scenes at the expense of a logical narrative. I hope we can all learn a lesson from Mrs. Rodriquez if Disney buys out Grading the Newest Sex Scandal Teacher. This is how you end a year.

The Grades:
Looks: In the spirit of the holiday season, let’s be generous, shall we? And by generous I mean go by that school portrait as opposed to her oddly asymetric mugshot. Her first photo makes her look like a Hispanic, Florida, slightly nerdier Diane Court from “Say Anything.” Ah, Ione Skye. The love interest in my all time favorite Chick Flick. So this is high praise.
Grade: B-

Moral Compass/Bad Judgment: Classroom make out seshes. Car sex. Allowing her sidepiece to walk around school with a positive-identifyingly explicit BJ video. And a full confession. We don’t know how that sits with Mr. Rodriguez, but here that’s an easy:
Grade: A

Overall: B. The work on the long anticipated 2019 SST Starting Lineup begins.