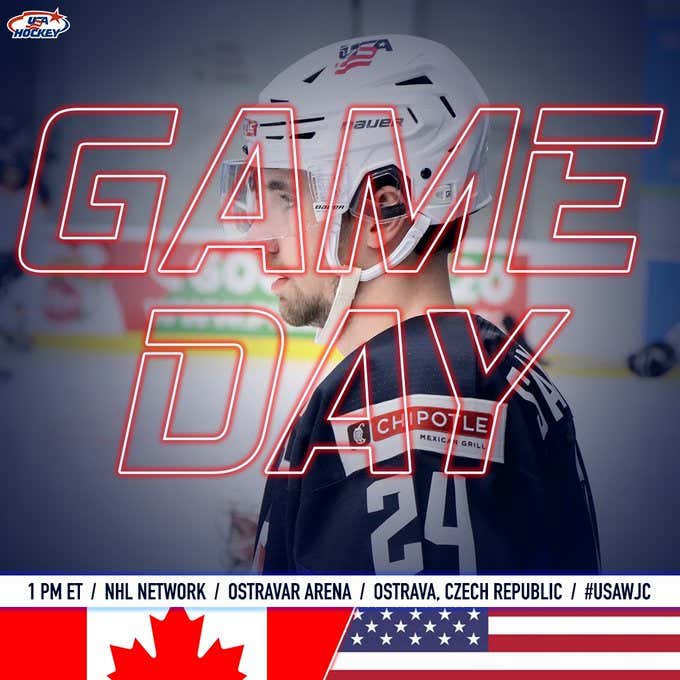 Who: USA vs Canada

What: 2020 World Juniors Preliminary Round

Why: Because USA Hockey is Do or Die.

And now we go. The 2020 World Juniors are officially underway. The day already got off to a wild start with the Czechs taking down Team Russia in the opening game. If there's anything we learned from that game, it's that the Czechs are going to be a total bitch to play against this tournament as the host nation, and that 17-year-old Jan Mysak is every bit of a stud as he's been hyped up to be. Also--the Swiss barely beat Kazakhstan 5-3 so I'm not sure if the Swiss suck or if Kazakhstan is actually pretty decent this year, but I'm going to bet it's the first option.

The last time USA and Canada played on Boxing Day was in 2015. That USA team had a few guys you might remember. Auston Matthews, Matthew Tkachuk, Zach Werenski and Colin White just to name a few. USA won that game 4-2, not that it necessarily has anything to do with this game today. What does have a little impact on this game today is the fact that USA beat the shit out of Canada 5-2 in last year's bronze medal game at the U18 World Juniors. Most of the players on both teams will be playing in the game today.

The biggest names to watch for today are going to be the #1 prospect in the 2020 Draft Alexis Lafreniere for Team Canada. The Canadians didn't even medal in last year's tournament so this team has a ton of pressure coming into this year. And with Lafreniere being the top prospect in the world, the majority of that pressure will be on his stick. Other guys like Barrett Hayton and Quinton Byfield will be there to help him out, but this is a game that Lafreniere needs to make a statement in.

For the Americans, they only have one 2020 Draft prospect on their roster and that's Parker Ford. Other than that, everybody has already been drafted. They have 5 players who lost in the gold medal game of last year's World Juniors, and a ton of guys on this roster also lost in the semifinals of last year's U18 World Juniors. So this is a team full of guys who need to add gold to their resume, and that starts with a win today. Guys like Cole Caufield and Oliver Wahlstrom will most likely be leading the way offensively. Also I think Arthur Kaliyev is the dark horse on this team to have the best tournament. And then defensively, this game will all come down to Spencer Knight in the net. As long as he's able to make sure that Canada doesn't get a chance to go on much of a run, the Americans should be able to pace this game and get out of there with a W.

So happy Boxing Day to everybody, but it's time to make this day miserable for Canadians everywhere. Make sure to follow along on Twitter (@BarstoolJordie) for live updates/highlights throughout the game. And then I'll be back in here between every period to update the Live Blog for everybody who is stuck in the cubes today. Now let's get out there and kick some fuckin' ass.

So the best news imaginable here is that Team USA is wearing their 1960 throwback sweaters for this game instead of those disgusting jerseys they wore for the Olympics. Right off that bat, that gives the Americans the advantage. Look good, feel good, play like some goddamn savages. And the boys came out of the gates buzzzzzzin' when Shane Pinto (OTT '19) got the first goal of the game thanks to this tip on a shot from Zac Jones (NYR '19) on the powerplay.

You'll notice that Chipotle is the main sponsor on Team USA's sweaters. No official word on if Pinto scoring here was a case of sponsored content, but we'll be going with Pinto beans all week long.

Little word to the wise here, boys and girls--if you take a penalty against Team USA, you're gonna have a bad time. Because on their 2nd powerplay of the day, Team USA throws one in the back of the net again. This time it was Arthur Kaliyev, who I mentioned above as being the dark horse for having the best tournament on this team.

The goal itself was a great shot but the play from Trevor Zegras and Alex Turcotte on the zone entry to get him the puck in the slot? Fuckin' mint. What a setup. What a play. Just beautiful hockey from Team Freedom.

It wasn't like Team USA was going to be able to shutout the Canadians today. They're too damn loaded to keep them off the board, especially in game 1 with all the juice heading into the game. So just a few minutes into the 2nd period, it was Connor McMichael getting the Canadians on the board for the first time of the game courtesy of this feed from Akil Thomas.

It was also only a matter of time before Barrett Hayton got himself on the board today. He's spent the entire season in the NHL so far this year with Arizona, so an NHL-caliber player isn't going to go long in this tournament without a goal. He decided to hop into the election campaign for the Mayor of Snipe City with this goal on the powerplay, with Alexis Lafreniere getting his first assist of the tournament.

And while Barrett Hayton has spent this season in the NHL so far this season, Nolan Foote's dad spent 19 seasons in the NHL. So with that being in the bloodline, you could count on Foote to find the back of the net at some point as well. I just wish it wasn't another powerplay goal in the 2nd period for the Canadians.

Ugly, ugly, ugly period so far for the Americans. Too many penalties and Spencer Knight's glove is getting picked to pieces right now. Big yikes.

And just before the end of the 2nd period, it looked like Shane Pinto had his 2nd tuck of the game to tie this bitch up at 3 each.

Getting greasy in the slot. Great jersey tug celly. But unfortunately it was half a second late and won't count. Hockey Gods owe the Americans one, though, and they'll come out for the 3rd period on the powerplay. 40 minutes down, 20 left to get this lead back.

Holy shit. In case anybody was ever questioning all the hype surrounding Alexis Lafreniere, you can shut that shit down right now. This was just silly work on the powerplay from the upcoming 1st overall pick in the 2020 Draft.

Draws all 4 USA penalty killers to him and then kicks it out to Barrett Hayton for the easy put away. Alexis Lafreniere is a confirmed game changer out there. You have to give him so much respect and so much attention. Combine that skill with a kid like Hayton? Good luck.

But Team USA didn't hear no bell! And Nick Robertson (TOR '19) finally got the Americans back on the board for the first time since the 1st period with this snipe.

It makes sense that Nick Robertson is a Maple Leafs prospect because that's an Auston Matthews release if I've ever seen one. The drag and curl, uses his defender as a screen, shoots between the legs and labels it for the back of the net. Nasty.

And 4 minutes later, it was Shane Pinto finally getting that 2nd goal of the game that was stolen from him by the buzzer at the end of the 2nd period.

USA had all the momentum. 2 goals to tie the game up with less than 5 minutes to go in regulation. Everything was going their way until…well…until the very next faceoff. Because just 7 seconds later

Ladies and gentlemen--Alexis Lafreniere. Good god. You knew this kid was going to have a statement game today. He's the top prospect in the 2020 Draft. Canada didn't even medal at last year's tournament. It's USA vs Canada. So he comes out today and puts up a goal and 3 assists, including the game winning goal. What a sick bastard.

Canada added an empty netter at the end to provide the final dagger and that's the way she goes. 6-4 win for the Canadians. What a game, but what a kick in the dick that feels like.

We NEED these two teams to play again in the medal rounds. We NEED it. This is what the World Juniors is all about. And by the way, I'd just like to mention that I called this shit.

Alexander Holtz gives Sweden the 3-2 final in overtime with just 5 seconds left on the clock. What a day for the 2020 Draft.