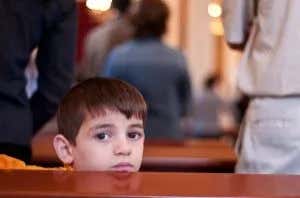 Most catholics today are commonly referred to as Chreasters. Practicing members of the church who only attend it on Christmas and Easter. Us fair weather fans show face twice a year, botch the new responses, and walk straight to the parking lot after communion. We justify this by having a confirmation name and giving mandatory donations to a school we graduated from 12 years ago. If you need pointers on how to get through another hour of mass then check out KFC’s survival guide before doing anything else.

While everyone in the building is standing around waiting to go back on Twitter, the jubilation turns into an hour long people watching event. Amongst the cast are former classmates, people you regularly sin beside, and everyone else you haven’t seen since Easter. Mixed in with them are certain individuals who give us something to get distracted by until brunch. Church MVPs that provide comic relief during a commemoration of a man who died for us. While attending mass be on the lookout for the stars of the show:

The People Who Take The Host Straight To The Tongue

Strong power player. It’s almost emasculating for the priest the way this has to go down. He’ll say The Body of Christ, to which you will respond Amen (don’t quote me on that) then he’ll take a beat to see if you’re showing palm or taking it to the dome. Anyone who makes the priest force feed them is solely trying to establish dominance. It’s always been more of a power move than an actual preferred method. Once the eucharistic minister sees you’re choosing to Yoshi the body of Christ, they’ll slap it on your tongue and try their best to not get their finger licked by a 40 year-old man in the process. Always a great exchange to watch while Taste and See is blaring in the background.

The people who make sure God can hear them singing from Earth are a personal favorite of mine as a spectator. Church is a sold out arena on Easter Sunday in the eyes of the church singer and other performers alike. It’s a Netflix special for the priest’s homily and a chance for the singers to showcase their pipes to the new parish members. They flex on the choir by going off-book as they’re bumping asses with their son the whole time to get him to join in. Meanwhile the rest of us are still mumble rapping each hymn after 20 years. If you’ve ever shared pew with a solid singer then you know how contagious their passion and grace can be. One minute you’re lip syncing thinking God will buy it, next thing you know you’re clapping to Hallelujah. Shout out to the church idols for getting everyone their participation points for the day year in and year out.

At some point during mass you’re bound to hear the thud. The someone finally fainted thud. No need to worry, just a little girl that became unconscious and non responsive out of nowhere. Surely she won’t come back next year and risk having that happen again. Wrong. Same time same place on Easter.

In the middle of a moment of silence you’ll hear a toddler scream something along the lines of “Daddy I’m bored!” and the audience will lose it. Church giggles to the point of church pisses. You hate to laugh but it’s just so relatable. These are the things everyone else is afraid to say. Sometimes they’ll scream something in the ballpark of “Mom can we go already?!” and you almost want to pump them up and shout “Yeah!” like they were commander of the strike. When the spokesperson toddler isn’t busy telling his dad he has to pee again he’s out here preaching harder than the priest. Soon he’ll grow up and he’ll pass the torch onto the next generation for a fresh new hour of material next year.

These people are veteran church goers who do not take kindly to Chreaster nation. They nail each remixed response and make it a point to recite them loud and proud for all the new faces to hear. Much like a gym rat’s hared of New Year’s resolutioners, the church regulars do not take kindly to the church bandwagoners. It took them 10 minutes to find parking, the kids behind them won’t stop talking during the homily, and they didn’t get their usual pew. They don’t like to question Christ but they find it hard sometimes. We respect these people for keeping the church in business and include them in the Church MVP list as a token of our appreciation.

Honorable mentions: Underage wine sippers, the little kid staring into your soul for one straight hour, and the guy who goes the extra mile for a peace handshake.