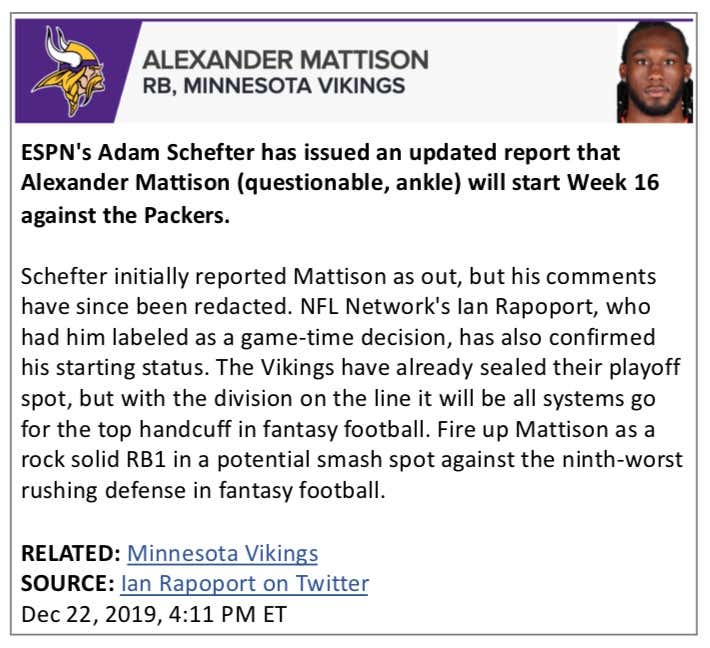 In a word, yes. In ten words, definitely very much without a shadow of a doubt yes, ESPECIALLY if its the Finals. If you are in a fantasy league that matters even a little bit, you know how much your team effects your mood. Being able to be the best at picking which absolutely incredible random events will take place on a football field better than your friends may be the biggest reason someone had a good or bad year. There should be no rules against trying to get an advantage to feel that feeling and have the right to talk shit for months if not years that don't involve breaking actual laws or anything that can be considered collusion. I'm not just talking about texts or tweets. I'm talking about using any roster advantages you can get (I'm pretty sure most leagues prevent this move from being done, but the proof of what people think is acceptable is in the 92% pudding).

A little Photoshop is nothing. If your opponent doesn't quadruple check the report about a player that is out while ignoring the big fat red O next to their name and that the person giving them this hot tip wants them to lose more than literally anyone else in the universe, they deserve to start the injured player and get a goose egg. I'll admit this gets a little murky if the person sending the fake report is a random owner in the league with nothing to gain. But I always feel like it's me against the world in my fantasy leagues and like I do in many aspects of life, I subscribe to an old Stone Cold Steve Austin motto: Don't trust anybody.  And to remix a motto by another GOAT, all is fair in love, war, MTV Challenges, and fantasy football.

So if you are playing against Mike Boone tonight and need a Hail Mary of a zero from your opponent to win a bunch of money, a trophy, or more importantly the right to be the most obnoxious asshole in your group of friends until at least September, not only to I approve this message but I demand you download the picture above and hope your opponent is an idiot. A fucking idiot. Not only because it is acceptable but because that person didn't give me a click today.

As always, Barstool Sports is a democracy that is for the common man, by the common man. So add your 2 cents below by casting the vote that is your God given right as a human.