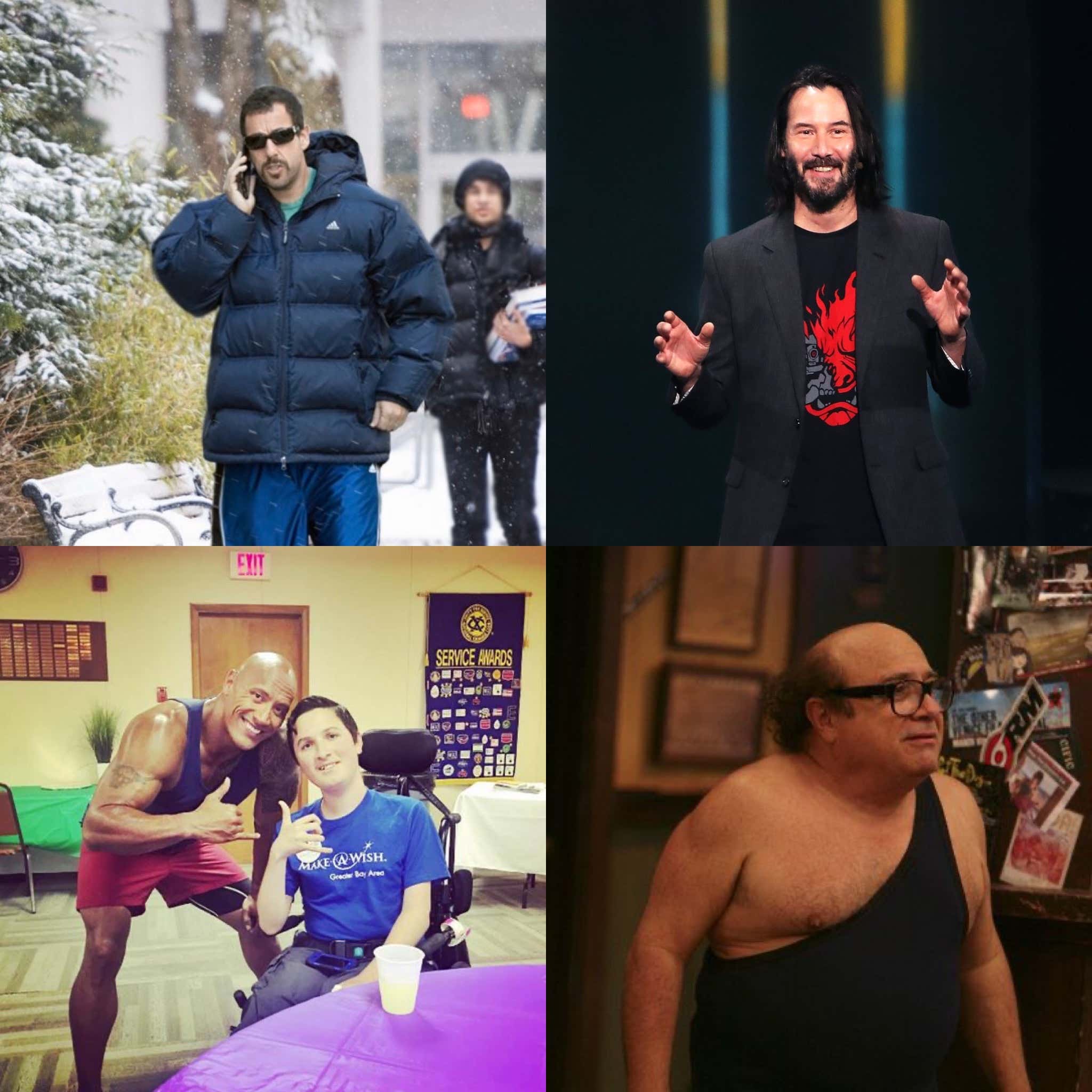 Last night Adam Sandler’s And 1 Mix Tape reel went viral. White Chocolate out there on the hardwood dropping Uncut Dimes. No look, touch passes wrapped up perfectly like a Christmas present from your mom with a bow on top. Delivered right into your hands with enough zip on in to cut through the defense but soft and smooth like a balloon falling right into your hands. As fresh and soft as a bottle of Johnson’s baby powder, but wetter than a whole damn bucket. Also had a little Ben Simmons vibe to him. Pretty sure he’s a righty but cant really tell? 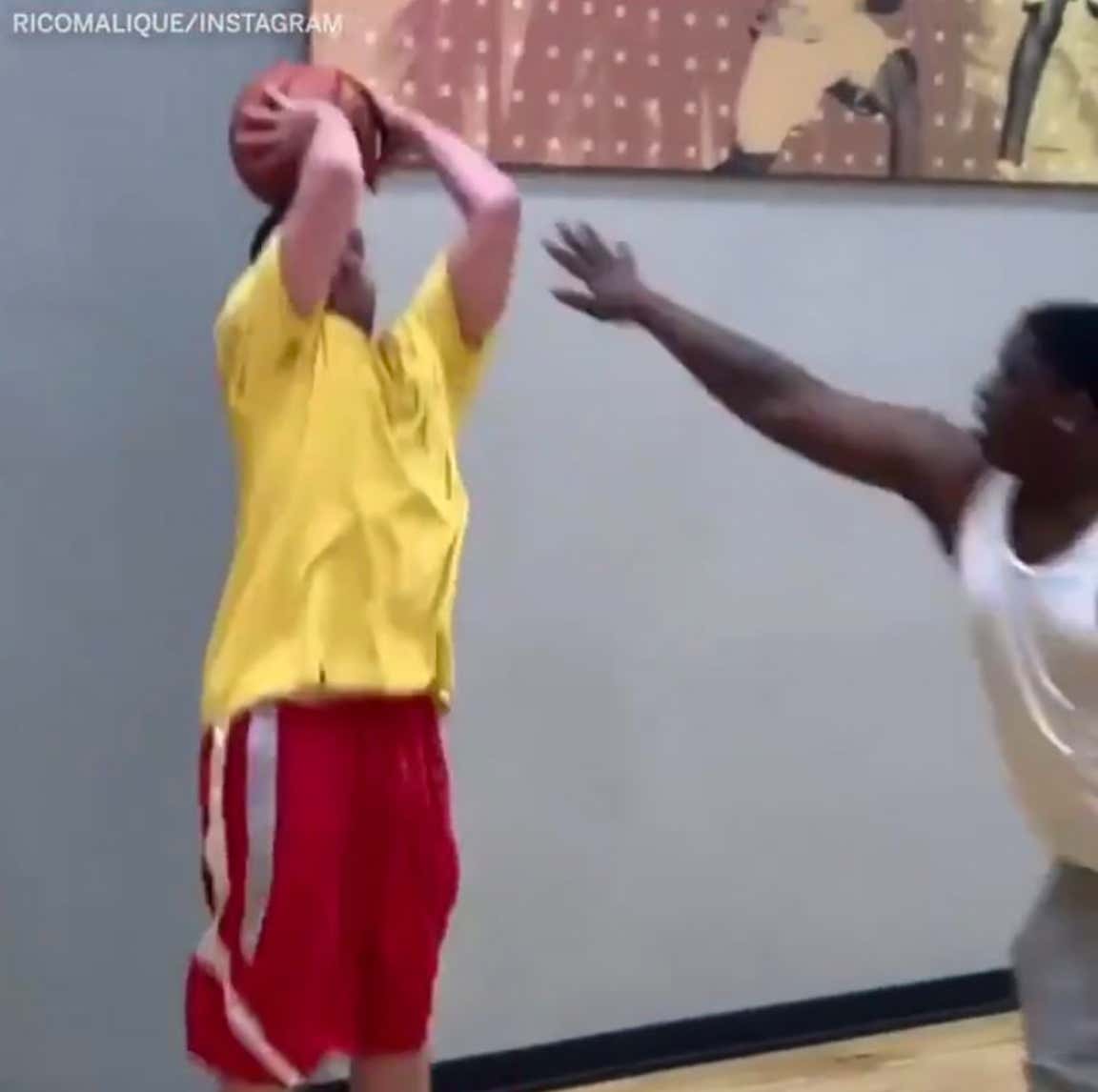 I mean how are you supposed to guard that? Cant even tell where the ball is leaving his hands. His game is like the pythagorean theorem: There is no answer!

Anyway, this is just the latest in Adam Sandler’s Victory Lap of Life. I dont wanna call it a resurgence or his renaissance, because he never really left. But with Uncut Gems coming out, Sandler is back in the spotlight. The New York Times wrote that expose on him, hes making the media rounds on PMT and all the podcasts. And when that happens people remember just how fucking awesome he is and they remember not to take him for granted. They remember the basketball shorts, they learn of just how successful his movies are. They hear stories from his past and his career and realize that hes actually a tremendous actor, an unimaginably rich ($420 million) business man, and above all else – an awesome dude who has stayed as humble as humanly possible.

And so with this latest burst of Q Rating Dominance, I am officially crowning him the Number 1 Most Likable Guy On Earth, and bumping Keanu Reeves down to number 2. Keanu has been sitting on the throne for the last 6 months. He, too, was the subject of a GQ article that reminded everyone how generous and good hearted he is despite persevering through some of the harshest, most depressing hardships life can throw your way. When he appeared at that Marvel panel, the world lost their mind. Keanu Fever had dominated the scene until Sandler took the baton.

So todays elimnator includes those two, the guy who had it prior to Keanu, the Rock. And the OG likable guy whos been doing it for FIFTY YEARS, Danny Devito. This is one of the hardest questions I’ve ever posed on Barstool. Harder than one inch inside your mom and your dad one inch inside you. Harder than any question from ATI.

The Tale of the Tape:

1 Seed – Adam Sandler. Best friends with everyone from Chris Farley all the way to Jennifer Anniston, with everyone in between. Worth almost half a billion because he brought us the joy of Billy Madison and Happy Gilmore, and continues to make algorithm friendly block busters that may not win Oscars, but appeal to the hearts and minds of the wholesome people of America. Pops outside of his Netflix Rom Com/Goofy Buddy Movie Buddy every few years to flex on the industry with a drama that shows his acting chops. A quiet, humble, family man who stays out of the spotlight. And the perfect amount of Dont Give A Fuck Attitude, symbolized by his patented look of oversized basketball shorts with a t shirt and hoodie, whether hes playing pick up ball at the Y, or having dinner in the White House

2 Seed – Keanu Reeves. Keanu started as the Hollywood surfer brah from the phone booth in Bill and Ted’s Excellent Adventure and Johnny Utah surfing barrels and swells. We rode the bus with him in Speed. He introduced us to the Matrix and most recently established himself as the ultimate Dog Person when he murdered 299 people in 3 films as John Wick. Everyone knows that Keanu Reeves. But what you might not know is that Keanu’s dad abandoned him when he was 3 years old, his sister was diagnosed with cancer, River Phoenix was a close friend of his who infamously overdosed on drugs, and later in life he and his girlfriends lost their baby during childbirth. A year after that loss, his girlfriend then died in a car accident. From basically the day he was born to present day, hes been overcoming the absolute worst tragedy life has to offer. And how did he react? Did he turn to drugs or violence? Did he spiral into a dark depression and become a reticent recluse mad at the world? Nope. He became the star of not 1 but 2 of the most popular movie trilogies of all time, and he gave away his ENTIRE Matrix salary to others. A huge chunk of the $75 million he earned went to leukemia research in honor of his sister’s fight, and the rest he donated to the cast and crew of the movie. Reportedly every member of the special effects and costume team received 1 million dollars each. Keanu knew how important that was to the success of the film, so he gave back to the people behind the camera that made that movie into a legendary block buster classic. He gave every member of the stunt crew a Harley Davidson. That sort of humility from the guy who played the character referred to as “THE ONE” is unreal. If I went through what he went through I would probably be a mass murderer. Instead Keanu turns into a living, breathing Go Fund Me, helping out everyone around him to the maximum.

3 Seed – The Rock. The People’s Champ. You cant find a bad story about the man. Everyone I’ve EVER encountered who knows the Rock even slightly will tell you his entire persona is genuine and real. None of it is an act. Hes as friendly and down to earth behind closed doors as he is when doing an interview on TV. Much like Keanu, The Rock has every right to be a maladjusted asshole mad at the world if he wanted to. When he was 15, his mother tried to commit suicide and Dwayne had to save her. She got out of the car on the Interstate and tried to walk into traffic. Her son had to grab her and pull her back to the side of the road, avoiding the swerving cars. He was 15, folks. Anybody else who has to witness and thwart their own mother’s suicide unfortunately probably spends their life fighting that memory, unable to achieve the life they wanted. The Rock? Well he went on to play college football before becoming the People’s Champ in the WWF Attitude Era which I deem to be the funniest most provocative thrilling force in entertainment history. He transitioned out of the WWF into major motion pictures including several of the most lucrative franchises ever in The Mummy, Fast and Furious, and Jumanji. Hes helped me stop my kids from crying and put a smile on their face singing “You’re Welcome” as Maui from Moana. He gave us the Entourage of Sports with Ballers and revitalized “Right Above It” with the intro song. KANE IS IN THE BUILDING! All while being the most genuine, generous, relatable guy. He achieved ALL of this while fighting depression. The guy will probably get votes in the 2020 election and you know what? Probably deserves a few.

4 seed – Danny Devito. Add up all the years Sandler, Keanu and the Rock have been famous, and you get Danny Devito’s career. Dude has been famous for FIFTY YEARS. Half a century the man has been in the game. You know how you achieve that? By doing 2 things:

2) By being the most polite, engaging, and fun person in the room every where you go.

Danny’s size and his personality basically make him a human Winnie The Pooh. It enabled him to unlock a level of longevity that I dont think many people ever have. He’s like your grandpa and your puppy dog and your favorite stuffed animal all rolled into one. He has the comedic chops to go along with the dramatic chops. From the Penguin to Matilda’s dad to Frank Reynolds, the guy has done it all after failing like a zillion auditions. The old urban legend is that Danny Devito failed hundreds and hundreds of auditions before he ever got his first role, but as soon as he got to Hollywood, he never left. Because everywhere he goes, people like him. And the fact that he joined the cast of Always Sunny the way he did cements him as one of the coolest dudes ever. After a 40 year run in Hollywood as one of the most notable and recognizable faces in the industry, he decided to give these 3 clowns the time of day for their indie comedy project and committed to the role of Frank Reynolds, the most vile human to ever exist. Agreeing to do that role after four decades of work establishing yourself as Hollywood’s favorite older gentleman is such a fucking awesome move. They had to film his entire season of scenes in a single day when he came on board because of his schedule, but he loved the experience so much he ended up sticking around for THIRTEEN MORE SEASONS. He was a major, major reason for the success of 4 of the other most likable people in Hollywood. That sort of move is rarely seen in such a shitty cutthroat industry. Hes the most charming little fella – like an Ewok but a wildly successful one. I asked him what the key to being as likable as he is. He told me “Do you work. Put your nose to the grindstone. And I have fun with everything I do.” He was completely uncomfortable when I even suggested he was the most likable ever and he said just do your job and have fun. I’d say I wish he was my grandpa but I feel like he already is.