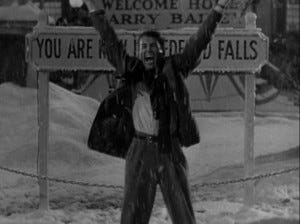 So it's Christmas time and there's been tons of lists regarding Christmas movies etc. My pals Eddie and Carl talked about them on Dog Walk, tragically Eddie slipped in that he's never seen the movie. Which is amazing to me considering Eddie is like the nicest guy in the world.

Every year on Christmas Eve at 8pm like clockwork - It's a Wonderful Life is on the TV at the Christmas Eve celebration. Now I'll admit some years (like 2015 when I was watching San Diego State demolish Cincinnati in a game I picked heavily  that was attempted to be stolen from me from a certain skell Fox soon to fired host who's name rhymes with Jay Pravis)  it takes a back seat , however without fail at about 10:45 just around the time Clarence lets George come back to life, I make sure I have my eyes glued to the TV to watch the ending. It's my favorite Christmas tradition.

That magical sequence of him hugging his kids, kissing his wife, watching his brother come in, all his friends help him out, and Clarence teach him one final lesson, all with the beautiful rendition of "Hark The Heralds Angels Sing" playing in the background, is well - magical. The quotes are so poignant…. "To my big brother George, the richest man in town."  "No man is a failure who has friends." Just absolutely perfect messages around Christmas time. Forget the money , forget the gifts , forget your problems… being surrounded by your family is worth so much more. Harry's quote really does hit home.

I fully admit this is on my acceptable to cry list , and in fact if you don't you're a robot.

It got me thinking, is George Bailey the most selfless and inspirational person in Cinema History ?

I'm sure Jeff Lowe and Kenjac will have opinions on the subject which I would love to hear, but I think I have a strong case for GB. Here it goes :

Just a absolute amazing quality to have at a young age to be able to put others in front of yourself, but that's par for the course for George. As the old saying goes, "I've been in this hole before and I know the way out." George literally dives in that hole to save his younger brother.

With his family in need following the death of his father, George is forced to take over the family business. He gives up his tuition to Harry. Harry promises to take it over when he graduates, however …

Just another day for George Bailey who has to roll with the punches and gives up his own happiness for someone else. All his life he wanted to travel and when it's finally his chance he passes it up again.

While Potter is jacking up rent for the working class like the skell slumlord he is , George is providing affordable housing to the community. Never forgetting where he came from, and building up his community by giving back.

- He stands up for what he believes in

What does George do when that skell Potter offers him a much better job ? He tells him take a hike because he knows it means the family business will be shut down. "Stand for nothing, you'll fall for anything" - Rico Bo$co

-He takes the heat for Uncle Billy

Uncle Billy has a simple task. Drop the money off . Damn guy can't do it. Puts it in the newspaper and hands it to of all people … Potter. After raking their brains to figure out where the hell Billy could have put the money, George realizes he's screwed and takes the heat for the missing cash, knowing it will mean he's doomed for jail.  Always putting others in front of himself , truly selfless.

-He loves his wife and kids

It may take a near death experience to remind him, but through all the flaws, and all the struggles. He loves his "drafty old house", and is happy to take care of them when their sick .

So when it all comes down to it… and he finally needs the help of his friends , they come running as Uncle Billy says. Those final ten minutes really nail down what life and Christmas is all about.

Be a good person , make an impact on people's lives, help others, sacrifice for others, hug your kids, love your family through everything, and always always always remember, "No man is a failure who has friends", and those friends and family will forever make you rich.

Thanks as awlays to George Bailey for reminding us about the Christmas spirit while acting in such a generous and inspirational manner.