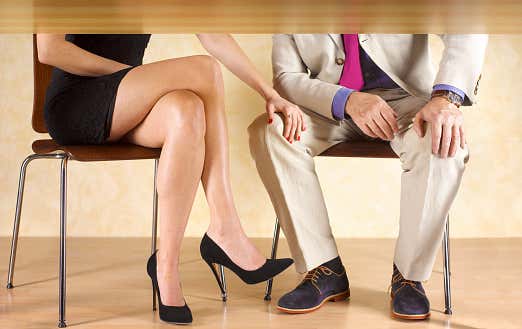 (Source)–Have a thing for your married boss? A steamy supply-room hookup might not be so far-flung, thanks to a racy new dating service called Affair at Work.

Launched last month, the Web site is designed to help married and taken employees “safely” cheat on their partners at the office.

Here’s how it works: A wannabe cheater heads to the site’s homepage, where he or she can log in through an Instagram account, enter a co-worker crush’s handle and e-mail address, as well as his or her own. Then, the potential flame receives an e-mail declaring, “A co-worker wants to have an affair with you.” If they choose to go to the site — and happen to enter the other person’s Instagram handle and e-mail address — the two-timers get an e-mail breaking the good (?) news.

“You both requested an affair with each other. Enjoy!” the service cheerily declares, along with their Instagram handles.

I feel a little weird writing this while sitting in Barstool HQ, but I am going to step out on a limb and say that banging someone at work is a universal fantasy. Anyone who has ever worked in an office has had an office crush. How many times do those office crushes ever turn into an actual affair/hookup? I don’t know? Literally I don’t. I am the type to be labeled as a “work-husband” meaning that a female coworker will complain and bitch and moan and hangout and I pretend to care because I want to hook up, but she NEVER thought about me in that way. At least that’s what I thought. Never made the move in fear of rejection/an HR complaint. Now…this app is making it possible. You just plug in your request into the app and then you get an email “Congratulations, Alyssa from marketing has agreed to fuck you. Please meet her in the break room at 1230pm”. And just like that you’re on your way to making a decision that will probably ruin your career and marriage! At the end of the day people are ruled by one thing. The most powerful three letters in the world…K.G.B.