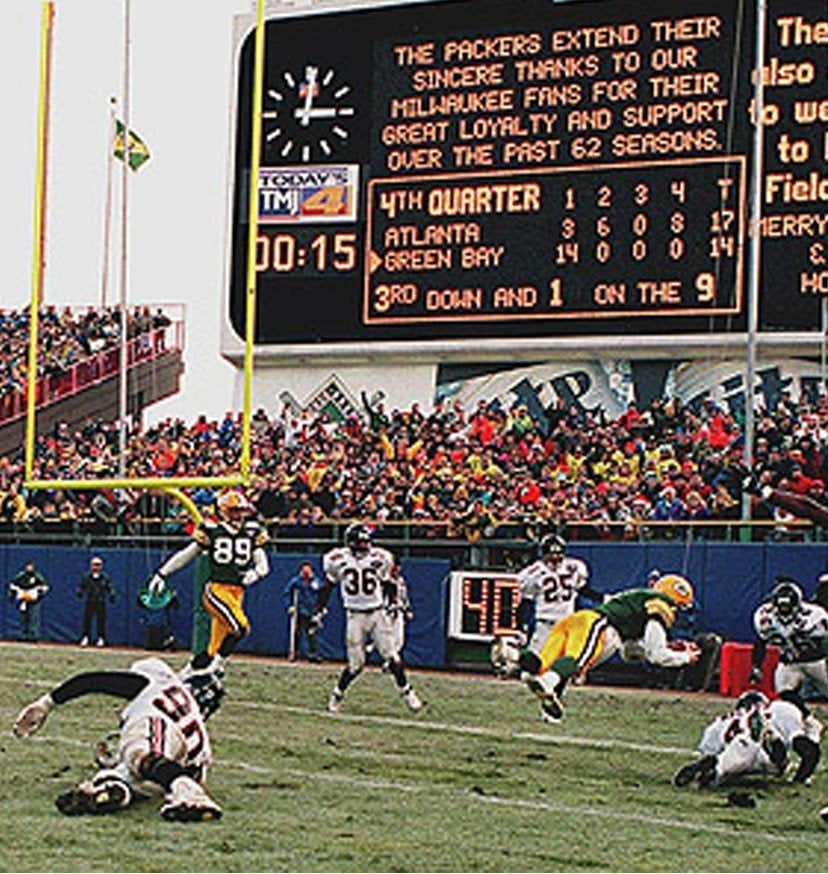 The Green Bay Packers play their final home game in Milwaukee, edging the Atlanta Falcons 21-17 at County Stadium. The Packers played between two and four home games every season In Milwaukee from 1933-1994. The move was to grow their fan base in the closest big city and to prevent the NFL from ever adding a team to Milwaukee. The Packers held a record of 76-47-3 in Milwaukee.

The Green Bay Packers are the team that defines small-town American Football as they were founded in 1919, one year before the NFL played their first game. The Packers, unlike the rest of the NFL’s small-town teams, survived thanks to their success, winning championships in 1929, 1930, 1931, and 1936 as the league was transforming into bigger markets. Mindful of this, the Packers, while staying true to their roots, began playing regular-season games in Milwaukee. Milwaukee once had an NFL team of its own called the Badgers who played from 1922-1926, and the Packers knew if the city got a second chance at the NFL, they would be able to stick.

The Packers’ first game in Milwaukee was on October 1, 1933, a 10-7 loss to the New York Giants at Borchert Field. Over the next two decades, the Packers played between two and four games a season at the State Fair Grounds in Milwaukee. The stadium, also known as the Dairy Bowl, played host to the 1939 NFL Championship Game, with the Packers blanking the Giants 27-0.

In 1953, as County Stadium became home to baseball’s Milwaukee Braves, the Packers seriously began to consider a move full time to Cream City. By this time, television and radio were becoming a major factor, and the Packers despite playing in Green Bay used Milwaukee’s media market to its fullest advantage. With City Stadium in Green Bay in poor condition, the Packers used Milwaukee and County Stadium to get Green Bay to build a new stadium in 1957. While what is now known as Lambeau Field opened in 1957, the Packers continued their arrangement with Milwaukee, playing a Divisional Playoff Game against the Los Angeles Rams in 1967, which they won 28-7 before advancing to NFL Championship and what would be called the Ice Bowl.

Over the next two decades, as the Packers struggled to regain their Super Bowl glory, Milwaukee remained a part of their schedule. As the 1990s arrived, it was clear that Milwaukee was starting to have a negative effect, as County Stadium, primarily a baseball stadium, had become substandard to the modern NFL. The Packers were at the start of a resurgence in 1994, with Lambeau Field now being expanded and renovated to incorporate more seats and more suites. County Stadium, which had the unique feature of both teams using the same sideline, was now hurting the Packers, leading to them ending the 61-year arraignment.

The Packers played three games at County Stadium in 1994, losing to the Miami Dolphins 24-14 in Week 2, in the first showdown between Brett Favre and Dan Marino. They would beat the Detroit Lions in Week 10, with the final home game in Week 16 coming in Milwaukee against the Atlanta Falcons. The Falcons had been personal for Favre as they traded him to Green Bay after his rookie season in 1991. This was Favre’s second start against his former team. In 1992, the Packers suffered a 24-10 loss to Atlanta at the Georgia Dome. This time the Packers would win 21-17, as Brett Favre’s nine-yard quarterback sneak into the end zone won the game in the fourth quarter with 15 seconds left. The Packers would finish the season at 9-7 under Mike Holmgren, making the playoffs for the second straight season.

Today the Packers still honor their connection to Milwaukee by offering fans in the city a partial season ticket plan called the “Gold Package” with buses transporting groups of fans to Lambeau Field weekly.