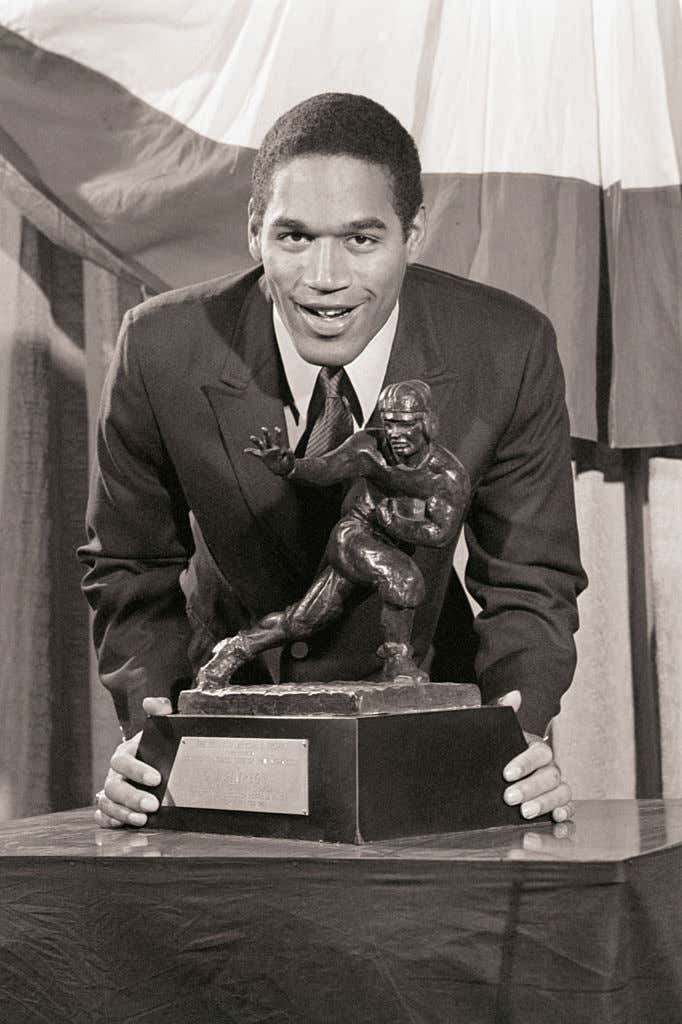 I was in a deep Wikipedia rabbit hole today when I somehow ended up on "the Heisman Trophy."  You know how Wikipedia rabbit holes work. After learning all about its history and design and regional bias controversies and the notable winners, I obviously came to the OJ Simpson page, which obviously lead to the OJ Simpson murder case page. I was on pace to end up on "plant arithmetic" or "United States v. Approximately 64,695 Pounds of Shark Fins" in 3 hours as per usual, but I happened to open up a new tab to Google "OJ Simpson" for some extra non-Wiki information. The top news alert for the day caught my eye: 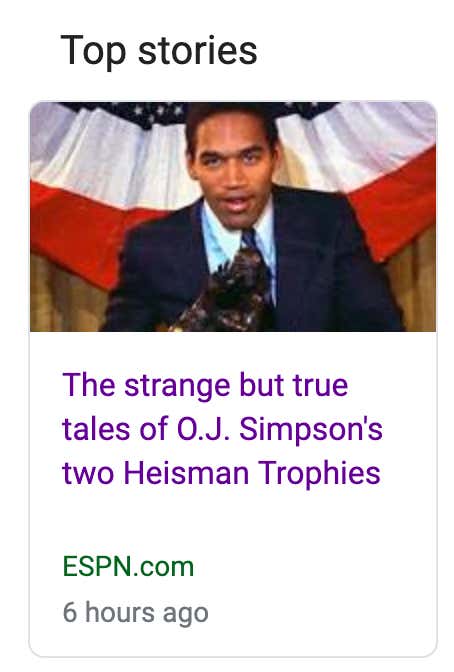 As a company man I try to avoid ESPN.com, but those motherfuckers hit me with a "Strange But True" in the headline, which is basically like dangling drugs in front of an addict.

And that's how I ended up learning about Lewis Eugene Starks Jr. and the stolen, buried, homeless OJ Simpson Heisman Trophy.

On June 12, 1994...the night Nicole Brown Simpson and Ronald Goldman were murdered [and] the Bronco chase happened... Simpson's Heisman was hidden away at the LAPD's request, then put back on display. Then it was stolen.

Starks was the top suspect because he A) was a burglar and B) had the stolen trophy. Little something we like to call "circumstantial evidence."

…In 1994, Starks was 35 years old, described by the LAPD as a career criminal after being convicted of burglary in 1987 with a rap sheet that already included a dozen court appearances on various drug and theft charges.

Today, he is nearly 60 years old and has remained adamant that he was not one of the thieves who burgled Heritage Hall. However, Starks confessed that not long after Heisman No. 2 disappeared from USC, it was in his possession. [ESPN]

I don't know Lewis so I don't know if this comes with a gigantic WINK WINK, and I don't like to judge books by their covers, so just because he's a career criminal who has spent a lot of his adult life in jail for stealing things doesn't mean he's lying about stealing this very big thing. This very big thing that police investigators say was a two-man job. Let's just say I have my suspicions.

A USC custodian who came in for work at Heritage Hall on the morning of July 28, 1994, first noticed the empty case. Heisman No. 2, the jersey and a plaque describing Simpson's gridiron greatness were all gone. Investigating officers didn't find any evidence of a high-tech heist. Instead, they found that four screws had been removed so the clear box could be simply lifted off of the black pedestal and its contents taken. They immediately suspected it was a two-person job.

HIS story is that he bought it from his buddy — a buddy who wore the stolen jersey to give guided tours of his backyard to show people the spot he buried the Heisman — for 600 bucks and his car.

He says a friend stole it and was keeping it in South Central L.A., only minutes from the USC campus. That friend kept the trophy buried in his backyard so no one could find it, but according to Starks, his pal was much more cavalier with the jersey, routinely wearing it around the house as he took people, including Starks, out back to see the buried treasure.

Starks says he bought Heisman No. 2 from the friend for $600 and a used car.

The lead investigator, who recently retired having never solved the case, said in April "It's hard to say because it is still up in the air. … But from here, Lewis looks pretty damn good."

But when it came to actually prosecuting that…the glove never fit.

Anyway, Starks had it, and when the Simpson trial kicked into high gear, he did what any person who likes money would do:

He tried to sell it.

And when he couldn't find anyone to buy the trophy of a guy who obviously* murdered a woman, he tried to return it to USC for reward money.

They weren't offering any.

Then, while the Simpson murder trial was shifting into high gear downtown, he tried to sell the convicted football star's most famous award. There were no buyers. So, he took a different tack, calling USC to see if there was a reward being offered for the trophy's return. The person who answered the phone at Heritage Hall said there wasn't. So, Starks was stuck with it.

*are we legally allowed to say "obviously" yet? Lawyers didn't get back to me. "Allegedly obviously."

With his plan foiled, Starks moved it to different hiding places, being extra sneaky so just in case his pesky parole officers ever searched his shit, he could say it was some other Heisman Trophy — maybe even HIS Heisman, hoping the officers weren't like me and hadn't just read about every Heisman winner since 1935 and knew Lewis Eugene Starks Jr. wasn't on the list.

For the next two decades, Starks was in and out of jail and Heisman No. 2 was in and out of apartments, garages and storage facilities. He removed the nameplate and kept it separated from the trophy so that if a parole search was called and the Heisman was found, it couldn't be traced back to the USC theft. Heisman No. 2 was with Starks when he was free and with his friends and family when he was behind bars.

Eventually, times got really tough for Starks and he was out on the street, probably wishing he hadn't sold that car for a fucking trophy nobody wanted to buy.

When harder times forced Starks into the streets, he lugged the 45-pound trophy around with him, sleeping under the streetlamps of Los Angeles with his arms wrapped around an O.J. Simpson 1968 Heisman Trophy.

And that's how OJ Simpson's Heisman trophy ended up as a homeless guy's binky on the streets of Los Angeles.

As of now, it's back in Heritage Hall at USC, touched and passed around and buried and drooled on so much that the top of OJ's bronze head "has been polished down to a bright orange shine."

The story of the OTHER copy of the Heisman is awesome as well — a sheet-metal wholesaler bought it at auction for over $250K because, quote, "you always have to keep impressing your girl!", then stashed it in a safe deposit box and won't show it to anyone because he's sick of talking about it — but I've already written too much and I wanted to go back to Wikipedia to read about plant arithmetic.

[via ESPN.com — "The strange but true tales of O.J. Simpson's two Heisman Trophies"]