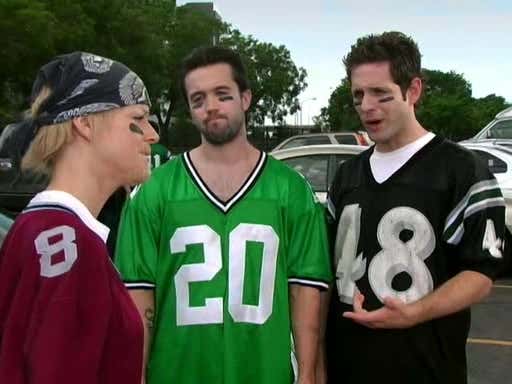 In case you didn't know, the Eagles went into last night's game with only 3 healthy, active wide receivers. They've played the entire season so far with zero good receivers, but only 3 were active last night. That quickly dropped down to 2 after Alshon Jeffery left the game early on, and then the Eagles were left with just one wide receiver by the time the game went to overtime.

So needless to say, the Eagles need a ton of help at the receiver position. And since Howie Roseman is a complete and total coward who won't go out and sign either Antonio Brown or Dez Bryant, why not just let the good people of Philadelphia see if they have what it takes to be better than the sorry bastards they've been trotting out there for the past 13 games? Let's just get crazy and go Invincible 2 on everybody's ass. What's the worst that could happen? It's either you take somebody off the street or you throw Josh McCown out there as an emergency wide receiver. Seems to me like those are the exact same options, except you can make a movie about one of them. And sure, maybe Josh McCown wouldn't be the worst option out there if we were back in 2006...

...but 2019 Josh McCown is a different story. I'll take some Marky Mark looking bartender who had a great high school football career and "could have went pro if they didn't tear their ACL in the state championship game" instead.

So either Howie Roseman signs Antonio Brown or he has an open tryout for a new receiver. Those are the only two options, in my opinion. Anything else and he's the biggest coward on the planet who deserves to get run out of town.