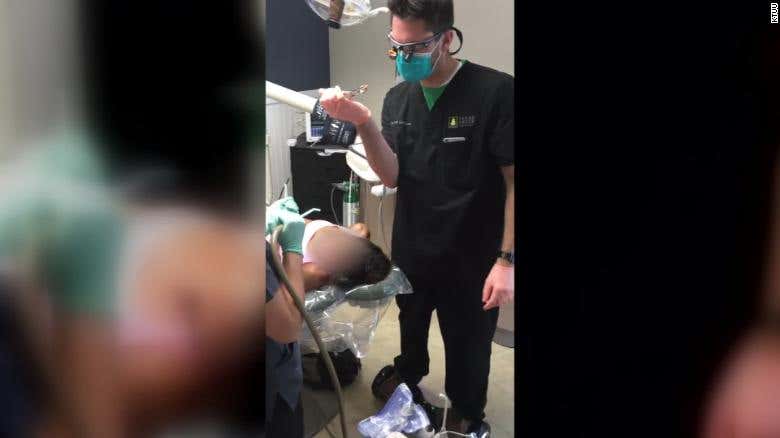 CNN - As Veronica Wilhelm lay sedated in a dental chair, her dentist was being filmed riding a hoverboard while he extracted her tooth.

Wilhelm says she didn't know about the hoverboard, or that her procedure was captured on camera. She found out only when investigators contacted her to confirm she was the patient in the video.

According to a lawsuit filed by the state of Alaska, her dentist, Seth Lookhart, texted the clip to friends and family, joking in at least one conversation that performing oral surgery while on a hoverboard was a "new standard of care."

In the video, Lookhart can be seen standing on a hoverboard in the operating room while he pulls out a patient's tooth. Soon after, he zooms out of the room, takes his gloves off and throws both hands up in the air while zipping down the hallway.

Alright so real quick I would just like to start off by saying I absolutely DESPISE the notion that we're almost in the year 2020 and people are still referring to these contraptions as "hoverboards". How have we collectively not come up with a better name for these things yet? They having fucking wheels for crying out loud!! Wheels that need to make contact with a surface in order to move! It sure as shit isn't a hoverboard. Not even in the slightest. Yet everybody just calls them one because some asshole a few years ago thought that hover just meant electronic. It is so aggravating. It would be like if somebody handed you a SlimJim and said, here's a medium-rare ribeye. But I digress.

Anyway, I think this is exactly what the dental industry needs to turn around their public perception. I mean nobody likes to go to the dentist and that's because all you've ever thought about the dentist is that he's some sinister prick who waltzes you into his office to torture your mouth for 30 minutes to an hour. You walk in there and there's a cold pleather chair just waiting for you to uncomfortably slide onto. Then he already has all of his weapons already laid out on the table just staring you in the face. They've got hooks, they've got blades, and they just look like pain and agony. A dentist is pretty much a psychopath who went to a few extra years of college.

But not anymore! Because thanks to this cocky fella over here, now dentists can be cool and hip. They can be your pal. They can kick it with the homies. Just cruising around on a hoverboard that doesn't actually hover just like all the youths do. How do you do, fellow kids? So you get a few more of these guys out there and all of a sudden, going to the dentist's office is like a party. You won't be continually pushing off that 6-month checkup for 4 years and counting. Heck, you might even schedule and appointment for every 3 months just because it's such a blast. I'm not so sure why this man is getting sued because as far as I'm concerned, he just saved the dental hygiene of this nation.