The annual year-end review wrapped up last night at Barstool HQ and once again it reminded me of how grateful I am to the readers, listeners & viewers, and most of all, how incredibly lucky I am to be here. (*Bonus, this all-hands meeting ended with a night-vision tree-stand camera style video of who's been stealing from the merch room. But I digress...)

Last year's meeting gave me the same type of feeling and a wake-up call that I could & should always be doing more. Stop slacking on the blogs, ignore any nay-sayers & don't be afraid to try new, weird things... It always helps to hear now & then. Especially considering what I was doing the final winter before I started at Barstool.

I had been wor... wait, do you hear that? Is that the time travel sound from Wayne's World I hear? Ahhhh we're going back in tiiiiiiiiiimmmme.... 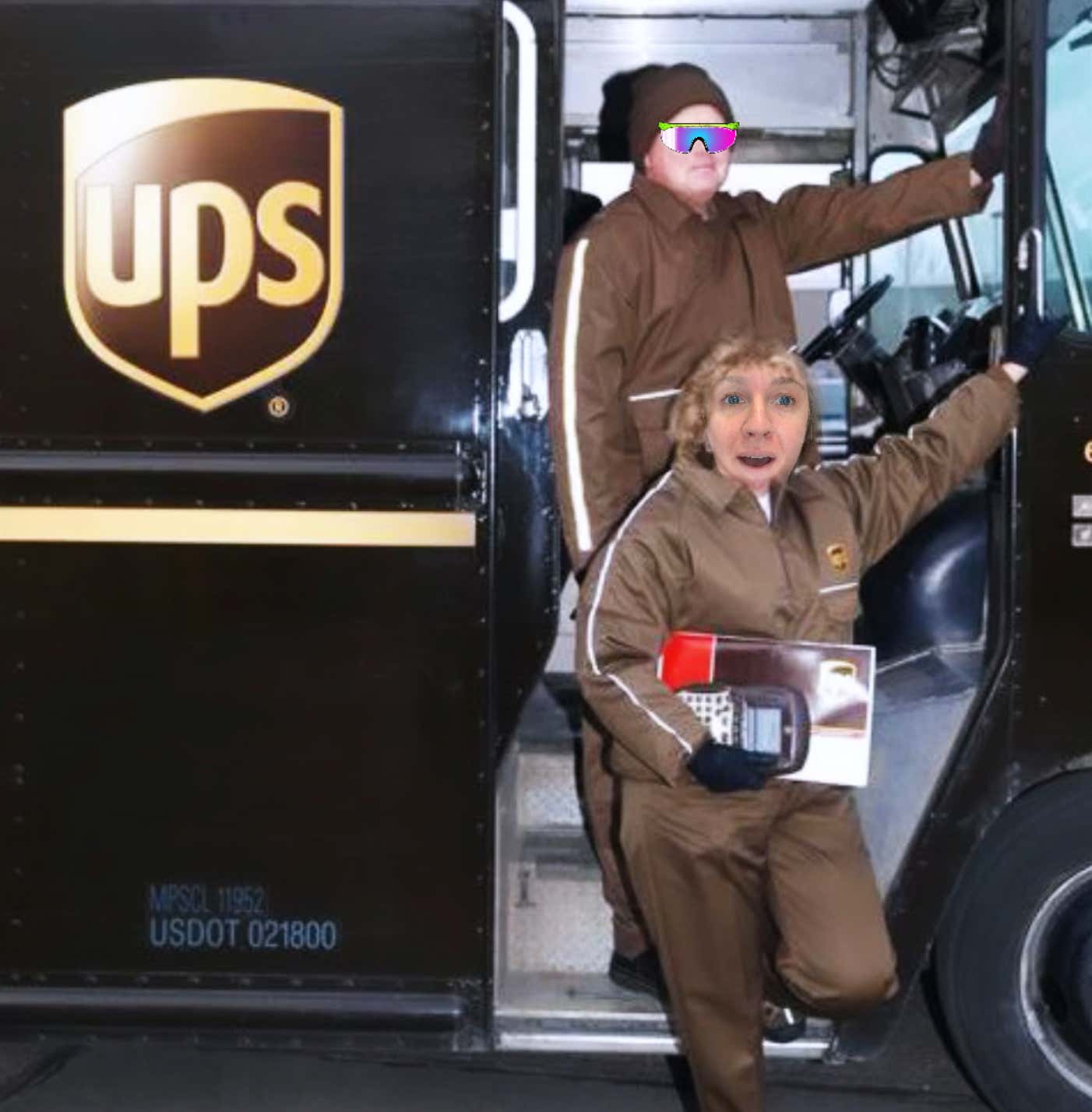 That day my driver (*let's call him 'Jay') and I had just finished dropping off some packages in a run-of-the-mill Philly suburb (Delco - Aston, PA) when he pulled over to take a call. Upon hearing his tone, I shifted my body beneath the clothes pile I was in to look at his face.

Forehead crinkled, he was deeply concerned by whatever he'd just heard.

Jay listened some more & then hung up & sat still for a moment.

I contemplated this for a moment, looked at my clunky, brown-clad reflection in one of the massive side mirrors (objects are dorkier than they appear), and had one of those, "What is life?" moments. "How did I get here?" 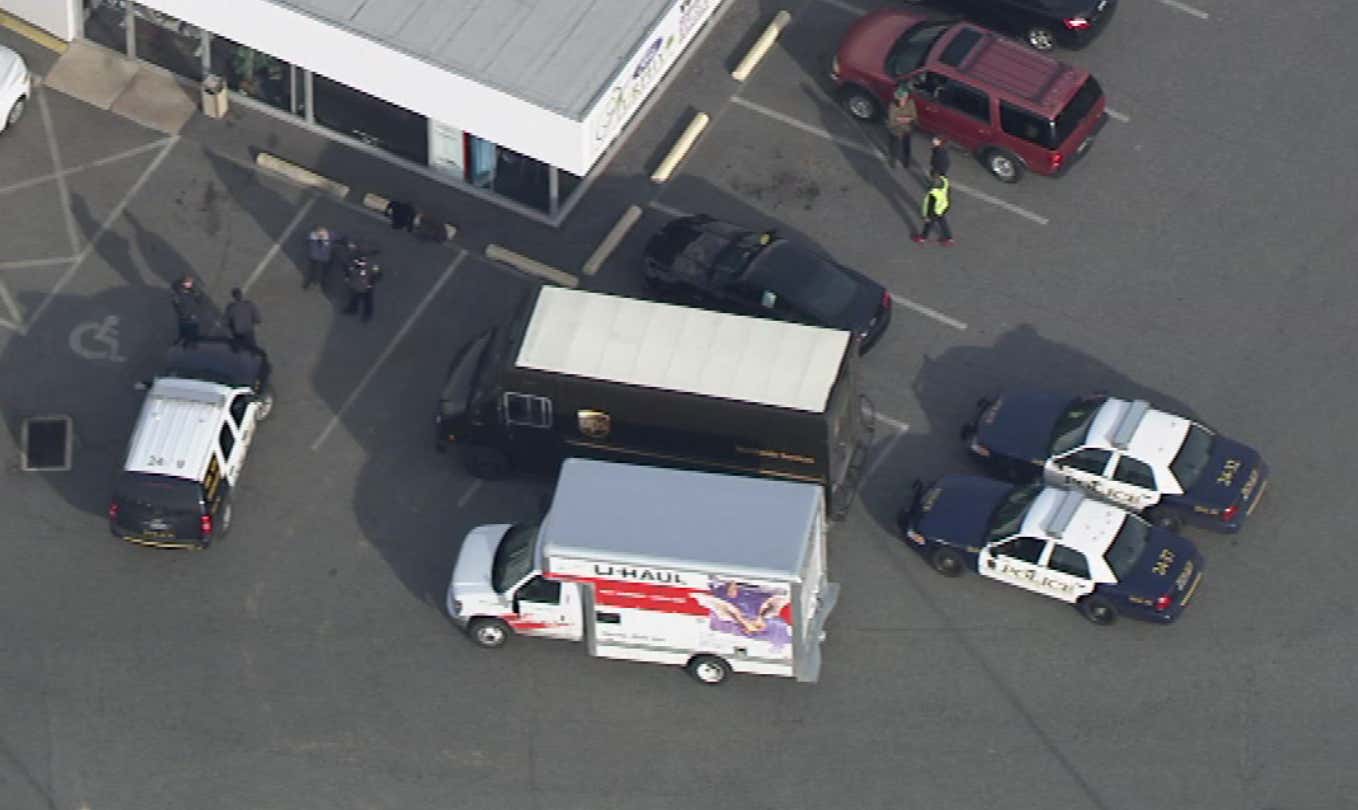 For nearly a month at this point, I'd been by Jay's side. Early each morning he would pick me up from a McDonald's parking lot on Rte 322 & off we'd go, truck filled to the brim with holiday packages.

My first few days on the job I froze my dick off & wondered why he got a door on his side but they didn't put a door on my passenger side.

"I guess they want the helpers to be able to hop in & out quick, but fuuuuck it's cold. How am I gonna do this for a month?"

Finally, on the third day, Jay asked me why the hell I kept my door open since it was about 15 degrees & windy.

Turns out that since the door slid into the vehicle I'd overlooked it somehow, and I'd only ever seen them in my own neighborhoods going slow with that spot wide open, so I stupidly assumed I didn't have one. Lesson learned. He probably thought I was a moron…

..but we still got along well. The trucks don't come with radios but he brought his own boombox & let me pick the stations & we grooved out all day. Jay told me about his wife of many years who he'd met at a rock concert, his two kids who were his pride & joy, and that his dad was the basis for one of the characters on Friends. He even showed me a photo of himself at one of the show's premiers.

In turn, I told him about myself and sort of word-vomited between deliveries. As we coasted through the Wawa-dotted asphalt estuaries of Delco I found myself rambling about the Marines & Afghanistan, finding 'the love of my life', graduating from Fordham, getting a dream job at Comedy Central, losing 'the love of my life', losing that job at Comedy Central, living in my Aunt's basement in Delco, not being able to find a job, working the holiday as a UPS driver helper to keep my broken heart busy (thumping away as I carried heavy packages up steep driveways instead of hammering through the heaves of countless self-wallowing ugly cries for a change…).

And yeah the minimum wage & the cold & the dog shit sucked, but it really did help me to be busy, and physically active, and have an objective listening ear. It was humbling & felt good to put in a hard day's work. It was nice knowing we were delivering the stuff kids would be opening during Hanukkah or Christmas or whatever they celebrate. And it was also a great study in people.

We once went down the world's longest driveway as Jay lugged a dolly carrying a gigantic box & I grasped onto a stack of boxes so high I could barely see. When we got to the door to leave them a woman came running out frantically…

"You have to take those back to the truck! My son is home sick from school today & those are his presents.. I have nowhere to hide them right now!"

Ma'am… we have about 100,000 other awkwardly-sized, pain-in-the-ass packages to drop off today & more boxes will be put in the truck at a link point this afternoon… We don't have room, FIGURE IT OUT.

Jay handled it diplomatically (we helped her find space in the garage) but that's what was screaming off inside my head.

There were also people who'd open their door when they saw us coming and as their slobbery, Sandlot-esque, Hercules beast of a dog came speeding at our shins like they were made of Beggin' Strips, they'd shout, "Don't worry, she's friendly!"

Yes, so friendly she just gnawed the laces off my threadbare boots while I struggled to stay upright. Thank you for laughing & saying, "She's a people person!" as that went down. For the love of God, keep them in the backyard if they're pants-chewing leg humpers. Only let them out to greet delivery folks if they're this kind: 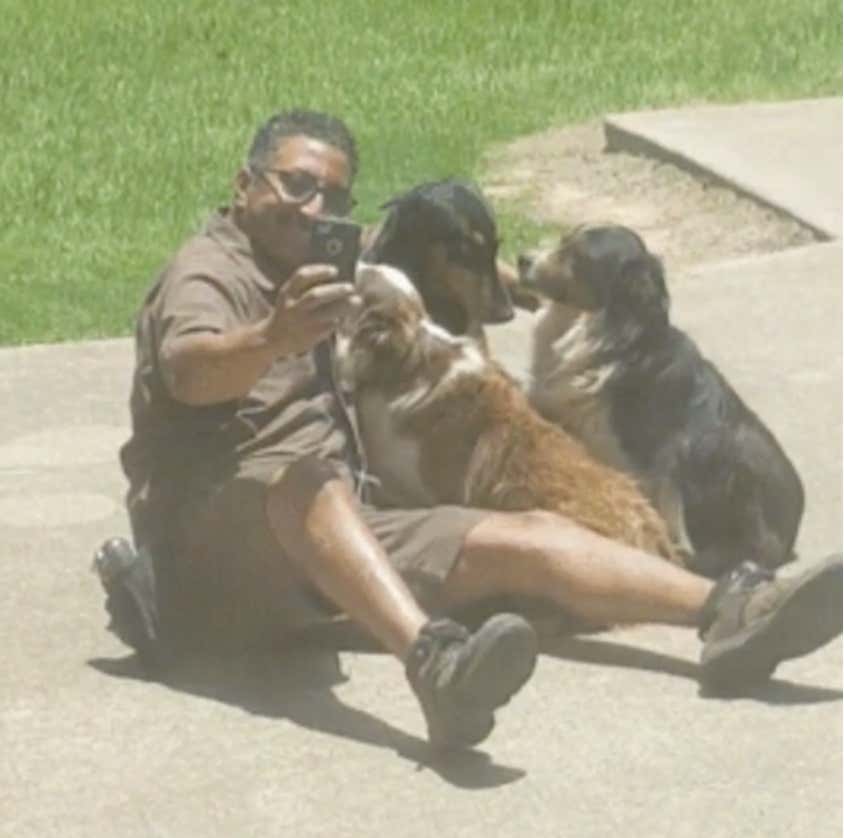 Speaking of dogs, the amount of yards I had to run through made me appreciate the game Mine-Sweeper. Sometimes I lost.

And other times the cold was my saving grace. The snow/frost would cover the worst of it…

Poop & over-enthusiastic dog parents aside, there were lots of great pups along the route that I came to know & love after only a short time. (Shout out to the elderly, gray jowled golden retriever with the one ear that always stood up who'd walk with me to the front door every time we stopped there.)

I also loved seeing all the Christmas lights & holiday pizzazz different neighborhoods had. Some houses drenched every inch in those puffy blow-up lawn ornaments & I'd trip over the strings that tacked them down, and designs ranged from the simple classy classics like garlands & wreaths, to heavy Clark Griswold vibez where I could only wonder at the electric bill.

Some people hated both of those types & used their own decorations as a middle finger to the rest of the 'hood.

As the days passed I learned that my having to pee every 10 min wasn't gonna fly, and would only occasionally have to make Jay stop at Booth's Corner Amish Market to rip a hot one. Not to brag but I quickly got more efficient with the little hand-held scanner device & faster with the drop-offs (probably because of that Fordham degree) and became more of a help than a hindrance.

Soon I was rollin' smoothly on deliveries that took me inside funeral homes, wine-club packaging plants, slightly shady olive oil dealing garages (???), GameStops where customers hounded us about what we were delivering & grabbed at my packages (NES Classic had just been released & people were losing their marbles trying to get it for their kids)… Pshh, I was a pro.

People gave us baggies of cookies & offered coffees & cocoas, and they almost always said 'thank you'.

I also liked that even though driver helpers are very clearly temporary (though UPS makes it seem like you're nearly a shoe-in for a full-time job after this gig during their intake orientation) they still made us helper drones do 'training refreshers' throughout. The friendly reminder that "cocaine can make you feel paranoid, angry, hostile & anxious" was one of my favorites. (They're not wrong, gang! heh heh!)

By the final few days, Jay & I were a well-oiled machine. If one of his kids had a Christmas concert at school, or there was a family event or shopping needed to be done that night, we'd go into overdrive & finish ahead of schedule. Even after pausing on the last day, Dec 23rd, to absorb that a driver a few miles from us had taken a bullet to the shoulder, we charged onwards & dropped off every last Omaha Steaks box, Amazon package, whisker biscuit, honkey lighter, hoosker doo, and hoosker don't in the truck.

When Jay dropped me off at the McDonald's that final night, he handed me an envelope that I opened in my car afterwards. It contained a lovely note & a nice cash tip from his own money.

I know I'm one of the luckier ones, but a lot of driver helpers are doing that job because they need that extra money to help get themselves & their families through the holidays, and I didn't just deduce that because everyone in my orientation class had a neck tatt. In that class (where they taught us how to pick things up & put them down & not do cocaine) that was largely the case & people openly said they took the job because they were desperate. (That, or their mom made them do it so they don't just sit around over college break, but you get the idea.)

So, no, it wasn't where I thought I'd be in life or what I wanted to be doing. No, it wasn't exactly 'fun'. No, the beyond meager compensation wasn't/still isn't worth it for most people, but in a weird way that job was part of the process in 'piecing my life back 2gether'. It wasn't great but it got me on my feet again & motivated me to keep moving forward past it, and I'm glad I had that experience.

Much respect to anyone out there on that grind. May all the dogs in your zone be friendly, may all their turds be frozen, and may you get to be in one of those viral Ring videos dancing about snacks left out on someone's stoop. Happy holidays.