I can't emphasize enough just how much I love this guy. Everyone knows that feeling and almost everyone around Chicago has been in this exact situation: terrifying gridlock en route to O'Hare.

What makes this so beautiful is that it's Sunday night Thanksgiving weekend. Maximum scaries, minimum hope.

Without much effort, I think we can all reasonably assume traffic to be inevitably fucked 10 ways from *checks calendar*  Sunday. You gotta be some kind of asshole to bomb like this but you also gotta be one crazy son of a bitch to sprint down 190 with your carry-on. How crazy? Let's talk details:

We can tell from the picture that we're 1/4 mile out from Manheim on I-90 aka The Kennedy. That's what the M stands for next to the 190 West Exit

And I know if we're 1/4 mile out of Manheim then we're at about 2.5 miles from the airport which should hopefully put that traffic in some context. And if it doesn't, here's some GRAMMAR SCHOOL(1) math that won't fail: at about 5 miles an hour, you're looking at a good 30 minutes to get to the airport over that track.

You're getting anxious so you go to Google Maps, which makes you more anxious because you've been meaning to update Waze but it's so annoying and tedious because you don't trust Apple to leave updates on automatically and Waze needs constant updating. It's a crossroads.

You use Google Maps.

Inexplicably, that number rises to 36. You almost snap but stay cool. It would ruin the otherwise meaningless conversation that's been flopping around the 2018 barebones Nissan Sentra. Your driver is polite but bland. A Serbian flag hangs in his mirror. He senses the mounting anxiety.

How the fuck does this thing keep going up? Does Google know I board in 45 minutes? Or that you have a connecting flight into Charlotte with every other motherfucker flying into Charlotte?

Actually yeah Google probably knows literally everything about you and me but that's beside the point.

Point is you're next step is the the most depressing thing you can do in traffic. You switch to Pedestrian View to see how long it would take to arrive by foot. And this is where good hustle can bring back the old mapquest vibe of shaving 25% off the initial route. You can't do that with how accurately all the satellites are positioned these days. But when Google gives out walking directions, they assume you're an average overweight 43 year old human being. They don't account for how bad you fucking want it.

So when it says 49 minutes, you know a long stride and aggressive pace gets you there in 35, especially since you're on the shoulder of an expressway and don't have to wait for stoplights. All Gas No Brakes. But then add back another 4 minutes because you're dragging the carry-on and that shit wears on your shoulder. 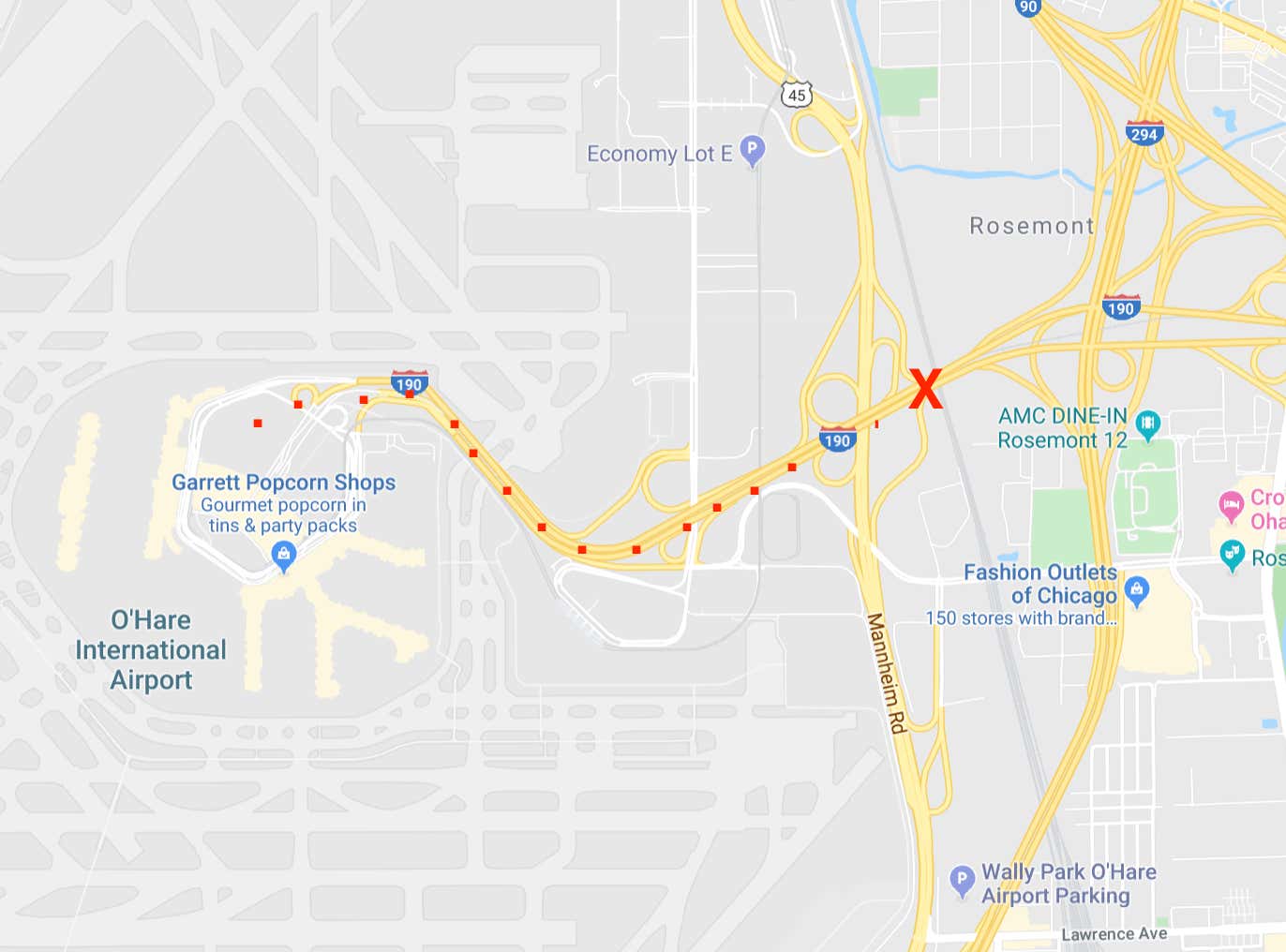 Ipso Facto this is a frantic 39-minute voyage on foot born from pure rage and I love everything about it. You know this dude absolutely bulldozed the security line. Sweating uncontrollably, smelling like your buddy's hockey equipment, ignoring all conventional societal standards, all in the sake of air travel. Hopefully this guy made his flight.

And if he didn't, fingers crossed he went big at the local Scores.(2)  Idk why but he strikes me as a big strip club guy so at the very worst maybe he made in time for the late buffet.

Either way I think we can all agree O'Hare sucks and this shit would never happen at Midway. If you thought I'd go an entire Chicago airport blog without circling back on this then you are very stupid and probably prefer O'Hare.

(1) Grammar School = Elementary School and this is the 2nd time I'm leaving this footnote. It's a Chicago thing.