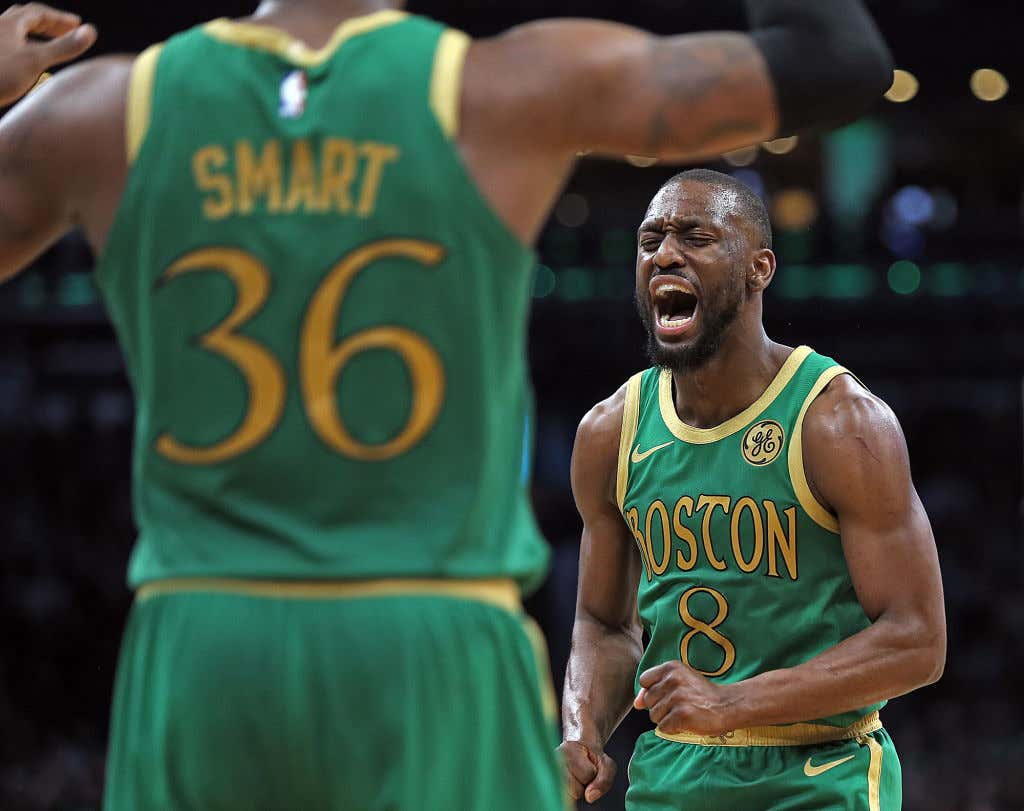 First and foremost, happy Thanksgiving everybody. Best day of the year no doubt and hopefully you spend the day eating way too much and doing nothing but avoiding your family and watching football. In an effort to help you with one of those things we couldn't take the day off and not blog about last night. It was always going to be an emotionally charged night, you knew that the second the schedule came out and we saw the home and home matchup with BKN. You also knew there was no way Kyrie was going to play in that game, both of which ended up being true. Seeing as how this is a day to give thanks, I think I'm not alone when I say I am thankful for the 2019-20 Celtics. I'm thankful so far this season all of the bullshit that clouded this team at this time last season doesn't exist. I'm thankful Kemba Walker walked away from that scary injury perfectly fine and better than ever, I'm thankful for Brad Stevens and his ability to overachieve, I'm thankful for the two Jays taking more and more steps towards stardom with every game they play, I'm thankful for Daniel Theis turning into Dikembe Mutombo and giving this team some much needed rim protection. And most importantly, I'm thankful for you all, the stoolies that click and read this blog to ride this incredible journey with.

With all that said, let's talk about what we saw last night

- When the Celtics signed Kemba Walker, they were hoping for not only a breath of fresh air in the locker room, but also someone who could help fill in the All NBA production that the team had just lost in Kyrie Irving. Well, through 17 games I think it's fair to say that not only has Kemba delivered off the court, but what we are seeing him do on it has been pretty special. Especially in this game

Keep in mind, he also had 4 points clearly robbed from him on a 100% shooting foul taking a three so his final line doesn't even really do him justice. When this team needed to rely on their star PG he was there for them, especially in the fourth quarter where Kemba had 9 huge points on 6-9 shooting. It was pretty vintage Kemba for the most part, huge threes off a high screen to answer a big BKN bucket, getting into the paint and finishing at the rim despite there being shot blockers everywhere, and it didn't hurt that this type of performance came on Kyrie Night.

Just how good as Kemba been in this building? I dunno, this feels good

I really liked how Kemba continued to attack Jarrett Allen which on the surface doesn't seem like all that smart an idea, but the way Kemba has figured out how to use his body to create space to get his shot off/draw contact is what makes him so effective. He did it all the time in CHA and it is eerily similar to how Isaiah used to get the same results during that electric 2016 season. No surprise he also led the Celts with 7 FTA.

- There was a time where people were upset with the Jaylen Brown extension. There was a time when people wanted him traded from this team last year when he had his slow start due to his injured hand. Maybe now people will understand Danny Ainge knows what the fuck he's doing

There is no other way to say it, watching the development of Jaylen Brown has been incredibly intoxicating. Everything we wanted to see from him is starting to blossom and he is having himself an All Star caliber season. The defense is there (I had him down for only 1 truly bad defensive possession), the handle is 100000x better, his three point shooting has come around (36% with just under 2.0 a night), and his offensive approach is exactly what this team needs from him. Everything is aggressive and to the rim for the post part and last night was no exception. Almost half of his FGA in this game came from the free throw line or closer. He's improved his post game, he's drastically improved his finishing at the rim, and nothing seems forced. You want to look at why this team is off to such a great start, Jaylen's leap has to be near the top.

- This is starting to get a little weird. How on earth do the Celtics outrebound ANYONE 55-38? They once again owned the points in the paint 46-38, same with second chance points 25-10, and fast break points 21-13. I don't know where this is coming from but I would very much like it to continue, especially the rebounding part. Credit the wings, with 19 rebounds coming from Jaylen/Tatum.

- Speaking of Tatum, there's no denying his efficiency continues to be dogshit. I'm talking my Saint Bernard's sized dogshit. On the surface that's not great, his 5-17 and 0-fer from three is going to have to be figured out there's no question. But you know what's different this season compared to the previous two? We're not seeing these shooting struggles poison Tatum's entire night.

I don't think anyone would complain about 16/9/5 with 6 FTA and good defense. Again, nobody is saying his efficiency doesn't have to get better, but we're still seeing Tatum make an impact despite his shooting struggles which to me is a sign of growth. I don't think we're seeing the same issues with Tatum's shot selection like last year, the dude just needs to see the ball go through the hoop to snap out of it.

- I'll admit, when Enes Kanter first put out that video of the City Edition jerseys I hated them with a passion. Then more pictures came out and they didn't look as bad and nothing made sense. I wanted to see how they looked on TV before coming to my final conclusion, and you know what? Not terrible! Certainly not on the grey with sleeves level, but not quite the vintage Big 3 era St Patty's day level. They were……fine. Which to be honest given what some other teams are rocking feels like a win.

- I could understand the excitement when Tremont Waters came in against SAC and basically saved the game. Plenty of stoolies were hitting me up saying it was time to give him Brad Wanamaker's minutes. They were a prisoner of the moment and honestly who am I to judge? I've been there and I'm sure I will be at some point this season. But let's be serious for a second here, Brad Wanamaker has been fucking AWESOME in this time without Hayward. I mean truly awesome.

another 10+ night off the bench with over 50% shooting and make no mistake this isn't a fluke. Look at his November since Hayward went out

if that isn't the very definition of solid backup point guard play I don't know what is. There's a reason Brad trusts him and you're seeing it these last handful of games. So no, nobody should be stealing minutes from Wanamaker, if anything he should be getting more.

- Seriously though, every pundit said all summer that the Celtics were fucked because of their big man situation. In fact we're still seeing people say they need to trade a valuable piece for a defensive big man. I'm sorry, do none of these people know Daniel Theis exists?

His 60.5 BLK% is not only the highest of his career, but it's 4th in the NBA among centers that play as much as Theis. Better than guys like Anthony Davis, DeAndre Jordan, Andre Drummond, LaMarcus Aldridge, Steven Adams, Montrezl Harrell, the list goes on and on. We had seen flashes of his rim protection in his first few years, but nothing like we're seeing this season and it's a huge reason why this defense continues to be around the top of the league.

- One thing that doesn't really make sense is whatever the hell the Celtics are doing recently when it comes to defending the three. Basically, they aren't. It was one thing when Buddy Hield came into this building and made 11 (check his box score from last night, the dick), and the Kings made 18 as a team. But then here comes BKN and they make a total of 21 3PM and I have to ask is Brad going to make an adjustment here or what? I'm going to go out on a limb and say you aren't going to be 2-0 very often when teams make a combined 39 3PM against you. It's what kept BKN in this game, it's what kept SAC in that game, and for a team that is supposed to pride themselves on perimeter defense this shit needs to be fixed.

You want to say some of them were junk that happened to go in? Fine. But again, the Nets made 21 3PM and they were not all junk.

- People telling Boston fans to get over Kyrie. This shit is so annoying. You don't pull what he pulled last year, and I'm not even talking about him leaving, I don't give a shit about that. I care more about what we saw in that MIL series. That's where my problem is. People can change their mind and shit can happen in their life, that's all good. What isn't good is clearly quitting on your team in the ONE series we needed you in after talking all year about how nobody had to worry because you were on this team for the playoffs.

Welcome to sports. Fans who are passionate about their team are going to boo and enjoy talking shit. Now he wants to be the victim with all that shit last night? Pathetic.

- You can't mention the word pathetic without talking about the bench production outside of Wanamaker. Woof city. All non Brad second unit players combined to go 2-16. That's not even close to being good. Not sure where Carsen's buckets went but they are missing and have been all year.

- I'm still confused how this keeps happening at HOME

honestly a pretty brutal night for both sides with the officiating and honestly the league needs to figure that shit out.

- What the hell was that second quarter. Allowing 40 points on 65/62% shooting with 10 3PM? Everything positive you did to start the game immediately wiped out? I'd say I'm surprised but this is the worst second quarter (and first quarter really) team in the entire league. Boy was that gross.

So here we sit, 13-4 in 2nd place in the East and perfect at home. Considering the Bucks may never lose again, these wins are important with teams like TOR and MIA right there. It'll be interesting to see how this team responds on Friday since home and homes are always tricky when it comes to winning both, and who knows maybe Kyrie will actually play now that he's in his own building. All I know is if there's one thing this season has told us so far, it's that this team does not miss him one fucking bit. Are the Celtics better without Kyrie? It sure as shit seems that way.