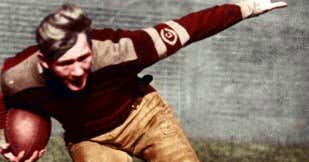 It is a one-man show on Thanksgiving in Comiskey Park, as the Chicago Cardinals crush the Chicago Bears 40-6. All 40 points by the Cardinals are courtesy of Ernie Nevers. Nevers has six rushing touchdowns and four extra points to become the first and only player with 40 points in an NFL game. The six rushing touchdowns also established a record that has yet to be topped.

Ernie Nevers was born on June 11, 1902, in Willow River, Minnesota. After his family moved to California, Nevers starred at baseball and football Santa Rosa High School. From there, he moved on to Stanford, where he became an All-American under the guidance of Coach Pop Warner. Ernie Nevers’ professional career began after the 1925 season with a team in Jacksonville that played an exhibition against the Red Grange and the Chicago Bears.

At the same time that Ernie Nevers was NFL career was starting with the Duluth Eskimos, he was spending his summers pitching with the lowly St. Louis Browns. His career in the majors last three seasons, posting a record of 6-12. Nevers would pitch in the Pacific Coast League for a few seasons. At the same time, it appeared his NFL career was ending too as he served as an assistant coach with Stanford in 1928 as the Eskimos ceased operations after the 1927 season.

Ernie Nevers returned to the NFL with the Chicago Cardinals in 1929 and became one of the NFL’s top stars. Besides playing fullback for the Cardinals, Nevers was a kicker, setting up his historic Thanksgiving feast of the Bears. It was a down year for the Bears and coach George Halas who entered the game at Comiskey Park with a record of 4-6-1, while the Cardinals where not better under Dewey Scanlon at 4-5-1. The teams had played to a scoreless tie at Wrigley Field on October 20th.

With Ernie Nevers scoring three touchdowns, the Cardinals raced out to a 20-0 halftime lead. The Bears lone score came 60-yard pass from Walt Holmer to Gardie Grange in the third quarter. From there, it was all Cardinals as Nevers had three more rushing scores. Besides the six touchdowns, Ernie Nevers made four of six PAT attempts for the record 40 points.

The Cardinals would finish the season with a record of 6-6-1, while the Bears stumbled to a 4-9-2 mark. Ernie Nevers would have a brief career but was among the top stars ever season, later serving as player-coach with the Cardinals in 1930 and 1931. Ernie Nevers retired to go into coaching in 1932 and remained a coach for the rest of the decade. He would be among the inaugural class for the NFL Hall of Fame in 1963.