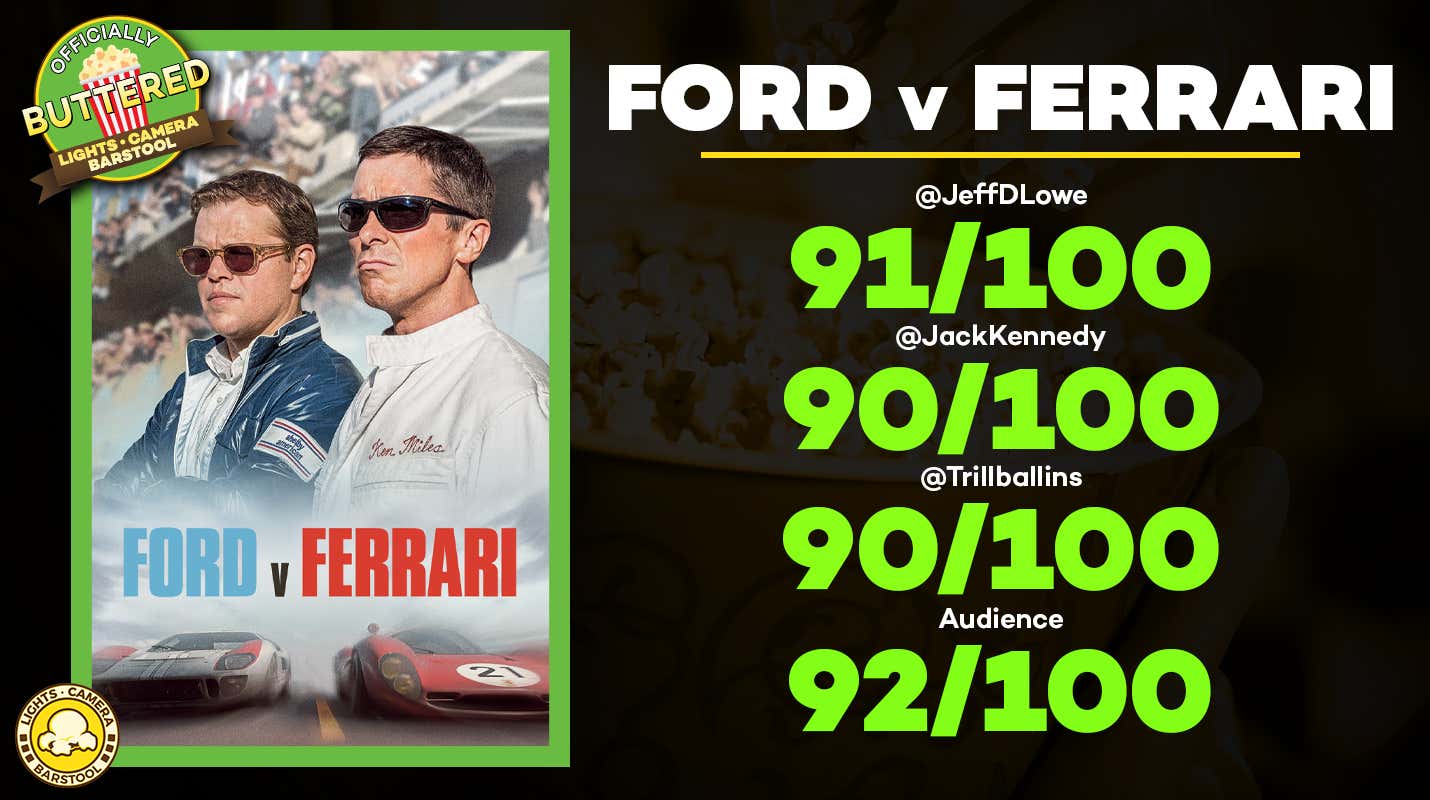 American automotive designer Carroll Shelby and fearless British race car driver Ken Miles battle corporate interference, the laws of physics and their own personal demons to build a revolutionary vehicle for the Ford Motor Co. Together, they plan to compete against the race cars of Enzo Ferrari at the 24 Hours of Le Mans in France in 1966. (via Google)

JeffDLowe (91/100): ‘Ford v Ferrari’, a rare big-budget old-school Hollywood production, is one of 2019’s top releases and without question one of the best racing movies to ever hit the big screen. The combination of Christian Bale and Matt Damon added on to the stunning set pieces and cinematography pushes this movie above its much-hyped finish line.

When you take a look at all of the racing movies that have been released over the years, the good ones are few and far between. ‘Rush’ from Ron Howard is the last one I would call “great” and it remains one of the more underrated movies of the decade…

Much like ‘Rush’, ‘Ford v Ferrari’ is beautiful to look at, and it’s the biggest reason why the movie succeeds with ease. It’s flashy, yet gritty, style takes you right into the heart of a sport that isn’t easily captured on film. Everything about the movie feels real, and that’s because it is real. The detail that director James Mangold (‘Logan’, ‘Walk the Line’) put into ‘Ford v Ferrari’ is evident and it really should be experienced in a theater.

The movie flows at a perfect pace and the script and characters are incredibly easy to connect with emotionally. Bale and Damon, as well as the rest of the supporting cast, have a chemistry that would make you think they’ve been preparing for this movie for decades. There are endless enjoyable moments, laughs, and some heart-string-tugging moments that make up for the fact that the story is fairly cookie-cutter for its genre.

There aren’t many flaws in ‘Ford v Ferrari’ and it was wonderful to see because this was a movie many considered to be a strong contender right from the start of 2019. It’s not often that we get to see a big-budget movie outside of the franchise-reboot-sequel space. and because of that, I can’t suggest enough to run to the theaters to see ‘Ford v Ferrari’.

KenJac (90/100): ‘Ford v Ferrari’ is a testament to how great production value, experienced actors and a concise directorial vision can make a riveting story out of subject matter that audiences otherwise might not be interested in. This story is one that is essentially built for suburban dads to enjoy, and yet I found myself entirely captivated from start to finish. There are some missteps for sure, but you will find your heart racing faster than the cars as the tension builds and releases multiple times throughout the movie.

Christian Bale is the star of the show as the emotionally unstable and deeply passionate driver, Ken Miles. Bale is one of the GOATs, and he shows us why yet again with a fantastic performance, making you sympathize with his plight vs “The man”. Matt Damon is similarly great as the charismatic Texan, Carrol Shelby. I did NOT realize that was an accent that Damon could pull out like that, and it actually worked quite well. Our good boy Jon Bernthal also killed it as legendary auto exec Lee Iacocca (Interview below)

Like I mentioned earlier, I’m not a huge car/racing guy. I got a free, but broken 1993 Jeep Grand Cherokee when I was in high school that my dad and I spent a month repairing, but that is more or less the extent of my car knowledge. However, the way James Mangold crafted this movie made it more than simply easy to digest for a layman like me, he made it really captivating. Like I mentioned before, the production value was off the fucking charts. It uses practical effects over CGI wherever possible which is something I personally LOVE. You may or may not feel as if Mangold transported his entire cast and crew back to the 60’s to film, then brought them back. It’s THAT real. The actual story is, thematically speaking, one you may have heard before. Innovative minds being silenced and told to follow the status quo by corporate fat cats. However, Mangold weaves in a great story of friendship, fatherhood and good ole American ingenuity which makes this unique and fresh feeling.

My co-host Trillballins said it best: ‘Ford v Ferrari’ is an easy first-ballot vote for the Dad movie Hall of Fame. If you and your pops are looking for a movie to see this holiday season, this is the one.

—
The movie is Officially Buttered with all four combined scores meeting the 69/100 threshold. We did an in-depth review of the movie on Lights Camera Barstool but will be diving into ‘Frozen II’ and the Mister Rogers movie, ‘A Beautiful Day in the Neighborhood’ on our next podcast episode. Make sure to rate all 2019 and 2018 movies in the links below.