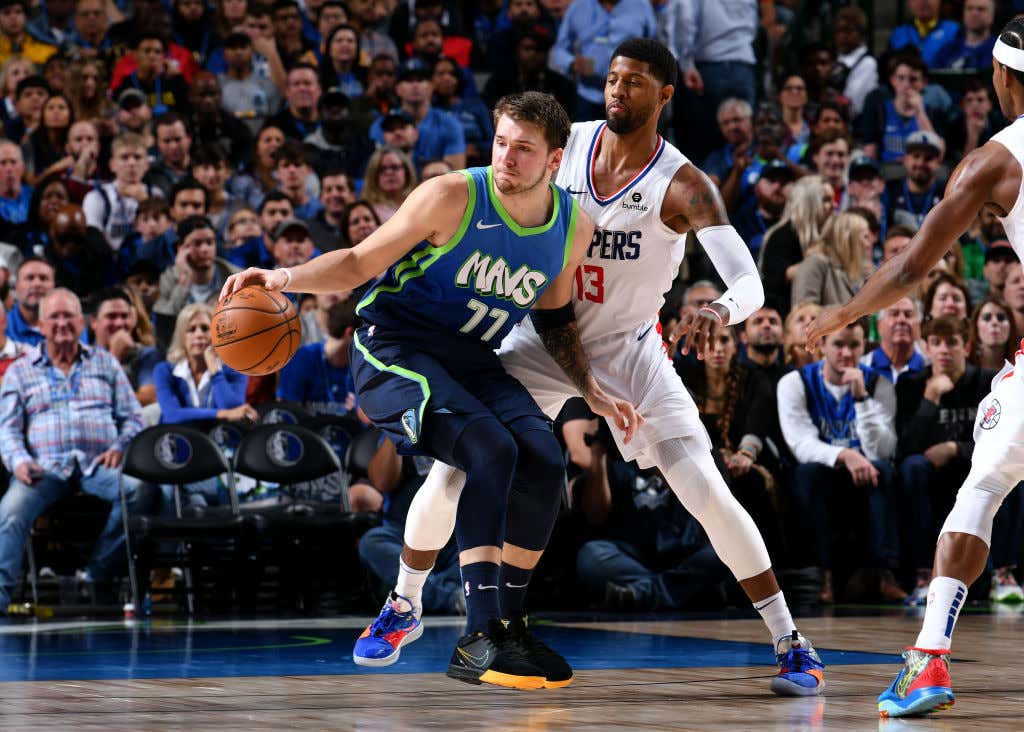 Good morning everybody happy Wednesday and welcome back to another edition of Last Night In The NBA where we bring you up to speed with everything that went down from the night before in the Association. Now if you're already home and you're looking for something to help avoid your family, unfortunately the NBA does not care about you because they only had two games last night, and neither were particularly close. But hey something is better than nothing so if you were traveling or maybe watching CBB last night and missed the action here's what happened.

Most teams have not been able to make Luka Doncic look human, but the Clippers aren't exactly most teams. Given how exciting the Mavs have been to start the year, this was a pretty big matchup since the Clippers weren't resting either of their stars. A good measuring opportunity if you will for Dallas to see how they stack up against the best of the best. The results were mixed, with Luka having moments but realizing Kawhi/George are a different beast defensively

it feels a little weird saying the Clippers shut down Luka when he almost had a triple double, but he shot just 4-14 from the floor and 0-8 from three. I don't know if it was the Clippers defense or those gross City Edition alternates but I feel like both played a role in what we saw in this game. Can't play well if you look like trash, everyone knows that.

Now if Luka has an off night the Mavs are already kind of screwed, but if nobody else is able to step up and provide some legit offense outside of a little Porzingis

who had maybe the WORST fake tan I've ever seen and I went to Arizona State, I just don't see how the Mavs stood a chance. As a team they shot just 38/28% and had 20 TOs. Yeah no shit you're going to get blown the hell out against a Clippers team doing that shit….at home. But hey, they played LAC even over the second half, but you give up 64 points over the first 24 minutes you're screwed.

For LAC, so it's pretty terrifying that the Clippers are this good this early while not even having a ton of time playing together. You'd think there would be growing pains and guys taking some time to figure out their roles but nope

as you expect Kawhi/George carried most of the load for the starters, and then once it was time for Doc to make his standard substitution and insert known bucket Lou Williams into the game guess what he did. That's right, he got buckets

they didn't even really need their other super sub Montrezl Harrell who only had 12/7 but was a +19. It's not like the Clippers shot all that well either, just 42/33%, but when you can defend like this and you have the offensive firepower they do on the floor at all times, you see why the Clippers are considered the best overall team in the league.

You can't talk about wagons in the West without mentioning the Nuggets. And while nobody is surprised that they were able to handle the Wizards, let's not pretend like WSH doesn't have one of the best offenses right now in the league. You may not want to believe that but it's true, so for DEN fans to see their team actually defend is a great sign.

but you see much like LAC, where DEN really gets you is with their depth. This team rides like 12-13 players deep and they can all play. Jerami Grant has come in and looked fantastic for the Nuggets so far this season

and you combine that with Plumlee doing Plumlee things and Monte Morris being solid in his 23 minutes, the Nuggets were able to use a big second quarter to get some separation and the rest was history.

I know there is going to be a lot of talk between LAC and LAL and rightfully so, but do not sleep on the Nuggets, they are really good.

For WSH, it was a return for Isaiah which was cool and all, but then he went 1-8 which was way less cool. Same goes for Bradley Beal who went 6-15 (2-10). Not great and also not how you beat one of the best teams in the West. Basically it was Jordan McRae

and the second unit that really did anything

Listen the Wizards are 2-6 on the road so this shouldn't come as a surprise, but I am surprised they only had 104. I was expecting this game to be a Mile High shootout, something crazy like 130-125 given that's how all their games have looked and this was two high powered offenses, but if DEN is going to start defending then watch out.

And that's it! You're now all caught up with everything that went down last night in the NBA. Hopefully this helped you avoid your family for a little bit, have a great Thanksgiving!