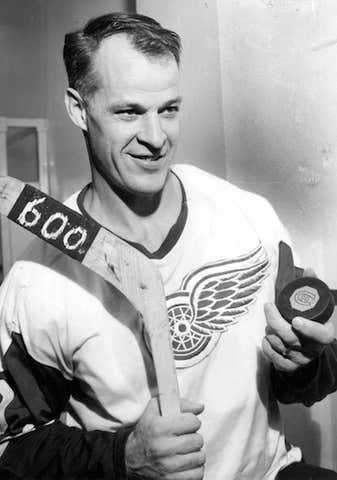 Gordie Howe of the Detroit Red Wings becomes the first player in NHL history with 600 career goals. The milestone comes in a 3-2 loss to the Montreal Canadiens at the Montreal Forum. Howe would play another five seasons with the Red Wings, retiring with a record 786 goals. He would return to play in the WHA and returned to the NHL in 1979, adding another 15 goals to finish at 801.

Born on the Canadian plains of Saskatchewan, Gordie Howe was born to play hockey on March 31, 1928. As a teen in Saskatoon, Howe became one of the most sought-after players with the New York Rangers and Chicago Black Hawks each express interest. Eventually he would choose the Detroit Red Wings, playing Junior Hockey with the Galt Red Wings of the Ontario Hockey League.

Gordie Howe made his NHL debut with the Detroit Red Wings in 1946. Being ambidextrous, he was able to shoot with both hands, proving to be a deadly sniper on the ice. Skilled on both ends of the ice and tough, Howe became known for his own unique Hat Trick. This helped earn him the nickname “Mr. Hockey.” The “Gordie Howe Hat Trick” consisted of an assist, a goal and a fight in the same game.

Maurice Richard retired from the NHL in 1960 as the league’s highest goal scorer with 544 goals; that same year, Howe passed him for most points in a career at 949. In 1963, the inevitable happened as Gordie Howe claimed the all-time goal scores record. Gordie Howe also was the first to score 1,000 points in a career, doing so on November 27, 1960. Five years later, to the day, he became the first player with 600 goals.

Gordie Howe retired from the Detroit Red Wings in 1971, with 786 goals. However, after two years, he received an offer to play alongside his two sons, Mark and Marty, with the Houston Aeros of the WHA. Howe proved he was still a star, winning the WHA MVP in 1974 as he led the Aeros to the first of back-to-back AVCO Cup Champions. Howe and his two sons later ended up on the New England Whalers as the WHA began to go under. By landing on the Whalers, Gordie Howe found himself back in the NHL when the team was one of four adopted by the NHL.

At the age of 51, Gordie Howe was still bringing excitement, scoring 15 more goals with the rebranded Hartford Whalers, and finishing his career with 801 goals and 1850 points. Both records would be topped by Wayne Gretzky who was joining the NHL as Howe was saying his last goodbyes in Hartford. His 801 goals still rank second all-time behind the Great One.