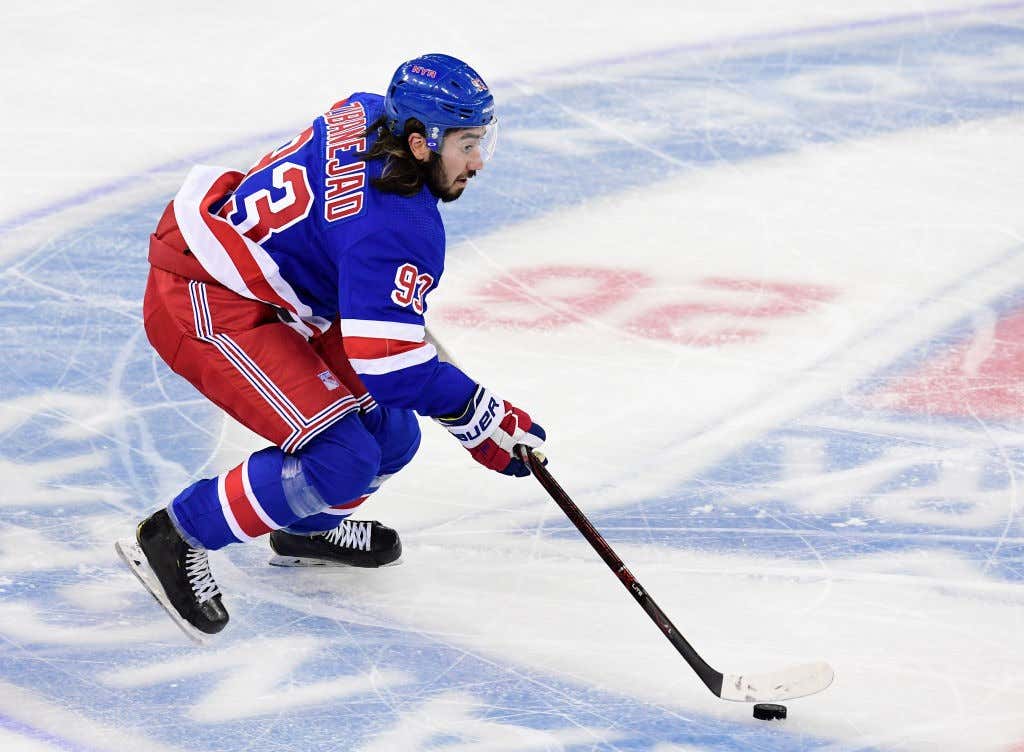 After opening the season with a pair of wins, the Rangers fell off a cliff in a big way. A 1-5-1 stretch had fans scratching their heads wondering what the hell the issue was. Then it all became crystal clear. Mika Zibanejad missed the next 13 games and the Blueshirts have piled up the 4th most points in the East over that span. After their second straight comeback W last night they’ve pushed their Zib-less record to 8-4-1. Now, just as things seem to be going well, it looks like Zibanejad will be back to ruin everything for tomorrow’s home tilt vs the Canes. I just hope Quinn sticks to his mantra and makes him re-earn his minutes…

OR PUT THE KZB LINE BACK TOGETHER LET’S GOOOO

With Chytil getting a maintenance day, it’ll be interesting to see what Quinn does tomorrow behind #93. It’s pretty obvious Howden will slot in on the 4th line but will the dynamic duo of Panarin & Strome stick together? Only the Wonder Twins in Edmonton have scored more than The Breadman has sans Mika while Strome has piled up an impressive 4-10-14 line assuming Zib’s role. While it’s a tough move to make, splitting them up would be the correct one. Why? Well we’ve been waiting long enough for Filip Chytil to develop enough to become a mainstay at 2C. Since his call-up, he’s buried 7 goals (second-most on the team for the season despite a 9-game handicap). The kid is clearly skating and battling like he belongs.

Quinn’s said all along nothing is promised. Everything must be earned. Well, after disappointingly earning an AHL demotion to start the season, Chytil has done exactly that and deserves to stay up with upper-tier talent. For as much as Panarin & Strome thrived together, they were both essentially point-per-game guys before Mika went down. Panarin is gonna score with anyone while Strome’s not only a veteran, well-rounded presence between Kakko & Lemieux but an obvious offensive upgrade over Howden. Both of those youngsters have recently hit their scoring stride as well – flanking Strome over Howden certainly won’t be the reason that stops.

But that’s why I’m not an NHL head coach:

So the Strome/Panarin tandem will remain in effect – although obviously lines are fluid. I’m a bit surprised Quinn is willing to put such a young, inexperienced trio together in Kakko/Chytil/Lemieux. Granted he didn’t commit to a second-line RW, but I gotta think if Kakko & Fast were swapping spots then the rook would’ve been practicing there. Kakko is an elite talent but has a lot of learning to do in terms of his all-around game. While Chytil has been excellent, he’s not exactly the type of pivot that can make up for Kakko or Lemieux’s mistakes because he’s still busy learning how to make less of his own. I feel like part of Chytil’s success has been due to the sense of stability skating alongside a vet like Kreider or Panarin brings. Now he’s going to be tasked with the burden of making sure his line isn’t steamrolled in their own zone & stapled to the bench. Strome is no Selke candidate but makes more sense in that type of role while Chytil’s confidence is left untouched centering the squad’s top weapon. We’ll see how it goes.

Truth be told, Zibanejad’s injury was a blessing in disguise. Of the three wins Zib was healthy for he was single-handedly responsible for a pair of them with back-to-back 4-point games. They were way too top-heavy. Plus, who knows when we’d have seen Chytil on the big stage. Kreider, Buch, Kakko, Lemieux, etc. have all found their games to varying degrees and now Quinn is aware that, at full strength, he’s got a pretty formidable top-9 group. A young squad probably tanks more times than not without their best all-around player. Not only have the Rangers survived they’ve succeeded. There’s no better way to build confidence than that. Now, with Mika back, maybe a wild card push isn’t such a crazy idea after all…