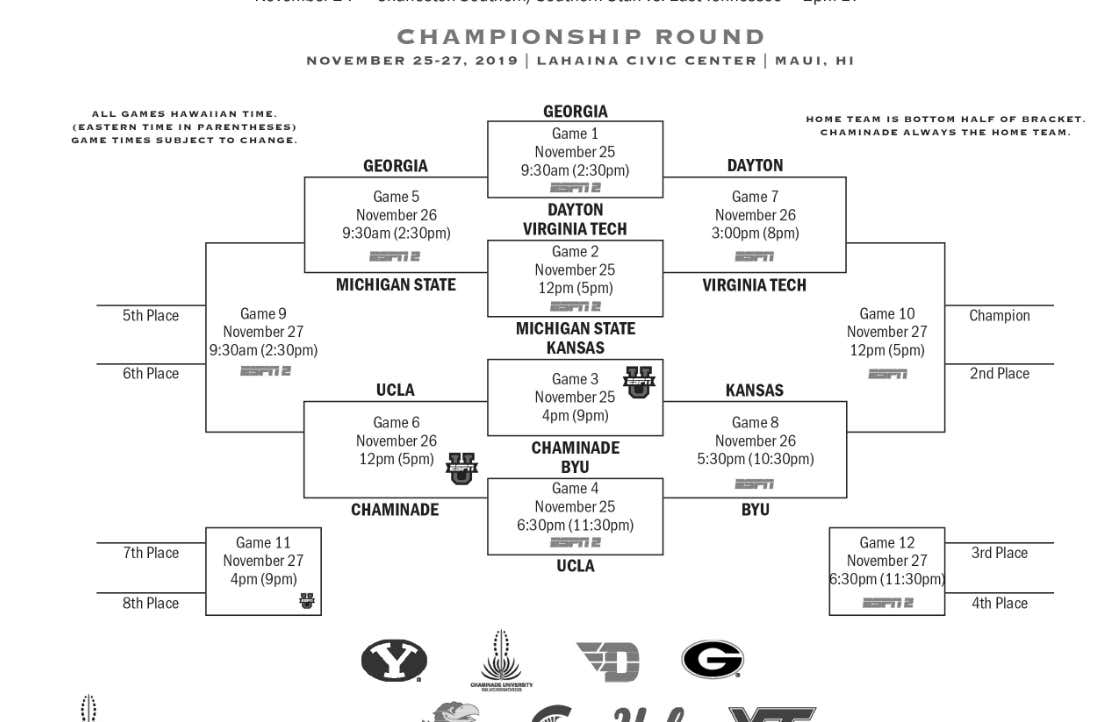 Thoughts: So much for that Michigan State vs Kansas guaranteed final. We've talked enough about them, that we sort of need to pay more attention to Dayton and Virginia Tech. One of these teams will be getting the massive bump from getting to the title game in Maui. Along with that more people will be talking about Obi Toppin (Dayton) and Landers Nolley (Virginia Tech). I am curious to see how Michigan State bounces back though. Losing to Kentucky on opening night is one thing, losing as an 11 point favorite is a bit different. It's a quick turn around with a really good guard in Anthony Edwards.

Speaking of Michigan State here we are with them against Tom Crean and Georgia. If you're a Michigan State fan you have to be a bit pissed at Tom Izzo yesterday, his decision to sit Cassius Winston with two fouls in the first half ultimately hurt MSU. You penalized your own team by refusing to put him in when MSU's offense was stagnant. You have to trust Winston in that situation. So today I expect a bounce back game, especially since Cassius Winston kinda did shit yesterday. I like Anthony Edwards a lot at Georgia, but this is a young team. We'll take the bounce back.

I'm really looking forward to this game. Here's the thing though. Dayton's defense really picked up against Georgia however they are going to see a completely different team here in VT. Dayton doesn't give up a ton of looks from three, however they tend to sag in the lane and give up open looks, which is why from a percentage standpoint they aren't great at guarding the three. Virginia Tech wants to spread you out, beat you off the dribble and kick. They will hoist up a million threes tonight. The concern for VT is being able to contain Obi Toppin - Dayton's star. The Hokies play a smaller lineup and Dayton wants to use a bunch of motion to put Toppin in either ball screens as a pick and pop guy or get him ISO'd on the low block. It feels like a mismatch on both sides.

Simply put these are two even teams. Why Colorado State is getting over 3 is a bit baffling. Loyola can get overwhelmed a bit - see the second half of South Florida yesterday. They want to pound the ball to Cameron Krutwig and play out of the post. Good thing for Colorado State is they have Nico Carvacho to match him.

This is a bit adventurous with the number being 158, so if you can get San Francisco's team total over, take that. Here's why. Hampton STINKS defensively. They just gave up 120 to Illinois. They want to run and gun and give up open looks. San Francisco is one of the most analytical teams in the country and are playing Moreyball based on layups and threes. They will shoot a ton of threes today. We're hoping for those to go in and take a high scoring game.

I'm a bit pissed I didn't jump on this when it opened since it was Auburn -8. This Auburn team is damn good and that's saying a lot for Bruce Pearl. What I like about Auburn is their ability to be versatile and force you into their tempo. On top of that in the blink of an eye they'll be at 90 points and you're not sure how. They'll throw different looks at Grant Golden and the guards for Richmond and I'm not sure who slows down Samir Doughty.