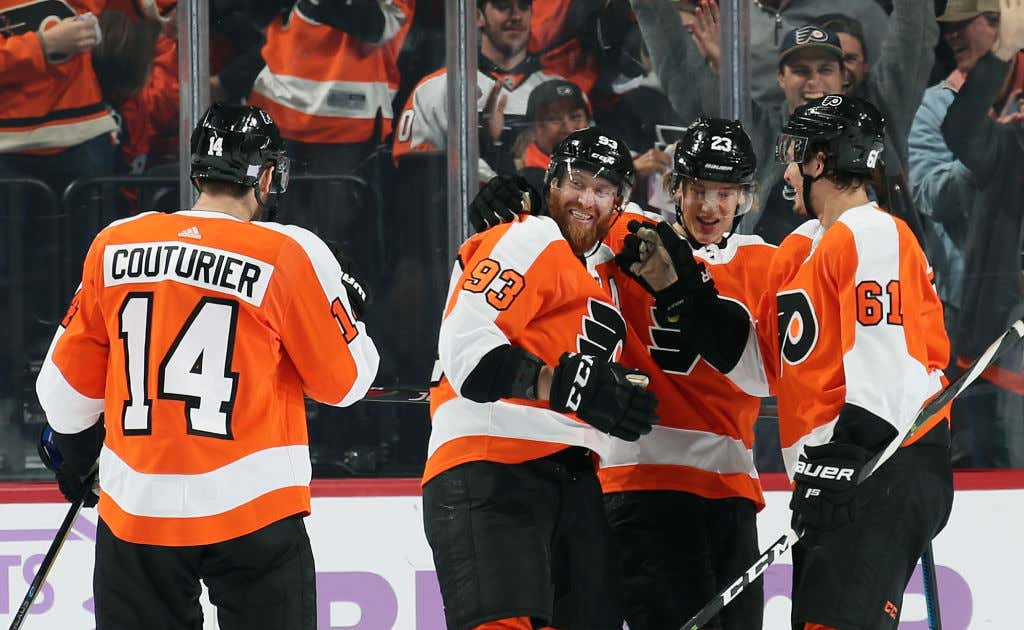 For the longest time ever, I thought that maybe the Flyers just loved hockey more than any other team in the league combined. We're just getting to Thanksgiving and the Flyers have already gone to a shootout 8 different times so far this season. This team has played more hockey than anybody else. 60 minutes? Not enough hockey for these rink rats. 65 minutes? Not enough hockey for these rink rats. Heck, they had one shootout earlier in the season that went like 9 or 10 rounds because these guys weren't ready to get off the ice. Puck is life.

But then we get to last night. Now last week I wrote a blog titled "Claude Giroux & Sons Are Playing Some Big Time Fuck You Hockey Right Now". That was after the Flyers' 5-3 win over Carolina, who at the time was the only team the Flyers had beaten in regulation during the month of November. But the point was that even though the Flyers had only won 1 out of their last 6 games, the team was trending in the right direction. They've been playing some decent hockey, but they just always go through about 10-15 minutes where they look like the dumbest team on the planet. But "Fuck You" Hockey is "Fuck You" Hockey. And if you just keep that attitude going, you become a team that can actually close out tight games in the 3rd. You'd be lying to yourself if you said there wasn't at least a piece of you last night that thought the Flyers were on the road to another shootout loss after they took a 2-1 lead in the 3rd period off of this absolute piss missile from Jake Voracek.

But not when the Flyers are playing "Fuck You" Hockey. Not when they have that swagger back. I mean this was Justin Braun, of all people, hitting Voracek with a feed from behind the net and then Voracek snipes the tits off of Demko to take the lead in the 3rd period. That's a sentence that I never imagined I would write this season. Everything was going the Flyers' way which would typically mean it would have been a perfect time for a total meltdown and to let Vancouver tie it up in the final minute of regulation. But what happened next? Not a damn thing. I mean Vancouver had a small chance at the end there to tie it up but the Flyers were able to hold on and get out of there in 60 minutes with 2 points. Love it.

Sean Couturier Is The Most Important Man In Philadelphia

Here's the issue. I think that maybe the Flyers are getting a little greedy with Sean Couturier. I think they need to share him around the Sports Complex a little. Have him play wide receiver for the Birds so he can fix Carson Wentz. Have him out there maybe at the 3 for the Sixers so he can make sure that Joel Embiid never has another 0 point performance again. Because the fact of the matter is that out of every athlete in Philadelphia, Sean Couturier is the only one proving right now that he can elevate the play of his teammates around him.

It doesn't matter who you put on his wings, the Sean Couturier line is always going to be the Flyers' best line. This line was electric when it was Lindblom - Couturier - Konecny. Maybe one of the most productive lines in all of hockey. But then the Flyers have a bunch of smacked asses on this team that needed a jolt. Primarily Jake Voracek, who has looked irrelevant at times this year. So what happens when you stick him on a line with Sean Couturier? He picks up a goal on Saturday, then has the game winning goal and an assist last night.

I guess it's pretty easy for guys like Jake to get that swagger back when they're playing with the best 2-way center in the NHL.

- I thought it was another strong night for the Giroux/Frost/Konecny line. They drew some penalties, generated some chances, and dominated most of their shifts. Right now I think the Flyers are totally set with their top 6. But just something to keep in mind--Morgan Frost is still so young and he's going to make mistakes out there. Like the one zone entry last night where he decided to go 1v3 and immediately ended up turning over the puck. But you have to let him make those mistakes and you have to love the fact that his confidence is growing so much that he feels comfortable leading the rush at all. If Frost is able to stay up with the Flyers long-term, I think we're only another few weeks away before he really starts to get it.

- I love Ivan Provorov to death and I'm convinced that he's a legitimate #1 defenseman in this league. With that being said, his stick is way too long for him and he has zero handle/touch on the puck at all. It's been killing this team, particularly on the powerplay, because he'll just fumble the puck as it gets kicked up to him at the blue line and then the powerplay needs to regroup in the neutral zone. I just wish I could pay the Flyers equipment manager to take a saw to his sticks and knock them down an inch or so. Maybe cut his sticks a quarter of an inch per day just so that he doesn't recognize it right away.

- It wasn't the busiest night in the world for Carter Hart but he made the saves when he had to, especially at the end there when Vancouver pulled their goalie. 16 saves on 17 shots, and only one of those shots was from Boeser/Pettersson.

- Tough break for Shayne Gostisbehere after the Flyers have now had yet another strong game with Ghost in the press box. Which means that I don't necessarily think that AV will be rushing to change the lineup anytime soon. Which sucks because even though I've lost plenty of faith and optimism in Ghost over the last couple of seasons, I still don't want to see the guy struggling. Obviously I'd prefer to see him out there every night and crushing it, but that's just not the case. I guess that's life in the NHL sometimes.

- Flyers vs Blue Jackets tomorrow night while you're pregaming for Thanksgiving Eve. Detroit on Black Friday. Habs on Saturday afternoon. Should be a nice little week here.