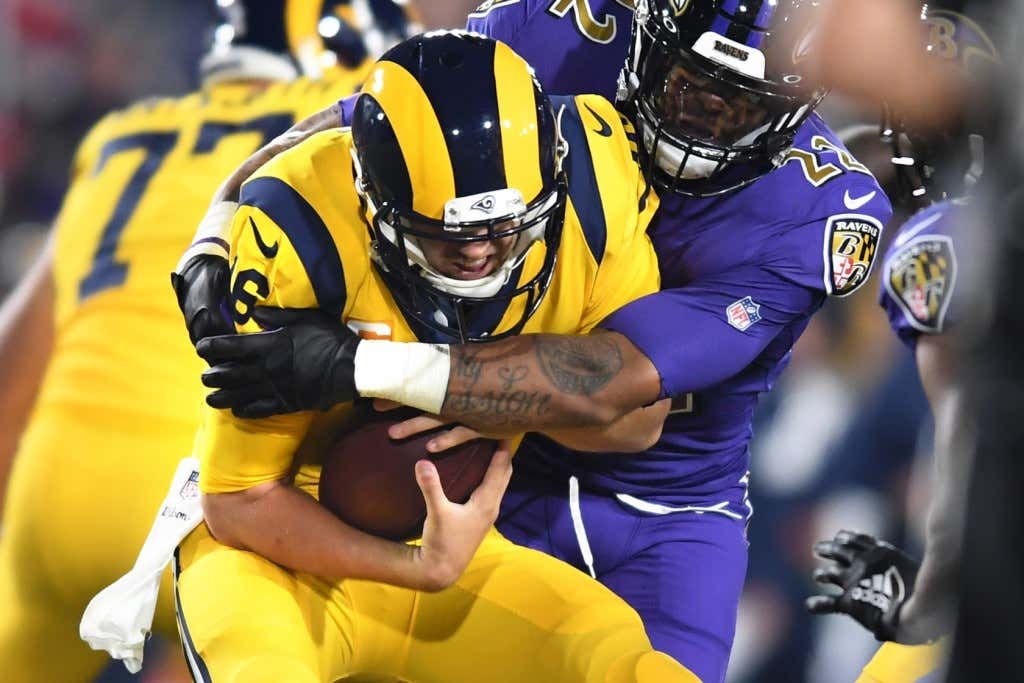 What more needs to be said? I mean, it wouldn’t be much of a blog if I just ended it here. But the title is a fair synopsis. The Ravens completely kicked the Rams teeth in from the very get go. That was as one-sided a football game as I can ever remember the Ravens playing, and we’ve watched them demolish the Dolphins, Bengals, and Texans by 5+ scores this season. I’m just not sure if any of those games were a complete pantsing in the way last night was. I mean, that was such a public display of asskicking. A PDA if you will.

There are so many heroes to tip your cap to. I’m going to do my best to acknowledge each and every one of them without this blog getting away from me. Here goes:

– What more needs to be said about Lamar Jackson? If you don’t think he’s the MVP at this point then you’ve got shit for brains. 15/20 for FIVE TOUCHDOWNS. 169 passing yards and 95 rushing yards on only 8 carries. It was another game where he had as many touchdowns as incompletions. That’s the THIRD time he’s done that this year. And this one wasn’t against the Dolphins or the Bengals. The Rams are supposed to be one of the league’s best defenses. They have the reigning DPOY and traded for who was supposed to be the league’s best cornerback. And Lamar absolutely picked them apart. This was the drive chart before he called it a night early in the 4th quarter. 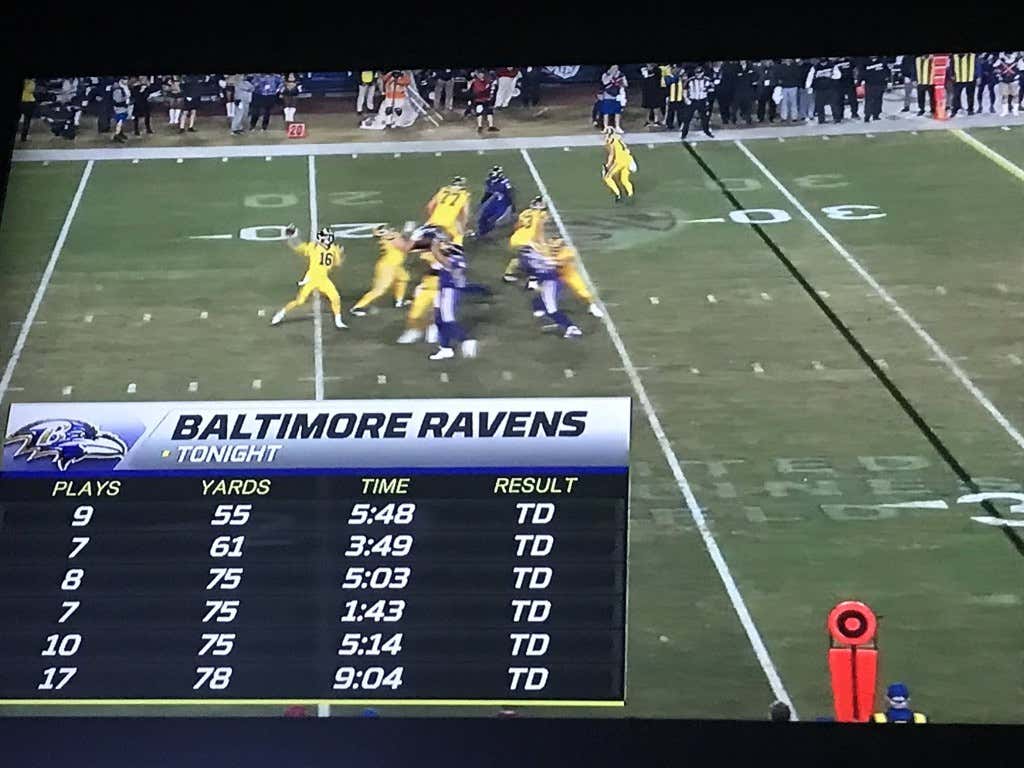 Like that’s just silly. That’s 31 minutes of marching it right down the opponent’s throats. Week after week after week he continues to surprise me and I couldn’t be happier that he’s my quarterback. I’m having the time of my life. Kid can absolutely spin it and can clown your ass while he does it

And the footspeed he shows on a play like this is just silly.

– Mark Ingram and Gus Edwards are the perfect complements to Lamar in this offense. They go north-south between the tackles and make life hell for today’s undersized linebackers who try to fill the A and B gaps. The way defenses have to pick their poison between getting bullied inside by these two or get dusted outside by Lamar is so unfair.

This game clearly meant a little extra to Ingram. Remember, he was on the wrong side of that Rams-Saints controversy in the NFC Championship Game last year. He had a Super Bowl trip taken away from him, so he was a man on a mission last night. 111 yards on 15 carries and 2 TD’s (one through the air). Would hate to get in front of this man

Just look at Jalen Ramsey on those runs. He clearly didn’t want that smoke.

Oh, and he will fight you if you don’t think Lamar is MVP.

– Marquise Brown seems to have a knack for the big stage huh? Caught touchdowns on the first two drives and made a couple more big drive-extending catches too. From the minute he’s stepped into the NFL he’s made an impact. He’s not filling up the stat sheet in terms of receptions but it feels like every time he touches the ball, it’s in a big spot. He’s now gotten himself into a tie for 7th (along with Mark Andrews) in the NFL in TD passes with 6, and he missed a handful of games early in the season too. I think we finally got a good one in a 1st round receiver.

– Shoutout to the offensive line, but particularly Patrick Mekari. Center Matt Skura went down with an injury on the opening drive of the game and Mekari had to come into the game and answer to Aaron Donald. AD is the biggest specimen in the history of interior lineman. And this undrafted rookie came into the game and the O-line didn’t miss a beat. They clearly had a fantastic gameplan to stop him but it easily could’ve gone out the window the second you add an UDFA into the mix. Everyone deserves credit for a job well done there but it’s always good to know you’ve got interior beef in reserve.

– This offense is such a well oiled machine built for a running QB. Which is why I’m about to say something that some will think is stupid and some will misconstrue. So let me say this carefully because it’s a thought I’ve had in the back of my brain for a while now. IF Lamar were to get hurt… I still think this offense can be effective with RGIII. Obviously the O would lose a ton of steam. RGIII is clearly not Lamar. The run-game would suffer and Bob has had his fair shake proving his worth as a pocket passer in this league and it’s a mixed bag. He can’t sling it as well as Lamar, clearly.

But this Greg Roman offense is EXACTLY the type of offense that RGIII should have always been running and would’ve given him the best chance to succeed. The Redskins were willing to run a lot of these types of plays in that rookie season of his and they had a ton of success. Then he got banged up by Haloti Ngata and that brutal turf they grow down in Landover and they decided to try to fit the round peg that was his skillset into a square hole. They tried to turn him into a prototypical pocket passer and it all spiraled from there. RGIII has shown an ability to move the football in the past two preseasons and in mop-up duty this year. We can get by with him with the way this defense is playing. I promise you.

– As always, kudos to all the selfless skill position players that show a willingness to block in this offense. The receivers really do a tremendous job blocking down field and letting these guys run free. Shoutout to the likes of Nick Boyle, Hayden Hurst, and Patrick Ricard too. What those guys do clearing gaps as lead blockers is so crucial to how this offense operates. It may be a cliche but this really has been a team effort.

– The defense absolutely set the tone with a quick 3 and out, which is what they’ve been doing all season. That brings the defense’s opening drives this season to the following results: Interception, Punt, Punt, Punt, Punt, Punt, Punt, Punt, Punt, Fumble, Punt. That’s so ridiculous. They set the tone early and get the ball into Lamar’s hands ASAP. Once that happens, it’s already too late. From there the Rams were forced to play from behind the entire game and their play selection shows it. 38 dropbacks vs 8 runs. It’s obviously much easier to stop a team when you know what they’re trying to do. The Ravens literally waltzed into LA and did whatever they wanted.

– Matt Judon continues to play out of his mind. He really is one of the game’s premier passrushers and we really need to make sure we give him a fat payday after this season. He had another strip sack last night that the Rams were lucky to recover. He was constantly in the backfield. We knew that if we could get some heat on Goff that he would make mistakes and that’s exactly what he did. And clearly he enjoyed himself a bit too.

– Brandon Williams has been such a difference maker yet again this season. Those few times the Rams tried to run, there was basically nothing there. You may not notice it unless you’re looking for it but the guy just gobbles up blockers. He lets the edge rushers engage in 1-on-1 matchups. Just look at Judon’s sack. They had a tight end blocking him. Clearly that’s stupid on their part but that might not be a mistake they make if they’re not catching hell inside from B-Will every snap.

– I said before yesterday’s game that this side of the ball was going to be all about winning in man coverage in the secondary. They did their job early in the game and then some. They contained their receivers to short gains and got off the field 3-and-out on the first two drives. From there it just became situational football and made them earn every yard (see 15 play, 61 yard FG drive allowed in the 2nd quarter). They mixed in a lot of zone coverages and continued to send guys after the QB and forced Goff into two costly INT’s. Truly a team effort where every guy did their job.

– Story of the night on defense was Marcus Peters. That guy was on an absolute MISSION. Yes, the INT was a sick play and I’ll watch it over and over again

But I’m also equally impressed with how physical he’s been. He actually lead the Ravens defense last night with 8 tackles. He’s unafraid to get his nose in there and play Ravens football. And he’s not afraid to let you know about it either. Trading for him was an absolute fleecing and I can’t believe we got this guy for a 5th rounder and Kenny Young.

And I can’t believe they gave up two first rounders for that clown Jalen Ramsey.

Seriously, who is he even jawing at at that point. And why? Dude just got his taint handed to him. Very sad stuff to see.

Lastly, I have one last shoutout to give. That’s to the one they call the football analyst, Daniel Stern.

The Athletic ran a piece last week that detailed what Stern’s role is on gameday, in addition to how they gameplan potential situations all week. In the interest of keeping this short, the cliffnotes version is that the Ravens have a 25-year old Yale graduate in Harbaugh’s and Greg Roman’s ear feeding them win probabilities all game based on situations. When Harbaugh talks analytics at the podium, he’s basically a mouthpiece for Stern. And what I may love the most is Harbaugh’s willingness to take the time to learn and understand where these advantages can be gained and apply them on gameday.

We all saw the viral event that was that 4th and 2 in Seattle. That play was basically the turning point of our season and kickstarted this run we’re on. But what we didn’t know was that Harbaugh’s mind had basically already been made up to go for it because Stern told him it was clearly the right analytical play. Harbaugh was just looking to make sure that Lamar’s head was in the right place and that he was as adamant about going for it as the coaching staff was.

This was on full display again last night as the Ravens chose to go for it on 4th and a long 1 when up 7-0 at the Rams 23. I do think most competent coaches go for that regardless of using analytics, but the Ravens pulled it once again when a 4th and 9 at the Rams’ 38 became a 4th and 4 at the 33 after a too many men flag. It wasn’t an important situation given that they were already up 35-6, but they initially had the FG unit out there and then put the offense back on the field and converted it. I love that they’re committed to the analytics regardless of the score. If you start to pick and choose when to apply them, you start to defeat the purpose. It’s a small thing, but it says a lot about the mentality they’re going in with.

Regardless, imagine being a 25 year old with a voice in John Harbaugh’s ear every Sunday. Stern was still in high school when Harbs won a Super Bowl 7 years ago. That’s crazytown. As a numbers guy myself, that’s a dream job for me.

San Francisco should be a ton of fun. Ridiculous that it’s a 1 pm game, but is what it is. They gotta come into our barn and face the NFL’s best team. Time to make another statement.