First of all, shout to the Stoolies who know my wheelhouse & alert me to these key topics. Second, it's a safe bet the University of Toronto & York University are on HIGH alert right now...

Police have released a photo of a suspect after people at two Toronto universities had feces thrown on them last week.

Investigators are looking into whether the two cases are connected. Police haven't yet said if students were the intended targets of the attacks, although York University confirmed that the victim on its campus is a student.

The first incident happened last Friday, when fecal matter was thrown onto someone at the University of Toronto in the Robarts Library cafeteria.

Jason Huang, a fourth-year life science student, told CBC News that he was sitting in the cafeteria when he saw a tall man wearing a yellow construction hat run up to someone and dump a bucketful of brownish-yellow liquid on them.

"We didn't know what it was then ... and then the smell just hits," Huang said.

The man in the construction hat was laughing and ran off, he said.

I feel like the term "nightmare fuel" gets thrown around too loosely sometimes, but getting human shit tossed on you while the perp lets out an evil giggle is 110% nightmare fuel with a NAS button attached to it.

The second incident happened two days later on Nov. 24, when a person at York University also had feces thrown on them while they were in the Scott Library.

A York University spokesperson said the incident happened around 5 p.m. ET and that campus security was dispatched to deal with the situation.

Two videos captured after that incident and shared online show some of the fecal matter left behind on an empty chair and a number of shocked students packing up their stuff to leave the area.

WARNING: BROWN DOO-DOO WATER ALL OVER IN PHOTO BELOW SO IF YOU'RE EATING DINNER WHILE SCROLLING MAYBE STOP. 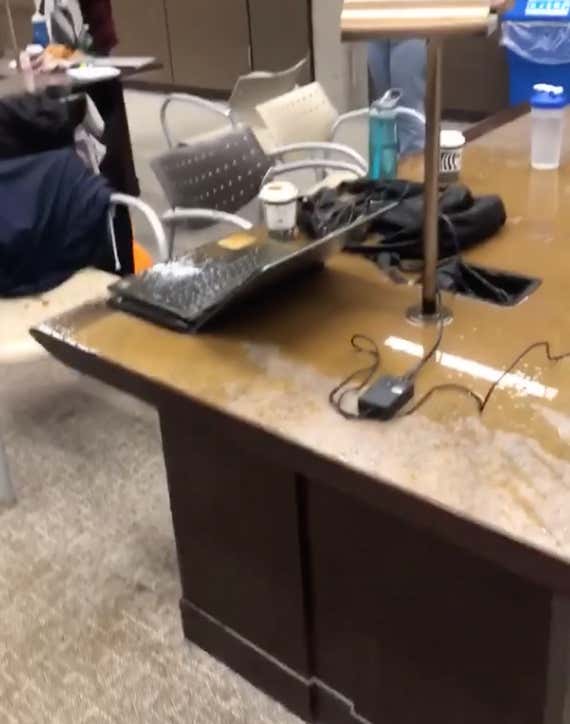 Where do you even begin when something like this happens to you? I think I would run to the nearest car wash & stand right in the middle on high power, then douse myself in rubbing alcohol, then shower 10,000x in a row, then repeat the process. Therapy would definitely be in there somewhere as well.

And not to sound paranoid but this crime a growing epidemic? Did the Canadian man get the idea to do such a thing after seeing the news from Los Angeles earlier in the month?