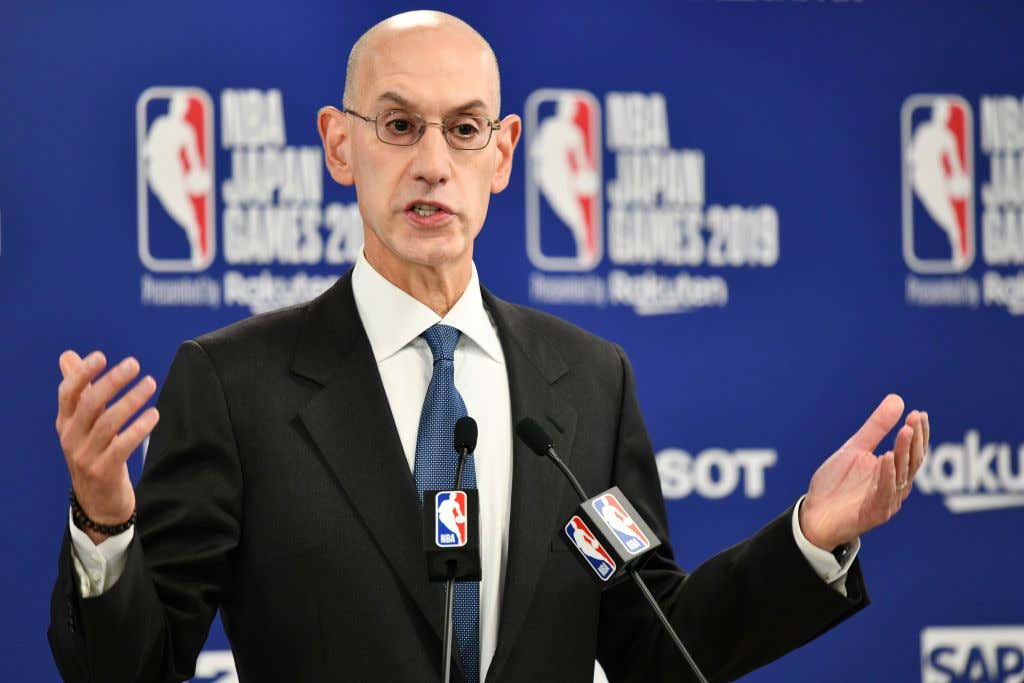 OK so there's a lot to digest here. The idea of the NBA changing up their schedule and trying to incorporate some form of in season tournament aren't exactly new concepts. That stuff has been talked about for years and it always seemed like one of those things you debate on the internet but never actually see come to fruition. So while this isn't new, this is the most real these massive changes have ever been. From reading Woj's story it seems like there isn't all that much pushback either which means as a fan of the NBA you should maybe start getting used to this being the future of the league we all love. Personally, I think the NBA season is perfect just the way it is, load management and all. If teams want to tank in hopes of landing a franchise cornerstone player, I say best of luck. Guys want to talk and maybe one day join forces? Welcome to life. But Adam Silver, see he has to think about money. He has to make sure the NBA is an evolving league that can adjust with the times and find new ways to expand, all that bullshit. Whenever you hear about these sort of drastic changes, you have to go back to the bottom line. The NBA is in the business of making money last time I checked, and you bet your ass this would make them a boat load of it.

But what we're talking about is creating an entire new era of NBA history. It's already hard enough to compare previous generations and great players from different eras. I don't care so much about going from 82 games to 78 or 79, I don't care about an in season tournament all that much. If those games are going to be played anyways call it whatever you want. If we're talking about changing the league, for me it all comes down to the postseason changes.

First, the play in tournament. A very cool idea, in theory. This whole thing implies that a team that's a 9 or 10 seed is going to want to make the playoffs. Sadly, if you are bad enough to where you are a 9 or 10 seed, making the playoffs doesn't really do you any good. You're better off taking your chances in the lottery. For example, let's say right now the 10th seed Hornets somehow win that play in tournament and have to face the 1st place Bucks. How long does that series last, 4 games? Mercy rule after 2? A rebuilding team like CHA, wouldn't you argue the higher draft pick is more important to where they are in their process than a first round sweep? So you could have a situation where the 9th and 10th seed teams end up resting their best players to help ensure they make the lottery. That would be a bad look for a league that already hates the idea of tanking. Then you factor in how the 7th or 8th seed may want a certain position due to how the playoffs are seeded.

The big thing for me though is the playoff reseeding.

The reseeding of teams in the semifinal round based on regular-season record could give the NBA a championship series that includes its best two teams. The WNBA has been seeding teams in the playoffs without regard to conference for several seasons.

I get the idea, they want the best teams to be playing for the title regardless of conference. This all of the sudden makes the regular season a little more important if your plan is to make a deep run. Let's look at this in context of what we saw last season with both conferences

So this would have been great for MIL and who knows maybe would have won them the title if this was a thing this season. We still get the TOR/MIL matchup and you either get a GS/MIL Finals or a matchup of the two best teams all year records wise. Pretty interesting. If regular season records are going to matter, teams in the West get the short end of the stick given how hard their conference is. Imagine getting a worse seed because you had 1 fewer loss than a team in the East, even though everyone knows you're the better team. It'd be like if the 3 seed in the East ends up having more wins than the 4 seed in the West which might be the Clippers (as it stands now). Everyone knows the Clippers are better, but they could get boned in their reseeding just for playing in a tougher conference. That's rough.

Either way, the future of the NBA is on the verge of changing forever. To hear that this could all be a thing by the 2021-22 season is pretty crazy because that's right around the corner. Part of me feels like this is doing a little too much, but everyone hates change at first but this would eventually become the new normal and nobody will even remember when these changes didn't exist.