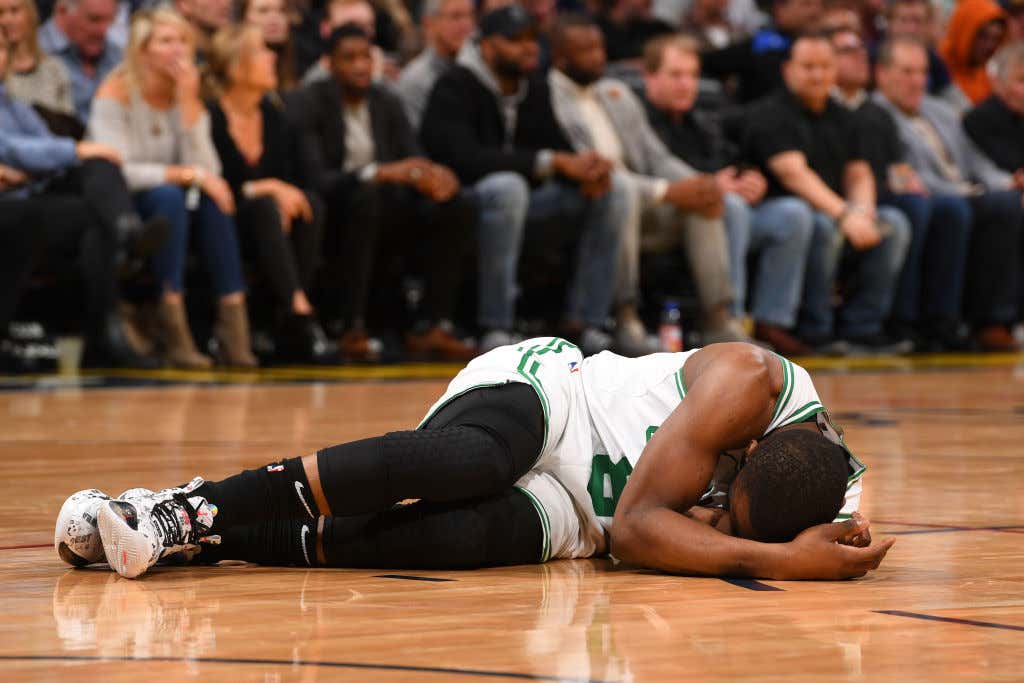 Before the Celtics left for this 5 game West Coast trip, deep down you knew it was going to be filled with weird moments and that it would be an opportunity for us to really get a sense of what type of team this may end up being. While they got off to that incredible start, it's only November and we hadn't seen what this team would do against some better competition on the road or when adversity really set in. Would they cave and fold like last year's team when they went on their first West Coast trip or would they show that things are different, that they are mentally tough and will actually put up a fight.

Of course, it was way worse than any of us could have imagined. Dick punch after dick punch that even if you thought you were prepared to experience still cut you to the core. How else can you describe three losses by a total of 8 points? The 2-3 record kinda stinks but just as easily could have been 5-0 which is some decent spinzone but also pretty fucking frustrating. I can't remember a trip with so many moral victories and the thing about moral victories is they are cool and all but definitely not as sweet as real, actual wins. That's why you play right? So on one hand I am happy with what I saw for the most part with this team. After losing Kemba like they did this team could have mailed it in, but they kept fighting against one of the best teams in the NBA and nearly pulled off the comeback. But at the same time I'm pretty frustrated with how this team starts and closes games. We learned that on any given night this team can hang with anyone no matter who is available, but we also learned they have some pretty glaring flaws that are going to need to be addressed in order for this team to get to where we want it to be.

I think it's fair to say this trip was not "successful" in terms of their record, but was successful when it comes to seeing what this team is made of. I feel a whole lot better about the compete level of this team and that's something that should serve them well throughout the rest of the year. With that said, let's talk through this latest dick punch, because man was it brutal.

- There is only one place we can start

We got some initial good reports about Kemba after the game last night and it sounds like there was more good news today. Given how bad this could have been, this is awesome to hear. Who knows how long Kemba will be back, but none of that really matters. This could have been a life altering injury and it was scary as shit to see live. To know that Kemba is going to be OK is a relief that has nothing to do with basketball. I think it's safe to officially exhale.

- If you wanted to talk about the actual game, it's hard to not be pleased with what we saw from Jaylen Brown. He had a horrific start much like the rest of this team, but when adversity hit and this team needed someone to step up, Jaylen continues to rise to the challenge. That's important

Jaylen's second half was pretty ridiculous to the tune of 16/7 on 5-6 shooting including 10 huge points in the fourth quarter with gigantic three after gigantic three. In fact both he and Tatum stepped up in a big way over those final 24 minutes. Tatum was right there with him with 12 second half points on 5-8 shooting. With Hayward out for another month and Kemba probably going to miss some time, the play of our beloved wings becomes that much more important.

Both were pretty solid on this trip

and their roles become even larger for the foreseeable future. The efficiency isn't great and that'll be important with fewer weapons available, but this trip told me what we saw early from Jaylen and Tatum is real.

- The resiliency the Celtics showed in this game could not have been more refreshing. This was a game the Celtics never led in at any point and only tied once. They got down by as much as 19 and have every reason to quit. Instead they woke up defensively, started attacking the rim on the other end and showed a level of fight that had Brad talking in a way we in no shape or form came close to hearing last year

Warriors. Fucking warriors. Couldn't have said it better myself.

- It sounds crazy to say, let me fully admit that, but where the hell would this team be without Brad Wanamaker?

This dude has been nothing but consistent and is filling his role better than any reserve guard we've seen over the last few years. The thing with Wanamaker is this is turning into a consistent thing, just look at his month of November

No wonder Brad trusts him so much. This is a dude that has earned his minutes and suddenly is one of the players on this team I trust most. Look at that efficiency, I don't ever remember Brad Wanamaker playing at this level and if this is just who he is now I cannot stress how valuable of a piece that is for the second unit that DESPERATELY needs someone to step up and be consistent.

- Even with the Nuggets in points in the paint, 3PM, second chance points, had fewer TOs and owned fast break points 20-7. These are things that usually don't end in losses but are good to see happen against a quality team like DEN.

- Let's give the man credit when it's warranted. I thought Kanter's defense was more than solid, he finished with a respectable 92 Drtg, and paired with Theis who was just as solid with an 88 rating the Celts interior defense continues to not be the disaster many predicted it would be. Timelord gives you the athletic blocks but he certainly had his issues but on the whole this weakness hasn't killed the Celts like we thought.

- The Celts did a really goo job keeping their hands low, disrupting multiple pocket passes in the P&R. It felt like they had at least 6 or 7 steals that came off Jokic passes in P&R which isn't exactly easy. To get them in crunch time like they did in this game was great to see and is probably some good scouting.

- The Celtics finished this trip with the 30th best offense during these 5 games. That's bad. Pretty insane they were able to be in every one of these games despite having the worst offense in the league so I don't know whether to be concerned or proud. This is a very confusing time if you can't tell. They survived for the most part because they also had the NBA's best defense over these last 5 games so that's great, but last time I checked you have to put the ball in the basket to win. Finishing with the 29th TS% certainly makes that difficult.

- I continue to be very confused at how Grant and Carsen cannot make anything. I know they are rookies but we're getting to the point where this is flat out ridiculous. Grant is now 0-19 from three, Carsen is just 11-35, if they are going to get minutes they have to find a way to contribute offensively for the second unit. Especially now with more guys out. I'll include Semi and his 1-5 last night in this as well. Someone is going to have to figure their shit out because bench scoring is now a need.

- I don't know what it is with this team and freak injuries to all star free agents in their first year in Boston, but I have had enough. It'd be nice if the Injury Gods picked on someone else and left us the fuck alone.

- Don't think I didn't notice on that big time bone job with the Paul Millsap continuation And1 that was very clearly on the floor before the shot. Loved how it came with 3 minutes in the fourth in a 1 point game so it won't be included in the L2M report. No big deal just back to back bone jobs late in the fourth quarter of a close game. Must be nice to get some home cooking, something the Celts never seem to get even when they are in the Garden.

- Brutal turnovers by both Grant and Wanamaker late in this game. Grant's coming out of an ATO was rough, and the one with Wanamaker coming in the last 1:46 in a 3 point game is not exactly ideal. The Celtics and closing games continues to be a big time issue. Self inflicted wounds never work out.

- It's pretty frustrating that the Celts outplayed the Nuggets for 75% of this game, and had they just had a normally terrible first quarter instead of scoring just 13 points, they most likely win this game. I'm ready to declare the Celtics first quarters officially a problem. How many times this trip did we see them get down 8-15 in a blink of an eye because they can't buy a fucking basket? Back to back games starting 1-10 wasn't even something I knew NBA teams did.

The first quarter numbers with this team aren't pretty. First, here's how they did this trip during the first 12 minutes

30th in points per game

It's literally impossible to be more pathetic offensive to start games than what the Celtics were on this trip. Then you look at where they rank in first quarters for the season

29th in points per game

So yeah, it's not just a 5 game problem. This is a season long problem and guess what is really hard to do? Come back from double digit deficits time and time again. You can't keep shooting yourself in the foot like this and expect to be a good team. This team learns how to not be completely pathetic to start games, watch out.

- Imagine being this person? What a fucking loser

Thankfully, this disaster of a trip is over. Hate West Coast trips with the fire of a thousand suns. Last year if you remember it was the start of their unravelling and this year it took Kemba and listen 3 losses in 4 games is 3 losses in 4 games. Scoreboard matters. It could have been way worse, they could have showed there is a giant gap between them and some of the other really good teams in the league and that didn't happen. But at the end of the day it comes down to execution and winning and those were areas where the Celts came up short.

It feels good to know there is no quit in this group though. Now just get home, get rested, and take care of business within your own conference.