Don't take any of what I'm about to say as any indication that I care about the actual results of the voting for the Pro Bowl. Or of any All Star team in any sport. Or of any individual awards. Or of any vote of any kind. Outside of "Survivor" tribal councils, I haven't been invested in the outcome of any kind of popular election since the country voted in the blue M&M. I've got real things to worry about. I've got a life and a thigh-to-ankle cast on my surgically repaired knee and people coming over for Thanksgiving and I haven't driven a car in a month and I'm about a week away from going full Jimmy Stewart-in-"Rear Window" level stir crazy and don't at all intend to burn precious calories on a popularity contest.

So are we clear on that? Not only am what I'm about to say meant to me mistaken for me actually giving more than zero fucks. On the contrary; I see this as a pure good.

Here is where the Pro Bowl voting stands for AFC and NFC defensive players as of today: 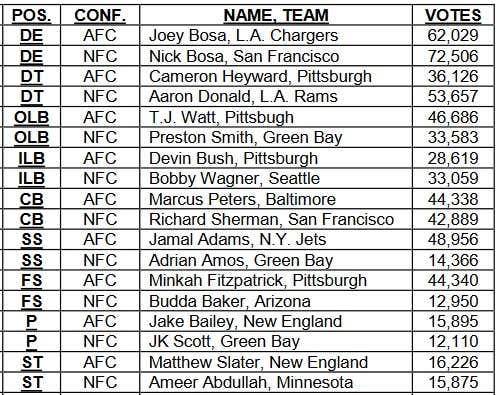 The Patriots have two names on here, a core-4 Special Teams guy and a punter. Just in case you're asking, they have no one on offense either, though that's someone understandable. The larger point is that there is not one member of the defense that not only leads the NFL in the following categories:

... and is very near the top in Sacks, QB Hits, Forced Fumbles and basically any other category you can think of that comes under the duties and responsibilities of a tackle football defense.

And they're 9-1 as a team. And not one player on said defense is leading at his position. The Boogeymen aren't getting a sniff. You say the Steelers are at 5-5, have given up 202 points to New England's 108? That's no reason for them not to be leading in three of the eight spots.

Take for instance, Jamie Collins. No other player in the league has posted the kind of across the board, versatile production he has:

And yet he's losing out at OLB to TJ Watt, a hell of a player, with 10.5 Sacks and a preposterous 24 QB Hits. As an edge rusher specialist.

Devin McCourty? He and Minkah Fitzpatrick lead the league with 5 INTs. And the rest of their numbers are damned near identical. The only difference is that McCourty is not only the captain but the axel around which the rotating blades of a historically great defense spin to cut down opponents. Fitzpatrick is on a team that just got their dicks kicked in the dirt by the Browns. And he started the year on a team whose motto was "Refuse to Not Lose" and lost 43-0 to McCourty's team.

But I'd argue it's cornerback where the true hosing is taking place. Stephon Gilmore has taken 359 coverage snaps, almost exclusively in solo coverage on the opposing Alpha receiver. He's still only been targeted 61 times. With good reason. Because he has 3 INTs and his Passer Rating against is just 43.5. Which is 0.2 behind Richard Sherman for best in the NFL among cornerbacks who qualify. And if you want to get technical, the lowest passer rating in the game among all corners with 200 or more coverage snaps is JC Jackson. An impossible 18.9.

But again, that's alright. The public is speaking. And they're saying the Patriots defensive players are not that good. At least they're not the best. Only the defense as a whole is. And that is better than alright.

I love this because it's a return to the heady days of the early 2000s. When they were winning Super Bowls supposedly with smoke and mirrors and lucky bounces and officials calls going their way. Years like 2001. When not a single player was named to the team and the only guys who ended up making it: Ty Law, Lawyer Milloy, Troy Brown and Brady were named as subs. And that season worked out well IIRC.

So hopefully this will continue. Because while it doesn't matter to me, I know it matters at least a little bit to the guys who are playing their asses off but not getting credit outside their own locker room. Keep voting for those Steelers, America. You're doing us all a favor.