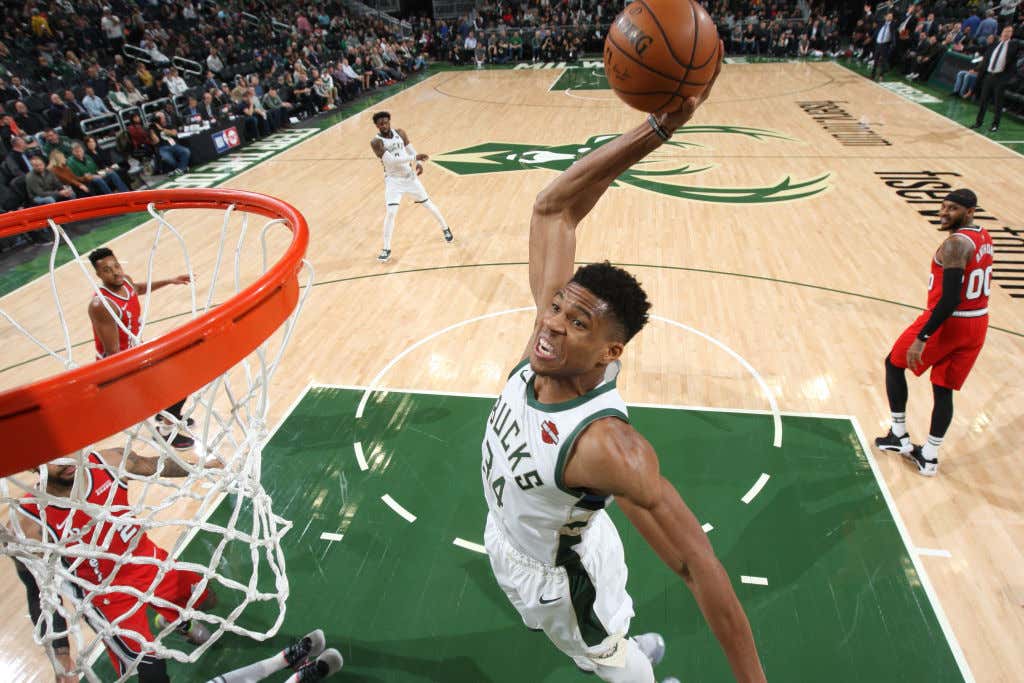 Good morning everybody happy Friday and welcome back to another edition of Last Night In The NBA where we bring you up to speed on everything that went down from the night before in the Association. Unfortunately for any stoolie stuck in the cubes this morning the NBA sort of boned you and only gave us two games last night, although if you love offense it was your kind of night. Neither game had a team under 121 points, and in the event you were watching TNF or something and missed the action, here's what happened.

No, this game did not go into overtime. Instead, we just had two teams that had zero interest in playing defense. With POR you sort of expect that, their defense is 22nd in  the league. But MIL? That's a top 10 defense that you don't exactly see give up that many points at home, especially when the opposing team is without its best player. With no Dame in the lineup it was already going to be an uphill battle, and even with CJ doing his thing and dropping 37/10

it still wasn't enough. The frustrating part was after the first quarter they actually played MIL even, but their slow start, especially defensively, dug an early 10 point hole and the rest was history. You aren't going to see MIL blow too many double digit leads at home, they were 45-5 last year in 10 point games and are off to a 6-1 start this year in them. I don't want to overreact here, but at 5-11 the Blazers are currently the 2nd worst team in the West right now and are already 3 full games behind the 8 seed. Is their season over before we even get to Thanksgiving? They need massive win streak to at least get close to .500 and they need it immediately.

On the bright side, at least they may have something in Skal Labissiere

But seriously though, this season has been a disaster for them

For MIL, you're looking at the hottest team in the East, the current best team in the East record wise who also happens to own the best point differential. They've now won 6 in a row and 10 of their last 11 and just like you thought heading into the season the Bucks are every bit the wagon they showed to be last season

it goes to show just how good their depth is considering they are doing this all without Khris Middleton who is a pretty important piece to their puzzle, but with guys like Bledsoe stepping up and then some timely threes from Wesley Matthews they are getting legit contribution from just about everyone

every time it seemed like the Blazers were making a late push, cutting it to 5 and things like that, the Bucks always had an answer. To score like this on a night where Giannis went 9-27 is pretty huge, and my guess is we won't see MIL drop out of the top 2 in the conference for the rest of the season.

Is it crazy to say that if NO gets everyone back relatively soon that this team can fuck with the 8 seed? As of today they are just 1.5 back of PHX who they just beat and has lost their last 3. They are competing with teams like SAC/MEM/OKC right now in that next tier, and I dunno what prevents a healthy Pelicans team from being the one that emerges? With guys back in the lineup this is what they can do

Those three did most of the damage combining for 77 of the 124 they scored. The Pelicans put up 53/45% with 16 3PM and getting someone like Lonzo Ball back clearly made a difference. Jaxson Hayes continues to fill in nicely while Favors and Okafor recover from their injuries and remember, this team gets to add Zion at some point. We're getting close to that 6 week mark and he should be back before you know it. Think of what that is going to do for this team considering every time we've seen Zion play he fucking dominates. If this team is going to get a legit leap year from Ingram, the rookies continue to show promise and they execute late in games like they did last night, this Pelicans team can hang with anyone.

Things may not have looked good to start and Redick's playoff streak may have been in jeopardy, but I dunno I think they can squeak in.

For PHX, another game without Baynes so I don't know how you could expect them to win. But they are crashing down to earth a little bit. This team was successful early because of the work they did on the defensive end and it's no surprise that in their last two losses they've given up 120 and 124 points. That's simply too many when facing these teams in the West and why it's going to be hard for them to survive with key rotation players out. They had their fair share of solid offensive performances

and the second unit played well with three players in double figures and a combined 6 3PM, but again if you aren't going to defend in this league you're pretty much cooked. I don't want to take all the wind out of PHX's sails but they now have MIN/DEN/WSH/DAL up next and even if you want to say WSH is bad, they have a top 2 offense in the entire NBA and what have you seen defensively from PHX to suggest they too won't drop 120.

The Suns were the biggest surprise of the first 5 weeks, but now they have the challenge of living up to how good the internet and talking heads have said they can be this year. That's always the hardest part that we often see teams struggle with. Once you have expectations, how do you respond? So far for PHX, it hasn't been all that great.

And that's it! You are now caught up with everything that went down last night in the NBA. We're back tonight with 10 more games so pretty much a full slate if you don't feel like wasting money at the bars. As always, have a great Friday!