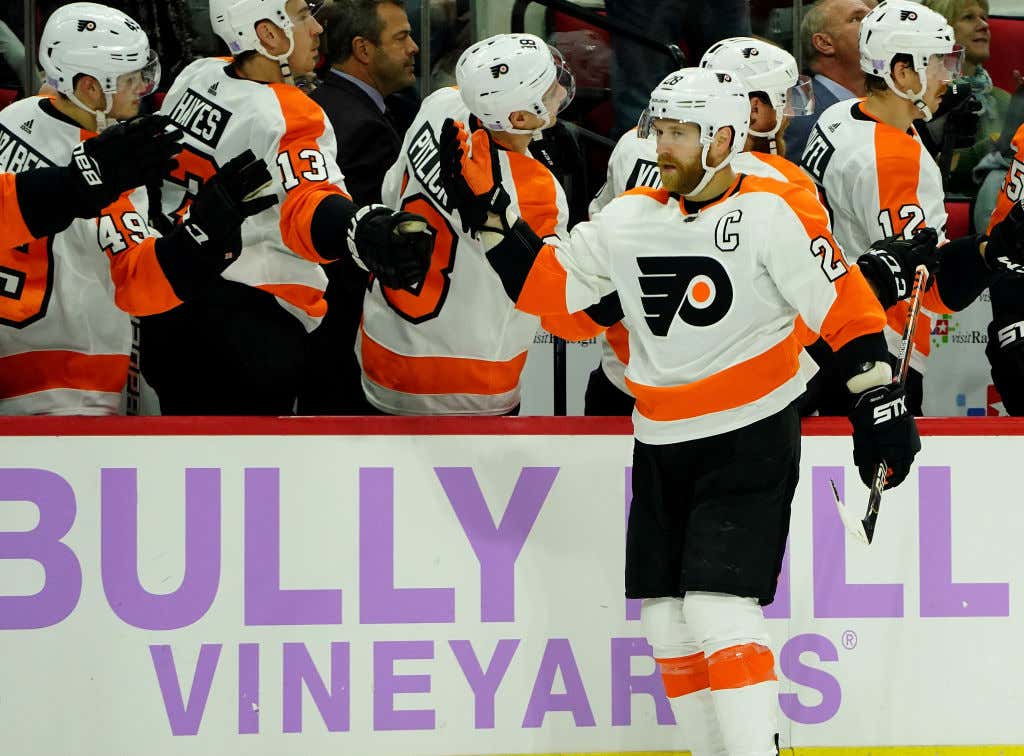 Claude Giroux tucks away 2 goals and adds 2 assists on the first 4 Flyers goals of the game, before Kevin Hayes put away the empty netter to seal the dub. A 4-point night from Captain Claude and you could tell he was playing "fuck you" hockey all night. It's the exact type of game you need to see out of a team's leader. The Flyers got off to an absolute dog shit start. It was 2-0 before most of the idiot fans in Carolina could even find their seat.  And for a team that struggles big time on the road, it was looking like last night was going to be another colonoscopy of a Flyers game. But when the team needed him the most, that's when Father Claude and his sons went to work.

In case you didn't know, Claude Giroux had a son over the summer. So not only does he have Dad Strength now, but he also has those fatherly instincts. Which made it easy for AV to stick young Morgan Frost on his wing, and Travis Konecny on the other. His linemates last night were pretty much an infant and a misbehaving toddler. So you need a dad on that line or else you're going to have an episode of Rugrats on your hand. But Claude Giroux isn't like a regular dad. He's a cool dad. He's a cool dad who will let his sons do some crazy shit like this Travis Konecny assist to Captain Claude to start the scoring for the Flyers.

Toddlers are typically pretty dirty but this was flat out filth from Travis Konecny. A no-look twister delivered straight to the back pipe and right on Claude's tape for the easy put away. Aside from maybe Sean Couturier, I'd say that Travis Konecny has been the Flyers' best forward so far this season. And you can tell he knows he's been killing it a quarter of the way through the season so far with how big of balls it takes to attempt that pass while you're down 2-0 in the 1st. That's just a total disregard for humanity pass right there. That's a "yeah I'm better than JvR's little shit stain brother and everybody else out here" move. And Claude--having the fatherly instincts that he has--knows exactly where to go to tap home that assist.

What was especially great about this goal is that these two just saved Jake Voracek's ass from getting shipped off to Siberia. Because right before this goal, the Flyers were on the powerplay. Then that jackass Voracek takes an unsportsmanlike penalty with 55 seconds left on the PP. For a guy who has been pretty abysmal so far this year, taking a penalty whilst on the powerplay and down 2-0 doesn't seem like the ideal decision to make. But G and Konency score 4v4 and everybody forgets what a jackass Voracek was. Also, the Flyers were able to get a powerplay goal later on in the period (with Claude getting the primary assist) so it all worked out in the end.

Now let's bring Morgan Frost into the blog, shall we? For all you fancy stat nerds out there, Morgan Frost is the NHL's all-time leader in goals per game.

He got his first career goal in his first career game on Tuesday when the Flyers lost to Florida. And then last night he scored his first NHL career shorthanded goal after Captain Claude did what he does in the faceoff dot, and won it cleanly to The Snowman for an absolute laser beam.

Carolina iced the puck on the powerplay, then Giroux dummies Teravainen on the faceoff, and Morgan Frost blasts one past that bozo Petr Mrazek. Typically that's something you'd expect to see happen against the Flyers, but when you have the greatest goal scorer in NHL history out there? Well the Flyers are now the storm.

So Giroux had a goal setup by Konecny. Then he setup Morgan Frost with his 2nd goal in 2 career games. Now it's time to get the whole family together. And this one right here was the most impressive out of the 3 goals this line scored together last night.

Travis Konecny dominated this forecheck. He gets to the puck right away, absolutely owns Teravainen who then takes out Edmundson, gets the puck over to Morgan Frost and then what an unbelievably patient and silky set up from The Snowman to Giroux for his 2nd tap in of the night. I mean this is a kid playing in just his 2nd career game. He has the patience, the hands and the mind to be calm with the puck right there, flip his hips so he has more options to work with, and then adds just the right touch of sauce to that pass for Giroux to slap home. It was beautiful. This line combined for 3 goals and 6 assists last night. 9 points on a 5-3 game that was really just a 4-3 game before the empty netter. What a unit.

As for the rest of the guys? Well I thought it was a great night for Sean Couturier playing in his 600th career game even though that line wasn't able to get anything on the scoreboard. It's tough to take Konecny off of his wing, but as long as you keep Lindblom and Couturier together they'll be able to go long stretches at a time where they completely dominate possession.

- It was a brutal start to the night for Brian Elliott, who let in 2 super leaky goals early, but once he was able to settle in last night he made plenty of big time saves. Especially late in the 3rd period when the Flyers desperately needed to hold on to the lead.

- The Flyers don't need Brian Elliott to be perfect. They just need him to be able to give this team a chance. That's exactly what he provided last night. Those two saves in the 3rd period more than make up for the shitty two goals to start the game.

- Good to see Ivan Provorov get on the board. For some reason he still just looks like a guy who isn't playing with a ton of confidence. It's not as apparent as guys like Gostisbehere but you can tell that Provorov just doesn't have a ton of faith in himself right now. So every goal is going to be a big time confidence boost.

- Flyers play Calgary tomorrow afternoon. Hopefully while the Flames are in town, Chuck can pull off a Voraceck+ for Gaudreau trade at some point before the 3rd period.