The Detroit Lions beat the Green Bay Packers 26-14 in their annual Thanksgiving game at Tiger Stadium. The Packers came into the game at 10-0, while the Lions were 8-2 and battling for first place in the Western Conference. With Milt Plum leading the way, Detroit jumped out to a 26-0 lead as the Lions defense smothered Green Bay sacking Bart Starr 11 times, to hand them their only loss on the season.

Of all the teams Vince Lombardi coached, the 1962 Green Bay Packers may have been the best. The Packers had their first winning season in more than a decade when Lombardi arrived in 1959. A year later, the Packers lost in the NFL Championship Game to the Philadelphia Eagles. The Packers would reach the mountain top in 1961, beating the New York Giants in the title game. Returning in 1962, the Packers win a powerful running attack, and a strong defense was nearly unbeatable, winning their first ten games.

Had it not been for the Packers, the best team in the NFL may have been the Detroit Lions. Under coach George Wilson, the Lions finished second in the Western Conference in 1960 and 1961 and held a record of 8-2 entering their annual Thanksgiving Day game at Tiger Stadium. On October 7th, the teams played in Green Bay, with the Packers winning 9-7 on a last-minute field goal by Paul Hornung. At the time, Thanksgiving in Detroit meant the Green Bay Packers were coming to town, as the Packers traveled to Detroit on Turkey Day 13 straight seasons from 1951-1963. 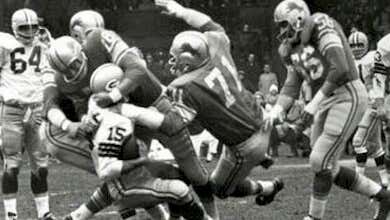 The Week 4 loss in Green Bay had been especially bitter as the game was played in a steady rain, with the Lions having a lingering resentment over the physical nature of the game. The Lions looked to make Green Bay pay and targeted quarterback Bart Starr. On the first play from scrimmage, the Lions swarmed Starr throwing him for a 15-yard loss, which fired up the crowd of 57,598 at Tiger Stadium. The Lions would sack Bart Starr 11 times, totaling 110 lost yards, setting a new NFL record. Leading the Lions sack attack was Roger Brown, who was credited with six unofficial sacks, as the stat was not officially tallied until 1982.

While the Lions defense had Bart Starr on the run, Milt Plum was taking their offense up and down the field. Plum had a pair of touchdown connections with Gail Cogdill one in the first quarter for 33 yards and the second went for 27 yards in the second quarter. The Lions defense also came up with two scores, as Sam Williams picked up a Starr fumble for a score, while Roger Brown took down the Green Bay quarterback for a safety to give Detroit a 23-0 halftime lead. In the third quarter, the Lions extended the lead to 26-0 on a 47-yard by Milt Plum.

The Packers would finally use their defense to get on the board in the fourth quarter, with Willie Davis recovering a fumble in the end zone. The Packers would get a four-yard touchdown run by Jim Taylor, but the game was decided by then, with the Lions winning 26-14.

The loss would only one suffered by the Packers, as they finished the season 13-1, while the Lions finished 11-3. The Packers would go on to win a second straight NFL Championship, as the Lions won the NFL consolation game for the second straight season.