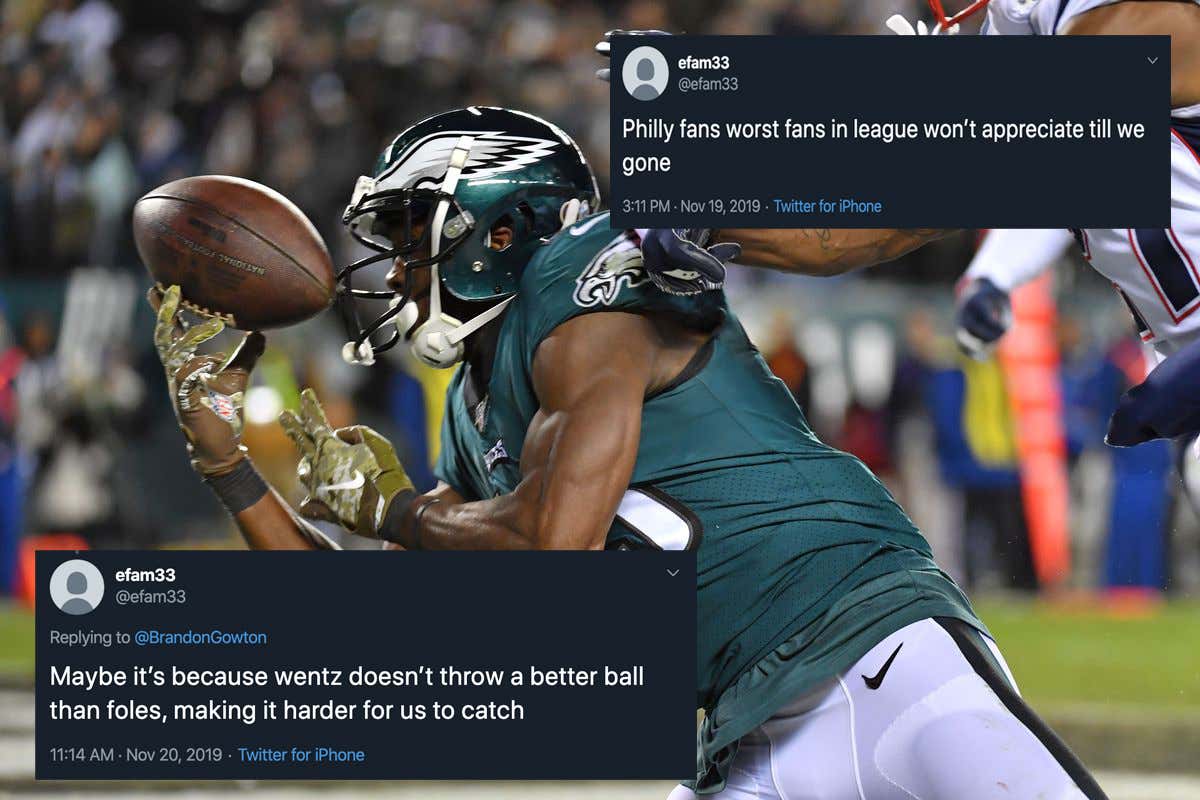 Alright, folks, I have a little request for all of you back home. There are only 40 or so days left in the year 2019. So when we start the new year, can we please all make a promise to one another that we're going to stop giving a shit about burner accounts? It might not be every single GM or every single coach or every single player who has one, but burner accounts aren't these super rare things to stumble across. I know that the Bryan Colangelo one was a special situation since it ended up in him getting fired, but I'd imagine that there are hundreds of burner accounts within the NFL or across any other league. Which means that it's just a tired story at this point.

Now with that being said...I, just like everybody else in the city of Philadelphia, have been dreaming of the day that Nelson Agholor's time with the Philadelphia Eagles comes to an end. So I understand the allure of wanting to believe that this new Twitter account that surfaced this month belongs to Nelson Agholor and I understand the wishful thinking that he'd receive the same fate that Bryan Colangelo just across S. 11th St.

But the burner account that's in question? Well I know that Nelson Agholor is absolute dog shit at being a receiver in the NFL, but there's just no chance that he could be this bad at disguising himself with this account.

Now the argument for this account actually belonging to Nelson is that his middle name is Efamehule, and that he uses the pronouns "us" and "we" when referencing Eagles players and specifically Eagles receivers. But anybody who has ever visited www [dot] wikipedia [dot] com before can figure out what Nelson's middle name is so it's not like that's something that only he would know. Also, the fact that the account uses "us" and "we" so frequently seems like it's someone who just has way too much time on their hands and is trying too hard to make it look like it's blatantly Agholor.

Also, just look at that last tweet. "Woulda been a catch if foles threw it". There's no shot that Nelson actually says anything like that. Not because I don't think that he'd gladly pass the blame off to somebody else, but that's something you'd really only hear out of a 94.1/97.5 caller. Like that one right there is crystal clear that this is just some sports talk radio caller who is trying to stir the pot. And considering the first tweet from the account was on November 19th? It just screams of someone who is just as pissed off about Agholor killing this team as the rest of us, but has too much time on their hands and actually went through with creating an account to imposter Nelson Agholor impostering somebody else.

What sucks here, however, is that now everybody is going to be talking about whether or not this account is actually a real Nelson Agholor burner account. When we really should just stick to talking about how much this guy sucks and how Howie Roseman needs to be on the hot seat for keeping him around so long. I'm sure the intentions behind this account were pure--get Nelson Agholor out of Philly the same way that Bryan Colangelo was driven out of Philly. But now everybody is just confused as all hell and we're losing sight of the fact that Agholor STINKS, and that's the only thing we should be talking about this week.