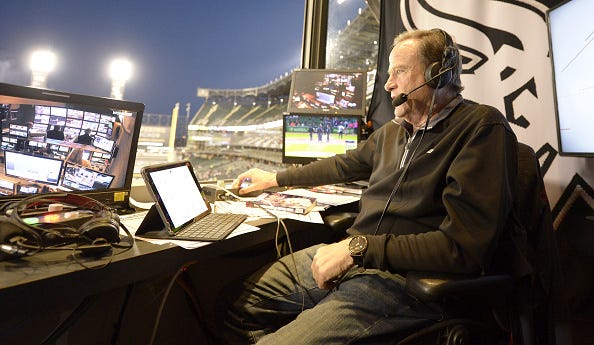 I've said before that I like to pick the brains of people I consider baseball savants as much as possible.  Just pepper them with questions on anything and everything baseball so I can enhance my dumb brain.  Steve Stone happens to be one of those people.

If you don't know Steve Stone, he's the White Sox color commentator and had an 11 year big league career in which he won the 1980 Cy Young Award with Baltimore.  Now I admittedly don't watch a ton of broadcasts outside of those that are nationally televised, but I will put Steve Stone's knowledge of the game right up there with anyone on the planet.  There is zero embellishment when I say that; he is a goddamn savant when it comes to breaking down this game.  Chicago fans will all agree on this as he was also the Cubs color commentator next to Harry Caray forever.

Dude knows his shit inside and out.  I can't go a single broadcast without learning something new about the game.  He's like Nostradamus too; he can predict the outcome of a play before the pitch is thrown just by looking at the batter's mannerisms, his stance, the pitcher's command, etc.  It's wild how often he does predicts exactly what will happen in an at bat.

Unfortunately, I do not have direct access to Steve Stone other than watching him on TV and now on Twitter, but he throws up baseball heaters on Twitter non-stop now.  His latest was opining on the Pete Rose/HOF saga, and per usual, his take nailed it IMO

Now, I've personally never really cared about the Pete Rose saga.  It was before my time and I didn't have an emotional attachment to him or the Reds.  But his career numbers are insane:

Because he was one of the very best hitters ever, I always figured "yeah, let him in The Hall" without giving it much thought.

But Steve Stone's tweet last night made me instantly reverse course.  Sure he claims he never bet on the Reds to lose (debatable) but… if you're not betting on the Reds at all, what does that tell you're bookie?  That you do NOT think the Reds are going to win, which is all he needs to hear.

In a round about way, not betting on your team is almost worse than betting on them at all, as Stone explains here:

I believe him, yo.  Idk why but I do.  So Pete Rose?  You're fired.  No Hall for you.  You broke the ONE rule you can't break, which is betting on the game, then even worse DIDN'T bet on it afterwards… and you did this knowing fully what the consequences would be.  It sucks, as you're one of the best to ever do it, but dems da breaks.

With the 2020 Hall of Fame ballot being released, we're going to get the Pete Rose scandal shoved down our throats again for the next few weeks, as we do every year.  Should he be in the Hall of Fame or shouldn't he?  Will Derek Jeter get in with a 100% vote?  Who's going to be the holier than thou asshole writer that doesn't vote for Paul Konerko?

All questions that will be asked on top of the Pete Rose debate, and all questions I will leave to you all in the comment section to answer.