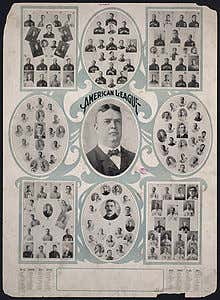 Ban Johnson announces his intention to take on the National League as what had been called the Western League formally becomes the American League. The league which had previously had a minor league in the Midwest expands eastward to eight teams, matching the NL. The newly formed American League would lure players away from the National League over the next two years, before a settlement was made, allowing the creation of the World Series.

Byron Bancroft Johnson was born on January 5, 1864, in Norwalk, Ohio. While studying law in Cincinnati, Johnson struck up a friendship with Charles Comiskey, who was the manager of the Cincinnati Reds at the time. In 1893, at the urging of Comiskey and John Brush, Ban Johnson became President of the Western League, a minor league that was struggling. Johnson was a critic of the atmosphere at National League games, feeling they had become too rowdy; thus, he wanted to create a more friendly environment at his games.

As Ban Johnson took over the Western League, baseball was in a period of transition as American Association, and the Player’s League had just folded, leaving the National League as the only major league in existence. The National League added four teams from the AA and became over-bloated with 12 teams. Following the 1899 season, four of the teams were folded (Cleveland Spiders, Baltimore Orioles, Louisville Colonels, and Washington Nationals), opening the door for Ban Johnson to begin his plan to take his league to the next level.

The Western League continued to operate as a minor league under National Agreement, which had been a formal understanding between the NL and small league owners in 1900. However, Ban Johnson began laying the groundwork for the switch, as he announced plans to change the name of the league as smaller Midwest cities were push aside for bigger eastern cities. Three of the four cities that lost teams in the National League contraction would get teams in the American League, with the Detroit Tigers and the Milwaukee Brewers the only holdovers. Milwaukee would last just one season as the intent was to move them as well. Besides Detroit and Milwaukee, with three of the contracted cities. The American League had teams in Philadelphia, Boston, and Chicago, with the White Sox being owned by longtime Ban Johnson pal Charlie Comiskey.

The newly formed American League was successful at drawing star players from the National League and became a concern for owners from the senior circuit. In 1902, the Milwaukee Brewers became the St. Louis Browns. This meant that four of eight teams were direct rivals of teams in the National League. With worry about the increase in salary affecting both leagues, a meeting was held in 1903. At the meeting, both leagues decided to respect each other’s contracts, while the Baltimore Orioles were allowed into New York becoming the Highlanders. The meeting also helped created a series between the champions of both leagues to decide the overall champion of Major League Baseball.

Due to his successful challenge of the National League, Ban Johnson became the most powerful man in baseball, as the National League President never quite carried the gravitas that he had. This would continue until 1920 when the Chicago Black Sox scandal led to the creation of the Commissioner’s office. In 1927, after it came to light that Ty Cobb had fixed games in 1919. However, he was granted amnesty by Commissioner Kennesaw Mountain Landis. Ban Johnson, who was in failing health, sought to have Cobb banned but was rebuffed by American League owners who sided with Landis. This would lead the Johnson to resign