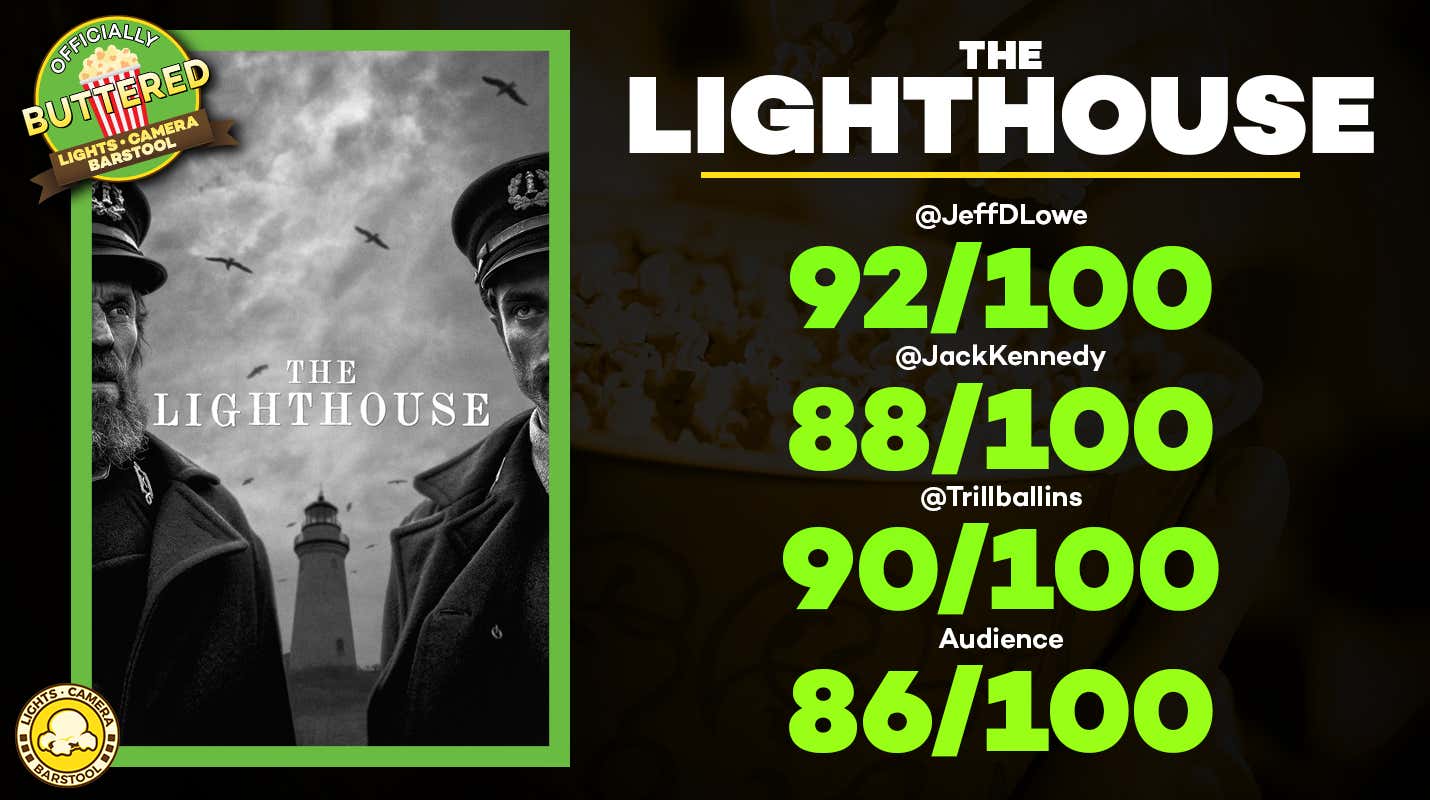 ‘The Lighthouse’ is fucking insanity. Is it a good movie, though? Let’s discuss…

Two lighthouse keepers try to maintain their sanity while living on a remote and mysterious New England island in the 1890s. (via Google)

JeffDLowe (92/100): ‘The Lighthouse’, one of the most uniquely insane movies of the decade, lives up to the hype with the help of killer performances from Willem Dafoe and Robert Pattinson. Robert Eggers’ latest release is a rare mix of art, mythology and a grounded setting and characters. While ‘The Lighthouse’ might leave you puzzled, it does so in such a thought-provoking and intriguing way.

When I first saw the trailer for ‘The Lighthouse’, I groaned and assumed for the worst. By worst I mean I assumed it would be an overly pretentious, snobby movie that acted much smarter than it really was. We didn’t get that, at all. A movie packed with Greek mythology and symbolism also had plenty of… fart jokes? It’s a movie that will both make you laugh and, at the same time, hit you over the head with suspense and tension. ‘The Lighthouse’, on its surface, is essentially the story of two roommates full of delusion, fear, and anxiety, which is where Eggers finds a way for audiences to truly relate to the characters of Wake (Dafoe) and Winslow (Pattinson).

But there is deeper meaning and narrative to the movie and its one that you may not grasp onto with your first viewing. Hell, for me, I’ve seen it twice and have still yet to land on an exact explanation for what unfolds in ‘The Lighthouse’. Without spoiling much… (pauses for spoilers), trying to figure out what is a reality and what is fantasy within the madness of our characters, and if both men we see on screen are who the story tells us they are, is the challenge the movie presents once it ends. I love open-ended movies, as long they don’t thumb their nose at the audience and leave everyone firmly in the dark without logic. Eggers succeeds with ‘The Lighthouse’ because he finds a balance that helps the movie avoid those shortcomings.

‘The Lighthouse’ brings the stunning visuals and artistry that were teased in its first black-and-white, square aspect ratio. But the movie should surprise any doubters with a humanizing story and setup that bucks the normal clichés of movies normally considered overly artsy and pretentious. While ‘The Lighthouse’ might not be for everyone (much like Eggers’ last movie, ‘The VVitch’), it’s a great example that Hollywood still has plenty of original and fresh projects waiting to be seen on the big screen.

KenJac (88/100): ‘The Lighthouse’ is as freaky and hallucinatory as advertised, weaving 110 minutes of fear and hilarity all in one. Robert Eggers is slowly establishing himself as a suspense and horror king, making back-to-back features, between this and ‘The VVitch’, that are intriguing and hard to talk about. Expect to be confused, to laugh and to be generally entertained by this deranged mess.

Robert Pattinson and Willem Dafoe are both equally incredible as Winslow and Wake. While Dafoe’s Wake is already crazy and serves as a sort of antagonist for the film, Winslow has a fantastic development as the normal guy turned crazy by isolation. The movie gets increasingly deprived as it goes on and both actors deliver fantastic performances to complement the spiraling environment. This was written wonderfully, staying true to the period while being simple enough for a dumbass like me to digest it. It sucks you into the story with sharp dialogue while also being hilarious.

This won’t be for everyone, but I think that’s self-explanatory. I think a decent chunk of people will already be dissuaded from seeing this because it is black-and-white. Anyone who is willing to see past that should love this movie. It’s certainly pretentious at times, but it’s an overall fun time.

—
The movie is Officially Buttered with all four combined scores meeting their desired marks. We did an in-depth review of the movie on Lights Camera Barstool for our mid-week episode last week and we will discuss ‘Ford v Ferrari’ and ‘Charlie’s Angels’ in this week’s episode. Make sure to rate all 2019 and 2018 movies in the links below.