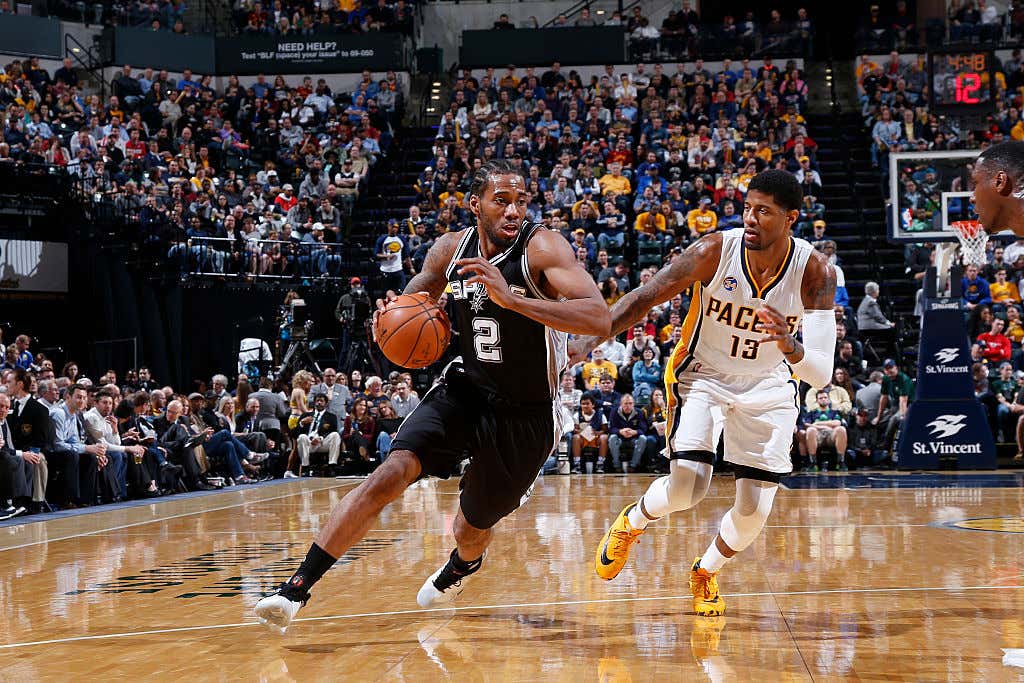 (ESPN) - In June 2017, George was dreaming of different scenery. When the All-Star forward informed the Indiana Pacers that he wanted to be traded, reports came out that he wanted to return home and be moved to the Los Angeles Lakers. But George had another team on top of his wish list.

A league source confirmed that the Pacers and Spurs talked, but San Antonio lacked the assets to pair George with Leonard. The Lakers also wanted George, but then team-president Magic Johnson would not trade the 2017 second overall pick (which would become Lonzo Ball) and Brandon Ingram, believing they could eventually sign George as a free agent.

Sam Presti of the Oklahoma City Thunder would eventually swoop in and acquire the Pacers star, but the idea of teaming up with Leonard lingered.

OK so maybe this is a little easy to say now given the fact that Kawhi and George have paired up in LA, but as someone who absolutely loves to play the "What If?" game when it comes to the NBA, this one fascinates me. What's cool about this one is think of all the ripple effects that happened as a result of this trade back in 2017. For starters, what happens with Victor Oladipo and Sabonis if they didn't make their way to IND? Oladipo has developed into a legit #1 option franchise type player, and Sabonis is no slouch himself proving to be a double double machine. It's clear that things weren't working out well for Oladipo in OKC, so it makes you wonder what other team out there could have then benefitted from poaching him and giving him they keys to their system just like the Pacers have. From the OKC side, if they don't land George, does Westbrook ask for a trade earlier? Think of the position they are now in moving forward because they were able to flip Paul George/Westbrook in the same summer. This team is loaded with young talent and more draft picks than you can handle which essentially saved the franchise. If George went to SA, none of that most likely happens and the Thunder find themselves in a potential big time pickle without a ton of great options.

Then you look at it from the Spurs side. If that pairing happens, maybe Kawhi never leaves, they obviously don't trade for DeRozan and the Raptors most likely don't win their first ever NBA title. Maybe the Sixers break through and finally don't lose in the second round. I can understand IND not being interested at what the Spurs had to offer at the time, it certainly wasn't better than IND's package anyway and with the Lakers not willing to fork over their best assets thinking they could just sign people in free agency (classic Magic), it's clear the Pacers made the right decision. I feel like their GM got killed at the time but it's worked out. You could argue that a trio of Kawhi/George/Aldridge would have been a force in the West that would have made them a contender though. As we've seen, if you have Kawhi you're basically in the conversation and while he was hurt that 2017-18 season at least he would have been there for years to come and the Spurs reign would have new life.

If we're living in this fantasy world, let's pretend that 2017 trade happened and somehow Kawhi didn't get hurt. If they beat GS that year or last year, does Durant eventually leave GS? That opens up a whole new can of "what if" worms that impact another handful of teams. That's what's so fun about this exercise, it's all fake and for fun but when you learn how real some of these potential trades were, I think it's cool to envision how different the league might look today.

In the end, Kawhi and George have found a new home together and while we haven't seen them in action in the same game yet, chances are they are going to be just as devastating as they probably thought they could be back in 2017. I'm sure this may be tough for Spurs fans to read, but as a Pacers fan and OKC fan I love how things turned out. Just goes to show though there are a million trade scenarios that are talked about that the general public has no idea even took place.