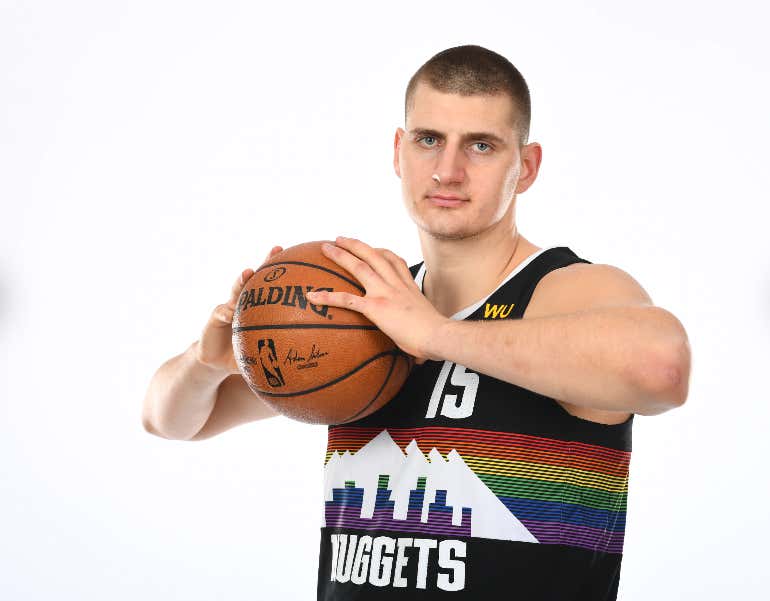 When Nike took over and released their first City Edition jerseys last year, there were certainly some hits and misses. When done right these can really play but sometimes we have some epic failures on our hands that bring shame to both the franchise and the fan base. Well, 2019-20 is no different. We've started to see teams announce their new threads as well as some leaked pictures online, so why not run through the ones we know about now to see how Nike did this time around.

OK here's the thing. The Wolves social accounts hyped this thing up big time and while I don't hate it, I can't say it justifies the hype. Honestly the Prince inspired ones from last year were way cooler in my opinion. Now this is a situation where I think the City Edition is actually better than some of the trash we see MIN wear normally like those neon green disasters, so I'm going to in the end give them a thumbs up.

As someone that loves the white rainbow Nuggets jersey, I have to agree with that tweet, these things are beautiful. Honestly the Nuggets have like 500 variations of their uniform but this will always be the best. Love the tribute to the classic Nuggets jersey, I like how they have these on black, then you pair it with the rainbow court design and this look will always play. Two thumbs up and if you disagree you might not have working eyes.

I get what they are trying to do by tipping their cap to the Dallas art scene, but I dunno these just don't do it for me. They remind me too much of that BKN alternate with basically the same font if we're being honest. As you can expect the internet immediately clowned them for these and I won't argue. Thumbs down.

Ok this might be the most controversial jersey in the history of jerseys. What fucking color is this. Kanter's picture looked teal as hell, then there was video evidence that maybe it looked more green and wasn't actually teal, now there's this picture. My brain doesn't know what to believe and I'm trying to reserve judgement until I see it with my own eyes and on TV or something because I still don't exactly love it. The team is officially announcing them tomorrow and I'm hoping everyone in the world has a dogshit camera because I'm just not sold on this look. For now, sideways thumb.

I would love to know what Lakers fans think of this. On one hand it's sort of ugly, but I love the nod to Shaq, I love the MDE on the side for "Most Dominant Ever" but that's about it. Honestly they should have just brought back the blue alternates. That seems like a no brainer but hey maybe they'll finally lose a game if they look like garbage so I can't hate it.  Thumbs down though.

Very clean, kept it simple, definitely one of the few that should be lumped into the good category. Now I can't guarantee that this will make the Sixers actually play to their potential, but there's no denying they've had some fire jerseys over the last few seasons. Two thumbs up.

Another cream option, at least this one makes sense considering MIL is cream city. They get two thumbs up not just for the legit look but also I can't help but giggle every time I see the name on that jersey. I have a simple brain, so what. You add this with Giannis' blow job bell and the fact that the Bucks are ROLLING right now

and there sure is a whole lot of cream being dispersed in that city.

Yikes. This is basically the same design as last year, only with a different color scheme. Last year they were like dark blue and gray and honestly every year they don't just bring back the Grant Hill Era Pistons alternate is a year they will get two thumbs down from me.

The Blazers are another team that usually nails their alternates. The one they have for the 1977 Championship team are fire and it's more of the same with these. Maybe it's a personal preference, but I love POR color scheme/font/the whole thing. Two thumbs up which is important because their team stinks and needs any distraction they can get.

The second that the Grizzlies announced before the year that they were bringing these back they immediately won this competition. I don't even need to go into any further explanation, they are pairing this with a throwback court and they are a team that gets it. Bring back the classics, and few are more classic than this. Two giant thumbs up.

I hate to say it but I like their other alternates so much better like the ones they wore last night. The Kings alternates are usually great but for some reason I don't love these. I get the red as it's playing into the 35 seasons and all that, but it's a meh from me. Thumbs down.

Am I the only one that thinks if this is going to be Space City Saturday they should have put Space City on the jersey? I do like these better than what they had last year but that feels like a pretty easy no brainer. Thumbs up.

Sooooo the Jazz just kept the same look? That's kind of boring and I'd be a lot more upset if they didn't already bring back the purple mountain alternates so at least they get a pass for that. If this truly is the final season of this option they better bring the heat next year. Sideways thumb.

So far these are the ones I've seen and I'm sure by the time you read this more teams will have announced their look for the 2019-20 season. Overall I would say this is a little better than last year but we'll wait for the full league to be released before any definitive conclusions. Of what you saw so far, who has the best (you can't choose MEM that's too easy)? Who should immediately burn their look and start over? I'm loving life as a MEM/DEN/MIL/PHI/POR fan but not so much as a BOS/LAL/DAL/ORL fan. What say you?