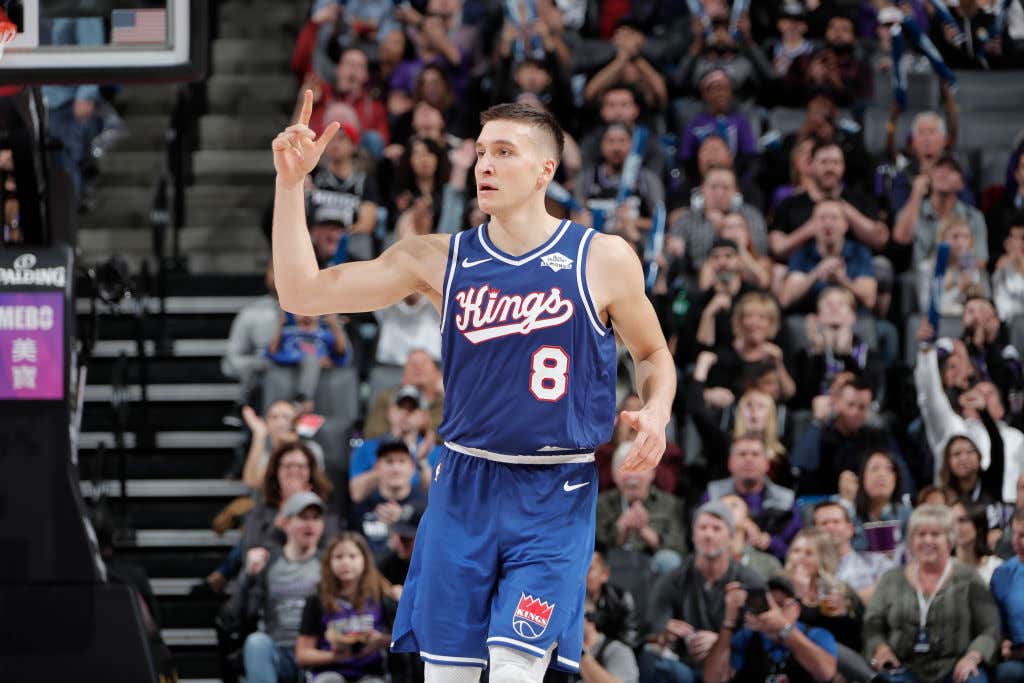 Good morning everybody happy Wednesday and welcome back to another edition of Last Night In The NBA where we bring you up to speed on everything that went down from the night before in the Association. It was a relatively light night on the schedule with only 4 games, but that doesn't mean we didn't have our fair share of drama. This is the NBA we're talking about after all. I'm not sure what you might have been watching instead, but if you missed any of the action from Tuesday night here's what happened.

Hey good job Warriors! That's how you look somewhat like a real NBA team! Was that so hard? Who knew all it took was facing a bad rebuilding Grizzlies team but hey, for a team with the worst record in the NBA and one that had lost 7 straight, I imagine the Warriors will take it. It was a vintage Draymond night where he gave you a little bit of everything, and especially thrived as a passer

which opened up things for everyone else who if you can believe it didn't shit their pants and actually produced. Guys like Glen Robinson III and Alex Burks put up nearly 50

and the Warriors used a big second quarter to get their separation and to their credit actually was able to maintain it and not have a fourth quarter collapse. Also you love to see Chriss actually look serviceable, especially since Draymond talked all that shit about how the Suns ruined him and the Warriors were going to fix him since they were a real organization

who knows how many of these the Warriors will end up with this season, so I say let them and their fans have this moment.

For MEM, OK so not exactly ideal that you lose at home by 19 points to the worst team in the league, especially when there have been times this season where you've shown flashes of being a team that might actually have a pulse. Unfortunately their shooting did them in, and even though he had a nice 20/6 Ja Morant's efficiency wasn't ideal at 7-20

and not getting much (8/0) from Jaren Jackson Jr certainly doesn't help things. I will say though Dillon Brooks continues to have a really strong season for MEM and doesn't really get talked about as much when discussing their young talent, but he's held that SG position down and is actually producing

As a Grizzlies fan you have to be thrilled with what you see from Brandon Clarke who is proving to be one of the best steals of this entire draft, he was their main guy off the bench and he is playing his way into real minutes

But like most young teams, inconsistent shooting, some defensive lapses, and getting killed on the glass ultimately proved to be too much.

As you know by now, Melo made his Blazers debut last night and it was……..eh. It's tough because you have to allow him to get his feet wet and all that, but many of the same issues we saw in OKC and HOU we saw in POR

He shot 4-14, was a -20 in a game they lost by 11, the shot selection was still questionable at times and whether it's fair or not he is going to be big time judged on this one performance. I will say though if he is able to make his threes like he did in this game that's going to help. Anything to give Dame/CJ more space is going to be beneficial, but as we know the problem with POR all year has been their defense and Melo doesn't exactly help with that. This is a prime example, can't be giving up 115 to the Pelicans if you want to be a legit playoff team in the West. Of course Dame didn't play because of back spasms so my guess is this turns out differently if he was active, and CJ certainly did his thing

But the effort issue with Hassan Whiteside is back, their other big guns weren't all that efficient, and if not got a solid showing from Nassir Little off the bench it wasn't like the second unit was all that great either

I know it's still relatively early but 5-10 is NOT where POR probably thought they would be and it's not as if they play in an easy conference where you can dig yourself an early hole and still be OK. They need to figure this shit out quick or their season could be over by like Thanksgiving.

For NO, welcome back Brandon Ingram

always nice to have a guy experiencing a career breakout year back in the lineup, and they needed him because this thing was close for the first 24 minutes until a big third quarter ultimately was the difference. The Pelicans are one of those teams where their talent is maybe a little bit better than their record, you have buys like Redick and Holiday who are legit veterans

all mixed in with high ceiling potential rookies. You know about Zion, maybe you've seen NAW ball out over the last few games, but do not forget about Jaxon Hayes. This dude is young, he's athletic as fuck and he can definitely be their center of the future

The Pelicans have now won a couple in a row and believe it or not they get like one more good week and who knows they could be knocking on that 8/9 seed spot just as Zion should be getting back. Remember they are without Lonzo, Harty, Okafor, etc right now so that would be pretty surprising.

OK so maybe the Suns are falling back to earth a little bit but that's expected. Certainly doesn't help when Ricky Rubio returns and you get a total of 1 point on 0-7 shooting but hey bad nights happen. The bad news is the Suns slow start dug them an early hole but I give them credit because they could have folded and been blown out, but instead they fought back, dropped 71 points in the second half and nearly pulled off the comeback

You honestly can't expect them to win a game in which Aron Baynes does not play considering he's been their most important piece all season, and look there's no shame in losing in SAC right now, even the best team in the NBA just did it.

For SAC, they looked big time dead at 0-5. Luke Walton on the hot seat, the potential internet clowning for being an overhyped team that is just the same old Kings. But now? Shit now they've won 6 of their last 8, Bogdanovic had the best game of his career and they pulled out a win despite Buddy Hield going 3-14. Not bad!

Now the second half was certainly an issue, can't be giving up 71 points at home and it did get progressively worse as the game went on, but hey the Kings aren't complaining right now they are just trying to get out of this early season hole. I guess maybe Luke Walton should be given the benefit of the doubt considering he lost his two best young players and this is a team that is showing just how dangerous they can be when their shooters get it going. Sunday it was Buddy Hield, last night it was Bogy (who is going to get PAID this summer by someone).

I respect the hell out of OKC. It always seems like they are in games they have no business being in, even against the best teams in the league. Now they got jack shit from Chris Paul who was 1-7 and had 4 points so you would think if that were to happen on the road against LAL that they would get their dicks kicked in. Well, Gallo and Schroder carried this team and nearly pulled off the massive upset by themselves

every time you thought the Lakers were going to pull away and they got the lead to 9 or 10 OKC immediately responded with a quick run to make it a 2 possession game. They were 1 or 2 DREBsd from actually pulling this game out, and it goes to show that even if their record stinks and they are 0-6 on the road, this is a team that is going to play you tough. The defense still can give you fits, they have guys on the roster than can really play, and sadly it looks like they are headed for NBA purgatory because this team is too good to tank but probably not good enough to make the playoffs.

The combined for 59 of the 112 and LeBron's triple double made some history as he is now the first person to have a triple double against all 30 teams. This isn't exactly fair because the only team Westbrook doesn't have one against is OKC, but add it to another thing ESPN can suck LeBron's dick over.

It's hilarious though that as good as those two were, the Lakers won this game because of KCPs offense. A huge layup late and then the game sealing three off a LeBron OREB, who the fuck saw that coming? It was huge since Kuzma had to sit due to his eye getting destroyed and the Lakers now are in sole possession of the NBA's best record (Celts play tonight) and have won 5 in a row which is the second longest active streak in the league only trailing HOU. Their defense continues to be legit which is definitely a surprise they've been able to maintain this level for so long, and they do own the leagues best point differential so I would say things are going great in LA.

And that's it! You're now all caught up with everything that went down last night in the NBA. We're back tonight with a full slate of 11 games so I hope you don't have plans tonight. Have yourself a great Wednesday!