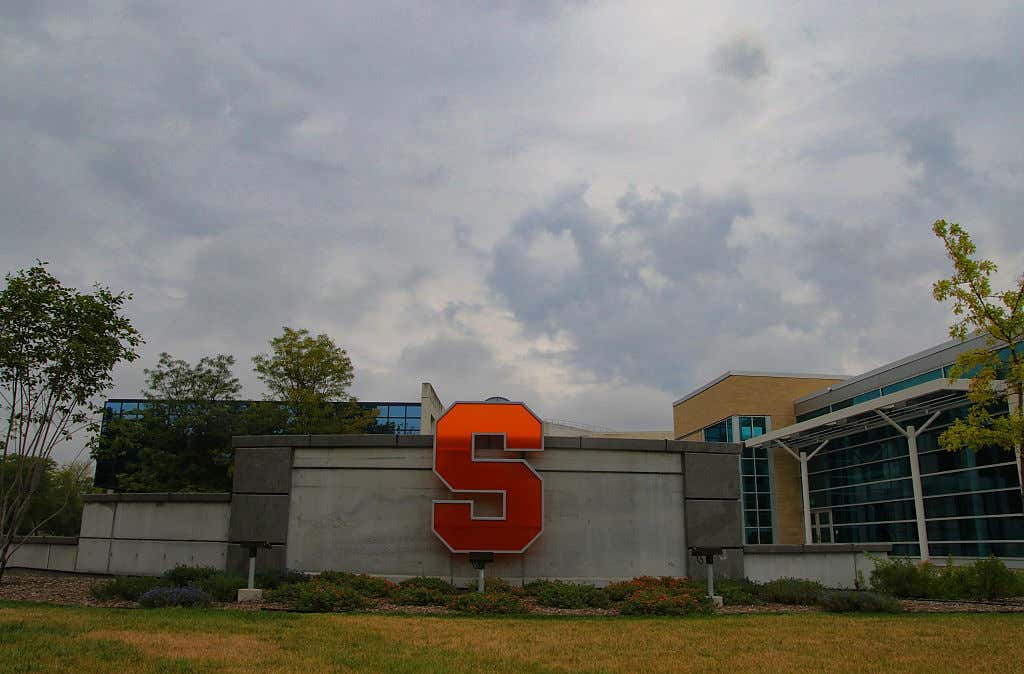 I'm not entirely sure how to even describe what's happening at Syracuse University right now. The university has completely lost control of this crazy situation and there's no telling where it's going to lead. I know this website is a comedy blog that you visit for entertainment, but it's also a place where you guys get your news and right now the shit going down at Syracuse is flat out insane. Let me try my best to sum this up.

Last week, slurs targeting Black and Asian students were found on two separate floors at Day Hall, an on-campus dorm building at SU. Instead of taking initiative, the university urged students to not spread any photos or videos of the vandalism. They pretty much told everyone to ignore what happened and move on, hoping it would go away. Oh and also don't tell the outside world about it. Maybe the worst way imaginable to handle it. Four days later they sent out an email to the students about the incident. Four days!  Which, in 2019, with social media, on a college campus, is the equivalent of roughly 4 years.

The day after the email, the chancellor sent out another email apologizing for how they've handled the situation. Pretty much they saw all of the outrage they were getting and came up with some sorry-ass apology that was utter bullshit. Just like the NCAA they are a part of, if the media and public didn't become outraged, the school wouldn't have done a thing about it. As a result there have been protests and sit-ins by students to try and take a stand for the university's handling of it all.

There have been 11 hate crimes reported on campus in the last few weeks: that includes a swastika being drawn in a snowbank, racial slurs being yelled at people, and a large group of people, some in the frat Alpha Chi Rho, reportedly harassing a black woman and yelling the N-word at her. The fraternity was suspended soon after, and eventually the school decided to suspend all fraternity activities for the rest of the semester. This is just a year removed from that extremely racist video leaking from SU fraternity Theta Tau.

And finally, what happened last night. Just when you thought this couldn't get worse, it got soooo much worse. Late Monday night/early Tuesday morning (around 1am) a white supremacist manifesto was Airdropped to students' phones at Bird Library, which is the big library on campus where tons of students get their work done throughout the day. The manifesto included a 74-page document written by the perpetrator of the March Christchurch mosque shootings, and includes neo-Nazi symbols and anti-immigrant sentiments. The same one he sent out minutes before conducting his attack.

I mean holy shit. There were rumors that the FBI was on campus today to investigate. Students were urged to not go anywhere alone. It's all just horrifying. You go to a school like SU, you shouldn't ever have to fear walking somewhere on campus or just doing something as simple as going to class. You're supposed to have the time of your life and live it up — not worry abut being the subject of a racial slur at every turn you make on campus. Figure it out people. That includes the chancellor and every official with the school.

Students have been told they won't be penalized if they don't attend class. Think about that for a second. It took them FOUR days to even ADDRESS something that was serious enough to make going to class optional.

If I'm a student there right now I'm not even thinking twice about going to class. Not a chance. I'm going home for Thanksgiving break early. Some teachers are still (insanely) holding class, but no one is going. There are cops everywhere and campus is a ghost town. It's got to be a goddamn nightmare to be a student at SU right now— I can't even imagine how much of a nightmare for any student of color.  They're about to host a soccer game for the NCAA tournament on Thursday. Maybe don't do that, just a thought.

There was never anything like this when I went a few years ago. Obviously the world has changed a lot since then, but I still could never even fathom something like this. Head home for Thanksgiving break early and stay safe folks.