The Bears offense is broken.  We are all fully aware of that.  It doesn't fall on one person though; the line has been bad, Mitch has been worse and Nagy has done shit like this all year long:

But as an expert Monday morning QB and arm chair offensive coordinator, sometimes I see shit like this...

and think that it's more than likely that Mitch just is a reallllllly bad QB and misses a read or target every goddamn time he drops back.  I mean, Braunecker couldn't be more wide open right there.  It's bananas that Mitch doesn't even attempt to look his way, let alone pull the trigger on hitting him for a first down.

And this is a weekly occurrence.  Yeah, Nagy has fucked up a lot this year with his play calling. Yeah, he deserves blame in what has been the most disappointing season in forever.  But come Monday every week, I can't help by think that maybe, just maybe if he had a competent QB that the Bears record would be flipped.  Just an average QB and they'd be 6-4 and not 4-6.  Right in the meaty part of the playoff picture curve.

Am I grasping at straws?  Probably.  But like the Bears offense, my brain is broken.  All of our brains are broken.  Here's Big Cat's take:

It's truly unbelievable how fucked this entire offense is.  Oh yeah, I haven't even mentioned the guy who put this roster on the field yet.  Here's another quick video:

Just inexcusable.  I don't know how it's possible to go from this headline:

to this statistical output: 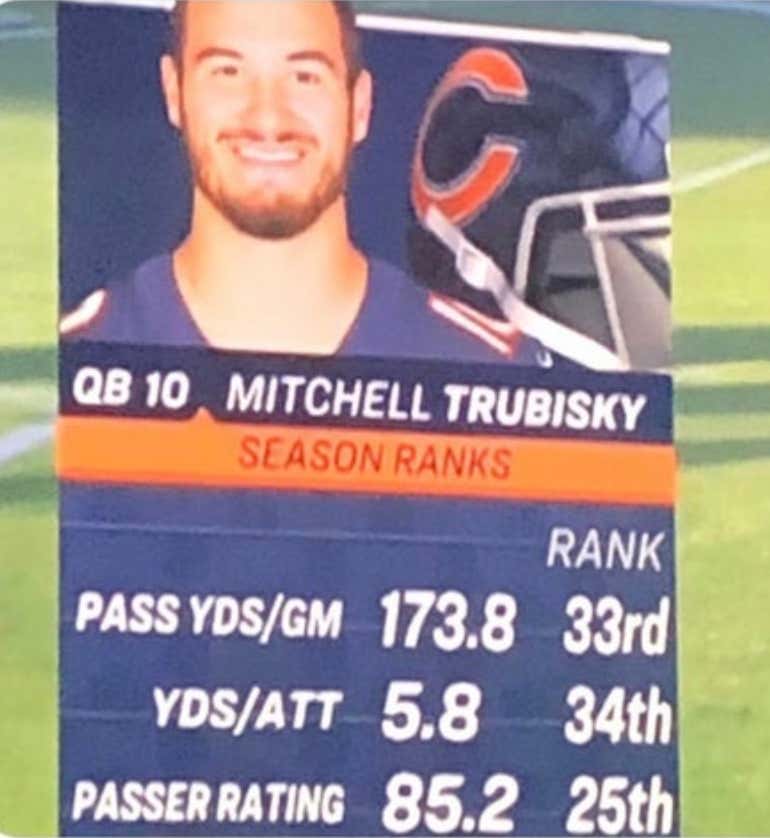 in less than a year.  Only one thing left to do: