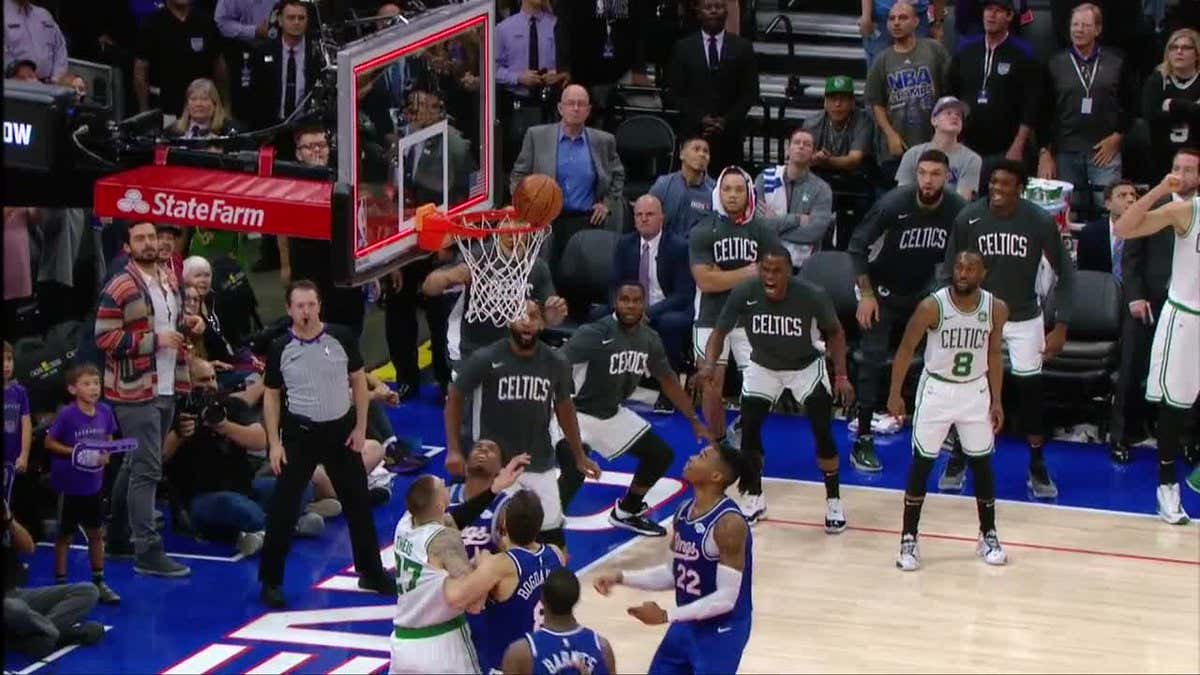 OK so even after having more than enough time to stare at my ceiling and replay the Marcus Smart floater over and over in my head, it still makes no sense to me. I was trying to figure out the physics of it all, using everything I could from the Wave Equation, to Newton's Second Law, to the Schrodinger Equations, and nothing could rightfully explain to me how the hell that ball didn't drop. Just kidding, I have no idea what any of those things are I just Googled them right this second but you get my point. Even though I went into this West Coast trip fully prepared for some weird shit to happen just like it does with every time you head out that way, this still was one I wasn't prepared for. I get it, the 10 game winning streak had to end somehow and maybe during that streak there were some games the Celts won that they maybe shouldn't have so in the end it all evens out but man what a kick to the dick that was. It was more than the final shot though, it was really the final 2+ minute stretch that made this such an infuriating loss.

So unfortunately, as Celtics fans we'll just have to deal with having the best record in the East. It's a tough life to live but that's their reality. This is still a team with the 2nd best offense in the league and the East's best record. Things could certainly be worse and in a quick spinzone at least now we'll see what this team looks like while facing some adversity. They end this trip with PHX/DEN/LAC who are all legit, and it'll be interesting to see if they let this brutal loss hang over them. If they win tonight who knows it's like this never even happened. Feel better? Eh, me neither because again how the FUCK did that floater not drop. Alright, let's dive in.

- Slim pickings to kick us off on a night where the Celts didn't exactly play all that great, but gun to my head I'd say it makes sense to start with Jaylen.

Not just because he led all scorers with 18/8, but I continue to be impressed with his approach offensively. I will say this was the first time he was truly careless with the ball and his handle looked a little sloppy resulting in 4 TOs, but he continues to show great effort on the glass and his outside shooting looks to be turning a corner. Jaylen is now up to 38% from three on the season which is the 2nd highest mark of his career, and he's making 1.6 3PM a night which is respectable. He's shooting it great from deep so far this month (45.5%), and while his streak of 20 point games ended at 4, we're seeing Jaylen develop into the reliable secondary scoring option this team needs.

You can tell just from watching how much more confident he feels shooting the three, but I like that he's still not over relying on it. Jaylen is still attacking and getting to his sweet spots whenever he wants, and I'd just like to see him not have games with 0 FTA like yesterday. You add 3-5 FTA to what we're seeing offensively already, and that's an All Star.

The Celts were supposed to have issues in terms of rebounding/rim protection by going small and starting Theis, and it's actually been the exact opposite. Another 14/10 in his 22 minutes, he seems to know where to be on the floor even in big moments, and the defense is legit no joke. Theis had a 93 rating on that end in this game, and was a huge reason why the Celts actually won the rebounding battle.

The best way I could describe Theis so far is a player that not only accepts his role, but is flourishing in it. We all know he's going to struggle against big, bruising centers but against everyone else he can more than hold his own. Daniel Theis still LEADS THE LEAGUE in block percentage of bigs who play at least 20 minutes, and is 3rd in Drtg. He's essentially putting up Joel Embiid type of defensive numbers for a big, and that's not hyperbole those are the stone cold numbers. What a gift he's been so far.

- On one hand I loved what I saw from Kemba Walker as a playmaker in this game, finishing with 9 assists and just 2 TOs

but that was pretty much it. He struggled shooting the ball for the most part, didn't snap out of it in the second half like he normally does, and he did miss that game sealing jumper that led to the Smart foul which led to the game losing FTs.

- The Celts climbed back into this game because they decided to actually defend in the 2nd and 3rd quarters. What a great idea if you ask me. SAC combined to score just 41 points in those 24 minutes and they shot under 40% in both. Why they couldn't do that for all 4 quarters I have no idea but at least they actually showed some effort.

- This may have been the best NBA game of Semi's career and I'm not joking. His 11 points on 3-4 from deep is what kept the Celts in it while they looking like absolute dogshit, and it was nice to see him actually have some positive minutes, lord knows his confidence needed it.

- He'll always have his issues, but you can pretty much pencil Kanter in for 10/7 with 3 or 4 OREB just like he did last night. His defensive positioning still makes me want to claw my eyes out, but there is no denying he is a real force on the offensive glass, something this team desperately needs if they are going to shoot like dickheads.

- I continue to be impressed with the defense from Jayson Tatum. His shot still might have issues but one thing we are not seeing is his offensive struggles impact his defensive intensity. He's been consistent and legit on that end all year no matter what his FG% looks like. That's a nice change.

- OK, enough of these bullshit first quarters. We've seen enough, try something else. Whatever plagues this team in 2nd quarters has made it's way to their starts and the numbers are infuriating. Among every team in the league here is how the Celts rank in 1st quarters

just terrible basketball everywhere you look. It's one thing to have starts like this every once in a while, but it seems like the Celts can't stop digging themselves in early holes every time they play. That's a bad habit to fall into and one that will be a thorn in this team's side all year if they don't figure it out. Good teams aren't going to blow double digit leads consistently so I would appreciate not spotting opposing teams 10+ points within the first 6 minutes of games.

It mostly boils down to being sloppy and playing with zero effort. The first quarter last night saw the Celts turn it over 6 times while making only 7 FGM and the Kings shot 45/50%. You do that on the road and what do you think happens?

- It was bound to happen sooner or later, but getting worked on the the offensive glass proved to be costly. SAC snagged 10 which accounted for 17 2nd chance points, including 6 OREB in the fourth quarter. That gave them a 13-4 advantage in second chance points in a quarter they won by 5 points. Some might say that could have been the difference. Where was Robert Williams I wonder, considering he played 0 second half minutes. Was his ankle fucked up? Feel like they could have used his size.

- Where was the perimeter defense? Just a question.

- Whatever the plan was to limit Buddy Hield, it's time to rip that shit up and never do it again. Nobody had a tougher time on him than Marcus, and if we're going to talk about all the people he shuts down, we also have to be honest about the time when someone gives him the business. All those big time threes at the end of the game came against Marcus. Then there was the whole losing Buddy Hield in transition for open threes which should be punishable by death. You can live with him making tough shots, what you can't live with is mental mistakes that give a great shooter while open looks at times when you cannot afford to give up wide open looks.

- Speaking of Marcus, a tough ending for sure and not just because of the missed floater. I won't show it again because fuck that shot, but it started with his defense down the stretch and then the play right before the game ending FTs. You love the hustle to get the OREB, but you can't love his decision to try and go back up with it. Maybe it all happened so fast that Smart had a brain fart and didn't realize how much time was left on the clock, but that's a possession you have to just pass/dribble back out. No need to force things. Then once he did, the foul at the end was brutal. Sure it's a 50/50 call but guess what you aren't going to get the benefit of the doubt on the road, and the Basketball Gods aren't going to reward you for boneheaded plays.

It was a sequence that had good intentions sure, but it ultimately played a huge roll in why the Celts lost this game. That's a tough one.

- But seriously, how the hell did that floater not drop. I get Smart isn't the best shooter, but when the ball rolls around the rim for that long it drops no fewer than 99.9% of the time. I've done the research.

- A 5 point lead with 3 minutes left, that's a game you have to win. Step on their throats and pull it out. Instead they gave up a brutal Bogy three to give the Kings life (even though they had like 3 tries at it which was bullshit), and then you started to panick offensively which only allowed things to snowball. Need better late game execution on both ends.

It's an early loss in November, so take it for what it is, but this was still frustrating as hell and honestly it was a game you need to take considering what's left on this trip. Show up tonight and play well, especially defensively, and things will sting a little less, but the Suns are not going to just roll over. I'm excited to see just what type of mental toughness this team has because any legit contender would stop the bleeding immediately and wouldn't let things snowball. Last year, all they did was let these type of losses impact their play, so let's see how different this group really is.