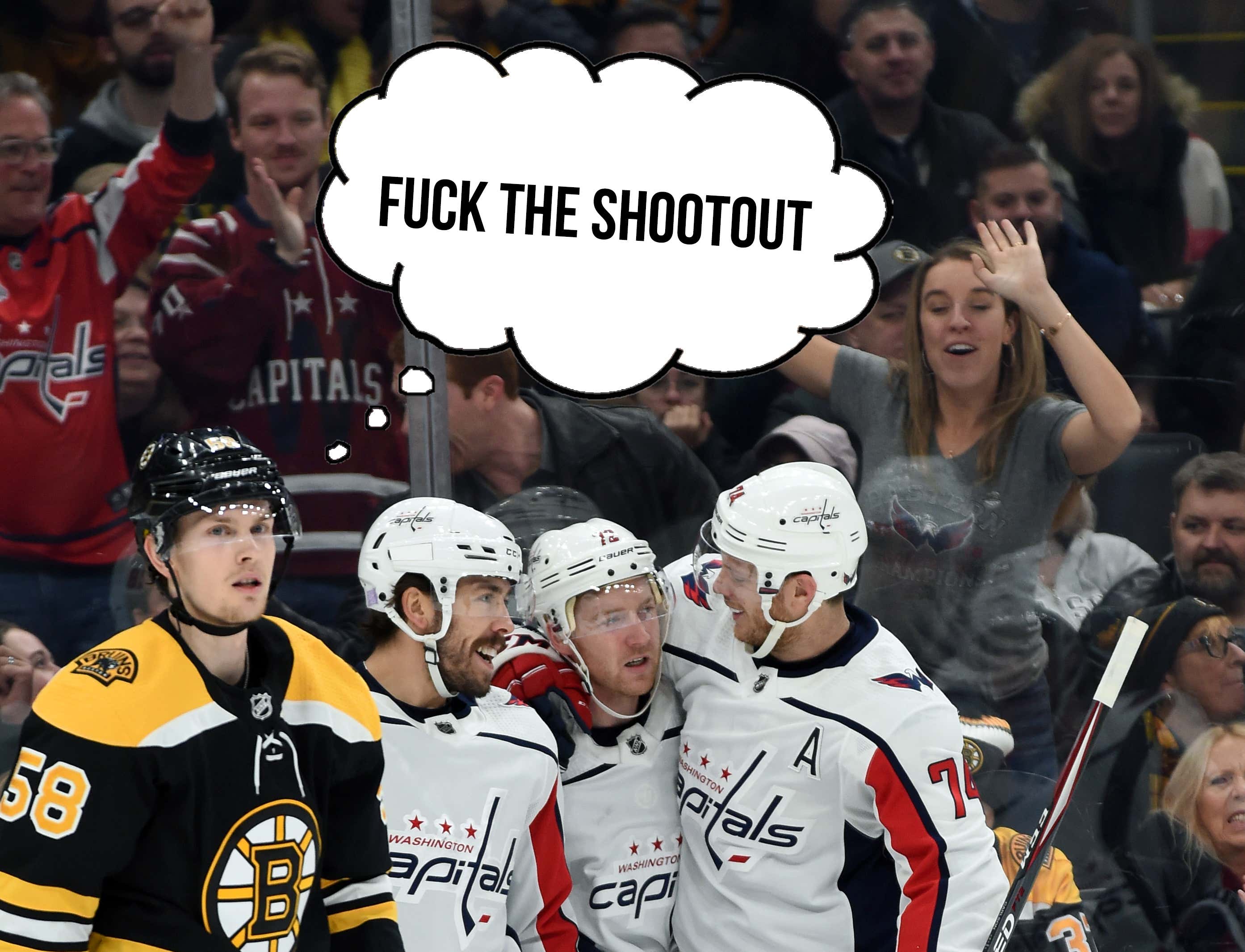 Stop me if you've heard this before, but the Boston Bruins once again lost in the shootout. 0-4 this season. The Capitals tied the game with 58.6 seconds left in the 3rd to send it to OT/SO, yet the Bruins once again couldn't score more goals than the other team in the skills competition. Kick in the dick all around.

Danton Heinen with a slick cross ice feed to Charlie Coyle and the Bruins opened the scoring on Saturday night. 1-0.

Travis Boyd tied the games for the Capitals with a redirect.. that also redirected off Urho Vaakanainen's stick and in. 1-1.

David Pastrnak recorded his 17th goal of the season in the 2nd period, David Krejci initially set up Charlie McAvoy but Chuckie missed the wide open net. Pasta buried the carom off the boards and gave the Bruins 2-1 lead heading into the 3rd.

With 58.6 seconds to go, and Braden Holtby pulled, TJ Oshie potted the game-tying goal as Zdeno Chara failed to clear the puck out. Tie game 2-2.

The B's had 2 chances to win it in the SO (David Krejci, Brad Marchand) but ultimately it was Jakub Vrana's (filthy) goal that was the difference.

- Patrice Bergeron suffered a LBI vs Toronto and is "day to day". Paul Carey (100th career game) was recalled from Providence in his place (Torey Krug placed on IR). They didn't want Bergeron's injury to "linger" and him miss more games because of it. I think he had a shift where he got tied up and his leg got caught funny. Will look for the replay. Finished the Leafs game in a little discomfort. Bruins just being careful.

- With Patrice Bergeron out of the lineup we got to see David Krejci move up and play with Brad Marchand and David Pastrnak. At times a little out of sync but liked what I saw. Hopefully Bergeron isn't out too long.

- whispers Charlie Coyle is shooting the puck. And Guess what he's got goals in back to back games. Thought Heinen had a few turnovers the other night vs. Toronto, but boy what a feed tonight for Coyle.

- No wonder Washington is (one of) the best team (s) in the league. Without Halak the Caps could've easily taken the game over. The Bruins did a great job stifling them in the neutral zone. But goodness this Capitals team is good. They just wear you down, 39 SOG in regulation. They finally broke through with less than a minute left in the game.

- Liked what I saw from Charlie McAvoy (again), just seems like he's squeezing the stick. He's so due. Wouldn't be surprised if he gets his first in New Jersey.

- Both teams were playing on the second night of a back to back. Don't believe Trent Frederic and Paul Carey saw the ice in the 3rd at all.

- Jaro Halak was a rock in net tonight. Had an unbelievable save on Ovechkin in the SO but ultimately couldn't stop Jakub Vrana.

I'll take 3 out of 4 points on a back to back but god damn. That extra point was ours for the taking. 58.6 seconds away from a regulation win.

Back at it on Tuesday night, Bruins head to New Jersey. We'll see if Bergeron travels with the team.