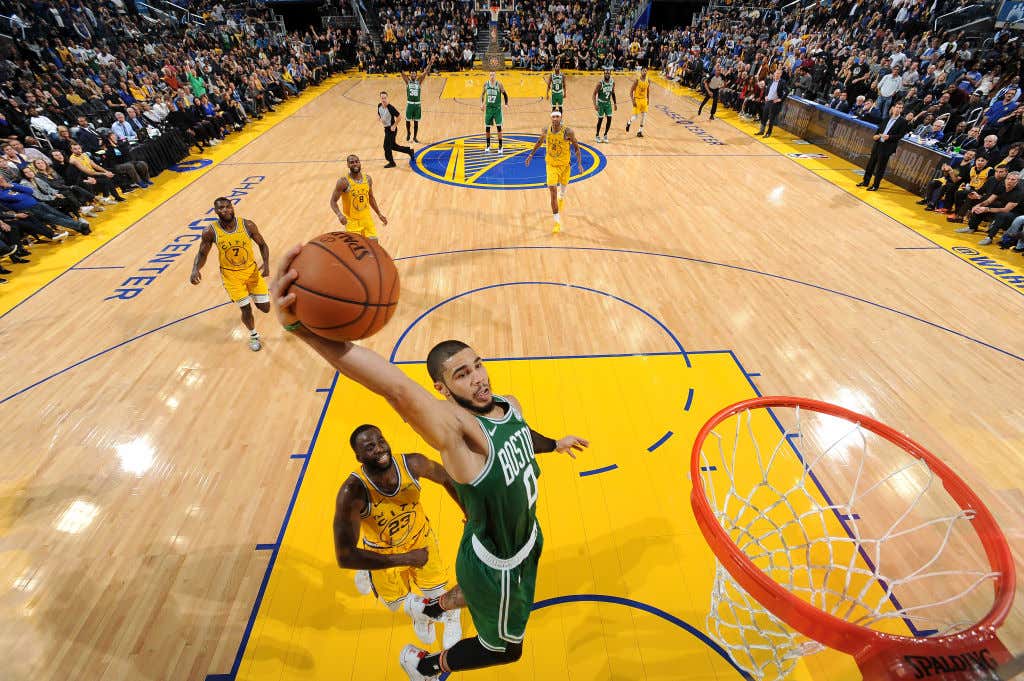 Whenever you go out West, you have to prepare your brain for some weird shit to happen. There's just something about an Eastern Conference team heading out and playing late games that always results in some weird stuff happening. I can guarantee you that this will not be the only time this happens on this 5 game trip. A random player who stinks 99% of the time is going to get hot, there will be circus shots that fall against you that have no business going in, bad teams will play you tough because that's simply what happens. We've seen it with a lot of the other Eastern Conference contenders when they've gone out West for their trips, and last night was the first instance we saw it with the Celts.

The Warriors stink, you know that, I know that, they know that, everyone knows that. It's not their fault, they've had some of the worst injury luck I've ever seen, and as a result this is a rebuilding year for them given the fact that their roster isn't exactly what GS is used to over the last few years. So why did the Celtics find themselves in a dogfight until the final minute against a team that's 2-10? Well partly because they played like dogshit to start, but also because when you go West weird shit happens. The key to a successful West Coast trip is seeing how you respond when you face that adversity, when things aren't going your way and the crowd is against you. We hadn't seen the Celtics deal with that really outside of PHI where they caught their only L of the season, so I was interested to see how they would respond now that they are the best team in the NBA.

Before we dive in take a moment and pray for all these other fanbases that have to root for a team with multiple losses and if you can believe it, don't already have 10 wins. I couldn't imagine living that way but there are people out there that do. OK, no let's dive in.

- We are witnessing one of Jaylen Brown's best stretches in his entire career.

His streak of 20 point games (4) is the longest of his career and in case you were wondering this is what a leap looks like. We talk about it all the time, it's a buzzword there's no doubt, so for anyone that maybe wasn't sure what that looks like, just watch Jaylen play. His handle is a real weapon, he is attacking AND FINISHING at the rim especially with his left, and oh right when it came down to someone needing to make some big momentum threes, there was Jaylen.

Then you factor in his defense (96 Drtg), how he's hitting the glass (8 rebounds) and his efficiency (9-17) and this is the exact version of Jaylen this team needed if they were going to be for real this season. He's putting up All Star numbers to start the year

and there is no arguing he's been one of their best, most consistent players on both ends the entire year. To think, people thought Jaylen coming back would ruin things and he wasn't worth his extension. Whoops!

Do I have any idea why Jayson Tatum cannot make wide open layups? No, no I do not. In fact the greatest minds on the planet often struggle with this same question. It defies the laws of physics and is one of life's true mysteries. The good news though is Tatum is so fucking good at everything else that I am willing to look past it…..for now.

Take last night for example. Tatum wasn't all that efficient, just 8-23, but when this team needed him most it was Tatum who made two gigantic late fourth quarter plays to seal this win. There was his brilliant steal off the tip which was immediately followed by his little in the paint jumper. Just like Jaylen Tatum is hitting the glass well (8 rebounds) and defending well (92 Drtg), and it just so happens these two are the only pair that's 23 and under and currently averaging at least 20 ppg. How about that.

- Would you rather have some marginally better defensive center…or Marcus Smart? He's usually the name thrown in any of these stupid internet trade ideas you see and I for the life of me cannot figure out how someone can think that removing Marcus Smart from this team, no matter who you add, will make them better. It's wild. You have this

a guy who can already guard centers and really any position, someone who is now a 40% three point shooter making 2.8 3PM a night, the heartbeat of the team and the man responsible for Tatum's big steal late. You want to know why so many of us are willing to die for this man and games like this are a prime example. Smart willed this team to victory and any sort of offense he gave you was a bonus. Making huge winning plays late, it's not a cliche, that's what he does.

But seriously though, you may not want to accept the fact that Smart is a legit three point shooter now, but the old jokes about him being a zero on offense are deader than dead.

- Outside of that first quarter it was nice to see the Celts defense get back to what we remember. GS shot just 41/17% and had 19 TOs and that looked way more familiar than when the Celts have up 133 in regulation or whatever. A total of 13 steals with every starter but Kemba having more than 1, if the Celts are going to be successful on this trip it starts defensively.

For some reason Kemba Walker cannot get going in the first half of games. He hates them and they hate him right back. But you get this dude to the fourth quarter? He turns into a completely different beast. Last night's 14 points on 5-8 shooting including 2-4 from deep goes to show that this team will always be in games late as long as they have Kemba at their disposal. What I loved was that even though he was their main option, nothing felt forced. He still got his teammates involved, remember Tatum also took 7 FGA in that quarter.

But we all knew about Kemba's scoring. I care more about what he continues to show us on the defensive end. He had a 94 rating, but it's also the eyeball test. Kemba is owning his space, he's being aggressive and the effort on that end is rubbing off on everyone else. For me at least, this has been the best part of Kemba's start.

- 24 assits on 37 FGM. That's the type of ball movement and unselfish play that is going to win this team a fuck ton of games.

- Last year this team gets down 15 early on the road against a bad team they lose it by 25. The quit immediately, probably fight so the internet can go crazy, and the whole thing sucks. This team? There was none of that shit. They figured it out, stayed together, didn't give up and for anyone that lived through last year's bullshit that may or may not have brought a tear to your eye.

- But what the fuck was that first quarter. Holy moly was that painful to live through. Gross offense, just 30/25% splits to start with 3 TOs and even worse defense. DLo gave them problems early and most likely would have all night had he not hurt this thumb, but the Celts just looked a step slow, sort of like they were just going through the motions. I certainly would appreciate if they cut that shit out for the rest of the trip. I'm glad they got it out of their system and it didn't cost them, because you can't be getting down 15 points to a team like this after like 4 minutes of basketball. That was bad.

- I'm not sure how I explain a 27-9 second half FT difference, especially when some of those 9 came late. For the majority of the second half it was more like 25-3. It is hard to win on the road with that type of discrepancy, and it wasn't like the Celts weren't being aggressive and doing nothing but shooting threes. Only 16 of their 46 FGA int he second half were from deep.

- Another night where there really wasn't all that much bench scoring. Just 17 points in total, I don't know how this hasn't gotten the Celts in trouble yet. Especially with no Hayward. Carsen missed all 4 of his shots, Grant had 2 points, and while Kanter had his moments on the block and Wanamaker seems to find a way to just be steady, they are surviving off the bare minimum right now when it comes to that unit offensively.

- Remember I said weird shit happens on the West Coast? Sort of like Alec Burks taking the most FTA he's ever had in the last 4 seasons. I'm sorry what is that. 4 years and this is the game he gets 12 FTA? That's weird.

- I need to say it again because it is so baffling. Jayson Tatum needs to do nothing but layup drills for a month straight. Fuck the rest of your game, figure your shit out around the rim because he's leaving 6-8 points on the board every single game.

10 in a row. Kinda has a nice ring to it ya know? Oh your favorite NBA team hasn't done that yet? I'm sorry, maybe one day. I mean probably not but it's certainly possible. This is where we'll hear from Sixers fans who are in denial about their mediocre 7-5 record or Nets fans who deep down want a do over when it comes to Kyrie and their 4-7 record that the Celts haven't played anybody We won't hear shit from Lakers fans given they just beat these Warriors but it's OK. As Celtics fans we know it's early, we know this doesn't mean much in terms of the Spring, but we also know this team is the best in the NBA and we're at the point where it is now undeniable. Feels great.