Let's make this quick cuz I gotta get home for lunch.

Some things have happened recently:

3. Baseball fans start looking at their own teams and wondering how hard they got fucked

4. The Milwaukee Brewers come under league wide scrutiny as one of the other teams that has been accused of stealing signs.

5. Yu Darvish opens up about getting his shit rocked by the Astros in 2017 (my blog here)

8. Cubs blogger Brett Taylor posts the following tweet yesterday to his near 105k followers about Yu Darvish starting in Milwaukee this season. 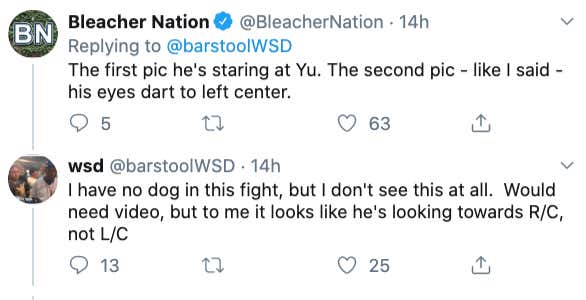 12. Brett produces video and this is where all hell breaks loose.

15. And like I said now hell has broken loose. People love this controversy and conflict and all this stuff. It's only going to get bigger and will probably be one of the biggest baseball related news stories next week or so. Like this is going to be around for a good chunk, and more and more Cubs fans will go put on their tin foil hats. And more Brewers fans will fight back and the whole thing is about to get really sloppy. Like exponentially sloppy.

And you know why?

I'm literally dying over here. WSD is like Archduke Ferdinand getting assassinated. Like there's already so much blood between the Cubs and Brewers. We just needed one big event to kick off the war and make things official and WSD delivered it for us.

That's the WSD difference. Not his teams or his players or anything. Absolutely zero allegiance to anyone here but the game of baseball. Guy's out here making sure everyone - even bloggers - have their takes well evidenced and supported at all times. Nothing slides on his watch.