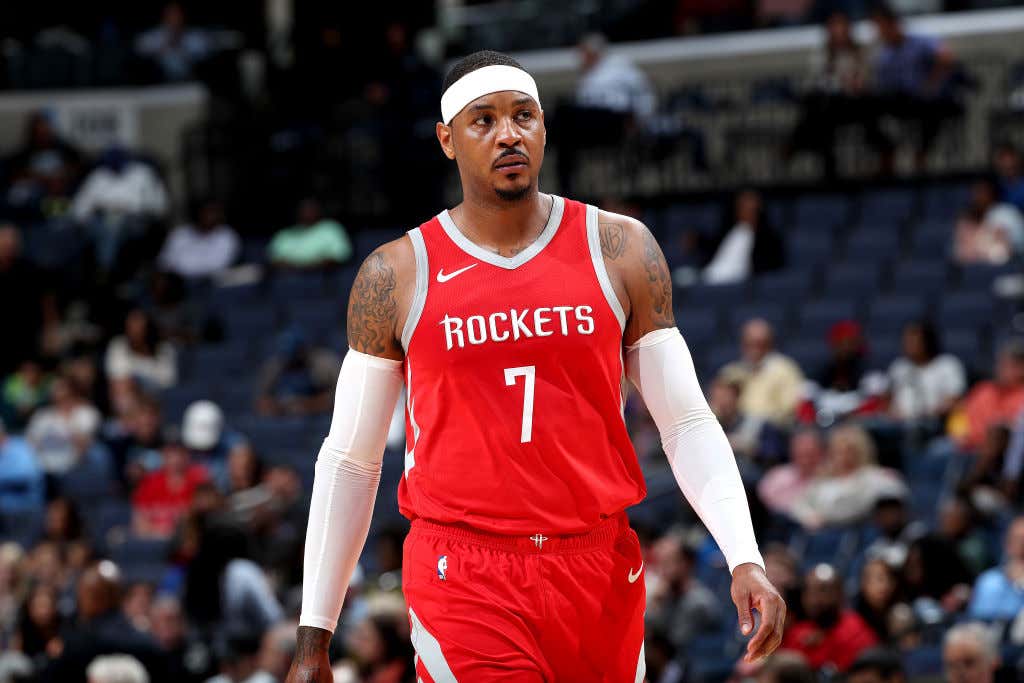 It has been a total of 372 days since we've seen Carmelo Anthony play in a real life NBA game. You may remember his 2 point outing on 1-11 shooting in 20 minutes in a loss to the Thunder on 11/8 of last year. It was a little weird nobody picked him up at any point during the year, and then when he went a full summer without a team it wasn't crazy to think we'd seen the last of Melo in the league. I was someone who thought he should play in the Big 3 to help his image, sort of like what Joe Johnson did, but here we are about 3 weeks into the season and Melo has his new home in Portland (guaranteed if he makes it past January 7th). It comes at a time when the Blazers desperately need to do something in order to save their season and it's anyone's guess if Melo can actually be a difference maker at this point. To get an idea of why they made a move like this, you first have to understand the position the Blazers are in.

This is obviously the first place you have to start. It's been pretty clear they need wing help so on the surface this makes sense. Al least Melo should be in shape/doesn't have all those extra miles on his legs seeing as he hasn't played in a year. Look at the production of their current wings right now outside of Anfernee Simons and Rodney Hood who have been fine

That doesn't exactly blow your dick off your body and those are some pretty key rotation players. You give Little a pass because he's a rookie, but the others? Woof. Look you can think Melo is washed, but he can give you 10 points on 40/30% and that's being conservative. This team desperately needs to add any sort of offensive life around Dame/CJ, and right now their wing production is a problem offensively, there's no denying that. Even what Melo gave in his 8 games in HOU was better than that, so from a talent perspective Melo is actually an upgrade, not defensively of course, but that's not why you bring Melo in.

Right now, the Blazers rank tied for 26th in the league when it comes to spot up shooting, averaging just 0.87 points per possession and shooting 32.3% which is the 2nd worst in the league. They rank in the 17th percentile in this area. Believe it or not, last season Melo showed signs as a spot up shooter, averaging 0.97 points per possession, shooting 36%. Of course it's a small sample, so when you look at his 2017-18 season he averaged 1.02 points per possession and shot 38%. That'll help simply for the fact that Dame/CJ command so much attention, in theory he could give the Blazers a respectable kick out option. If he shows he can be a consistent spot up shooter, that's only going to open up things for Dame/CJ.

This is a team that needs to find reliable offense, and I'm thinking putting Melo on the block as a 4 makes some sense for POR to do.

You may not have realized it, but Melo was actually pretty good in the clutch last year. A 116 Ortg / 83.3 Drtg split in his limited sample, and then a decent 104 rating in OKC, maybe they feel like they needed some additional firepower for those moments.

Where it gets tricky is the big problem for the Blazers is their clutch time defense, currently at a 135.5 rating. I'm not sure how much Melo helps there, but it certainly can't get worse than that seeing as how it's already 29th in the league.

In the end, this is a low risk high reward move for a team that absolutely had to do something at this stage of the season. As long as everyone understands Melo's role and he is willing to not be a complete asshole, in theory this could work. The Blazers have a need for what Melo could theoretically bring to the table, and who knows maybe he'll be on his best behavior since this is his one shot to show other teams in the league he can still play. This is what he wanted, he went on ESPN and told everyone who would listen how all he needed was a shot. Well now he has it and for the sake of the Blazers and their fans I hope it works out because their season is on the brink of being a big time disaster.