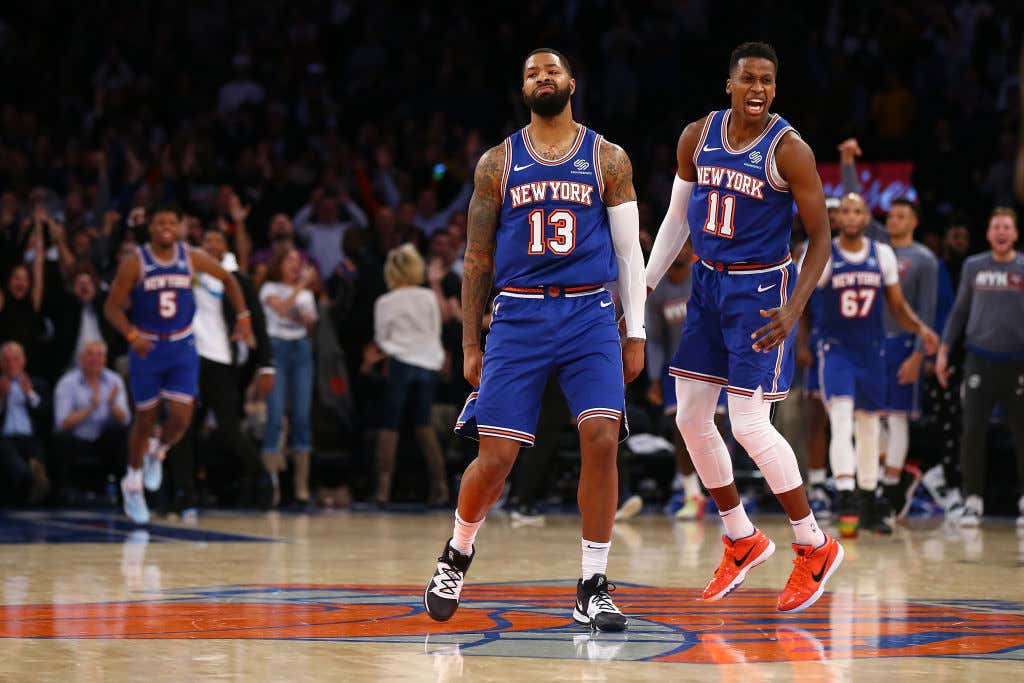 Good morning everybody happy Friday and welcome back to another edition of Last Night In The NBA where we bring you up to speed on everything that went down from then night before in the Association. We had a total of 6 games on the schedule last night which included more Giannis dominance, the sweet nectar of revenge, and a pretty important debut and a bunch of late game drama so if you were watching TNF or something like that and missed it all, here's what happened.

One thing that has been mostly true when talking about the Cavs this season is the fact that while they may stink, they play good teams tough. You haven't been able to just circle them as an easy win on your schedule. Unfortunately that was not really the case in this one as MIA had a 24 point lead at the break. The Heat had been rock solid basically all season, and now with everyone back for the most part it was more of the same

Despite them sort of running out of gas in the fourth quarter and the whole 18 TOs on the road thing, it's hard to not be impressed with what we're seeing from MIA. They play legit defense, they have shooting, they have clutch time scorers, and they very well may have the two best rookies of the entire class

you add it all up and that's how you get a team currently 2nd in the East.

For CLE, you're not going to beat a good team shooting 42/25% and having 18 TOs, but hey at least Kevin Love is still playing well so who knows maybe one day he can be a trade chip

but sadly this shit was over after the first 24 minutes because a team like MIA isn't going to blow that type of lead. The Cavs tightened up their defense in the second half for sure, but by then the damage was done.

It's pretty great that for 99% of their games they can look like absolute dogshit, but when playing the Mavericks the Knicks don't just look like a functional basketball team, they actually look pretty damn good! It's no surprise that 2 of their 3 wins have come against the Mavs. Never underestimate the power of revenge. This was a game where there was no way the Knicks could afford to lose, the fans gave Porzingis hell and Mook pretty much solidified himself as like a top 10 Knick all time

he led everyone with 20 and this was the classic Mook experience. There was a zero percent chance that he was passing that ball. I knew it, you knew it, everyone knew it. Waving off the future of the franchise so he could iso for the win. As someone who watched Mook for 2 years I knew that look immediately.

In the end it was a very therapeutic win for both the Knicks and their fans and even DSJ played well facing his old team which I'm sure was nice to see for Knicks fans. They may lose the rest of their games but the fact that they swept Porzingis sort of makes this season a success when you really think about it.

For DAL, I mean what else can we saw about Luka. He's arguably one of the best players in the league already, he's an MVP candidate, and he can't stop getting 30 point triple doubles

Porzingis had 20/11 in his return so it's not like he was terrible, but as a team the Mavs couldn't buy a bucket with just 42/22% splits, but shit they had every opportunity late to steal with game with some huge OREBs, but in the end the Mook dagger was the difference.

Are you a depressed Bulls fan? I get it, times are tough right now but there is light at the end of the tunnel I promise you. What might that be? Well how about Coby White setting an NBA record for most threes in consecutive games by a rookie? That's pretty cool!

for a guy that started like 11-55 or some shit, the fact that Coby White had made 13 3PM over the last two games is fairly impressive. Oh and Zach LaVine looks pretty damn good too

I'll give CHi credit, they played the Bucks tough through that first half. In fact they actually had a 1 point lead at the break. Sure the wheels fell off in the third where they got outscored 32-20, but they made the Bucks try which is all you can ask for from this team on the road. So they still have to figure shit out defensively, that's going to happen with a young rebuilding team, instead just focus on Coby White because he's balling out.

For MIL, ho hum just another 35+/16+ for Giannis. Pretty much what he does every single night

with Middleton out that means there is now more pressure on Eric Bledsoe to step up and be that consistent secondary scorer, and last night was one of those nights where he actually showed up

he finished with 31 on 12-14 shooting which I would say is pretty decent, and while they got jack shit from their bench, just 11 points in all, what they do have is an unstoppable MVP chasing Giannis who was ultimately the difference. An important win for MIL so they can keep pace with MIA/BOS and what's impressive is just 3 of their 8 wins have come at home. You forget they almost never lose at home and have a bunch on deck.

Sort of a good news/bad news situation here. The good news for LAC is Paul George is back and he looks just as good as you probably hoped as a Clipper fan

You also got 31 from Lou Williams who was making the spot start, proving really that he can still dominate whether it's off the bench or with the starting group. Either way Sweet Lou is getting buckets

That's the good news. The bad news is you gave up 132 points to the fucking Pelicans and now you sit at 7-5 which is much worse than anyone thought you'd be given the talent you have on this roster. With Kawhi sitting every other night it seems, the Clippers are dropping these early games and while you may not think it matters because it's November, in the West these all matter. Especially when seeding is going to be so tight. I think we all expected the Clippers to be near the top of the conference basically from the jump, even with PG13 missing the start. In reality they are now 2.5 games back of the 1 seed and are currently 7th, with a 1-4 record on the road. That stinks.

For NO, shoutout Jrue Holiday for being so damn good yet nobody really talks about him when discussing the better point guards in the league

I suppose they could have used Patrick Beverley considering Holiday lit them up for 36. Then you factor in the help he got from both Favors and Redick

and this was a game where they didn't even really miss Brandon Ingram which is crazy because of what a big scoring load he usually has. This team shot 48/52% with 18 3PM which is nuts for them, hell they even got a great performance off the bench from Frank Jackson

and had at least 34 points in 3 of the 4 quarters. I don't know where that came from but I imagine NO fans would like to see it more often. Great win for them,

Who's surprised another team went into PHX and came out with a loss? Happens to the best of em and the Hawks are no different. Even with Trae Young and Jabari Parker continuing to look awesome

unfortunately it was their defense that ultimately let them down. Brutal start with 31, 36, 37 points allowed to kick things off, you simply cannot win on the road in the West against a good team if you collectively decide to not play defense. Not sure who's idea that was but that person is a moron. Also not a great idea to turn it over 22 times but what do I know I'm just a blogger.

Also, is anyone talking about Cam Reddish's start? I mean this dude was supposed to be a shooter I thought, or at the very least respectable at it. He's been god awful and that might be an issue.

For PHX, you know they're taking a leap because now they are winning the games they are supposed to win. No losing trap games or any of that shit. Not when Devin Booker is playing some of the best basketball of his career

and even Dario Saric is getting involved

This was also a night where the PHX bench came up bit with 39 points, and surprisingly they actually showed a pulse defensively in the second half which helped them pull away. Now 7-4 and 5-3 at home by now you should be taking the Suns seriously, and to get a win like this with down nights from both Rubio and Baynes is great. The 20 TOs not so much, but a win is a win.

It truly sucks that Caris LeVert is going to be out for 4-6 weeks with thumb surgery, because it was pretty clear last night they needed his scoring. Instead, Kyrie went 8-20, they blew a 16 point lead, scored just 14 points in the fourth quarter and have now lost 3 straight to fall 3 games under .500. In fact this BKN team scored just 32 second half points, that's not great!

But hey, at least Jarrett Allen looked like a beast

and Spencer Dinwiddie continues to be a problem

but look, almost every team in the NBA has some sort of injury and you don't see them going 4-7 do ya. This is where Kyrie is supposed to carry them as the franchise guy right? When guys go down he steps up and makes sure they still find a way to win against a good team right? Oh, maybe not.

For DEN, they are one of these teams where their record is great and they are right where many expected them to be, but they aren't exactly playing their best basketball. Maybe that's a good sign, but as a Nuggets fan it has to be a little frustrating. Happy you won sure, but this team can play so much better

And that's it! You're now all caught up with everything that went down last night in the NBA. We're back tonight with 8 more games and you know the drill if you can't watch. Have yourself a great Friday!