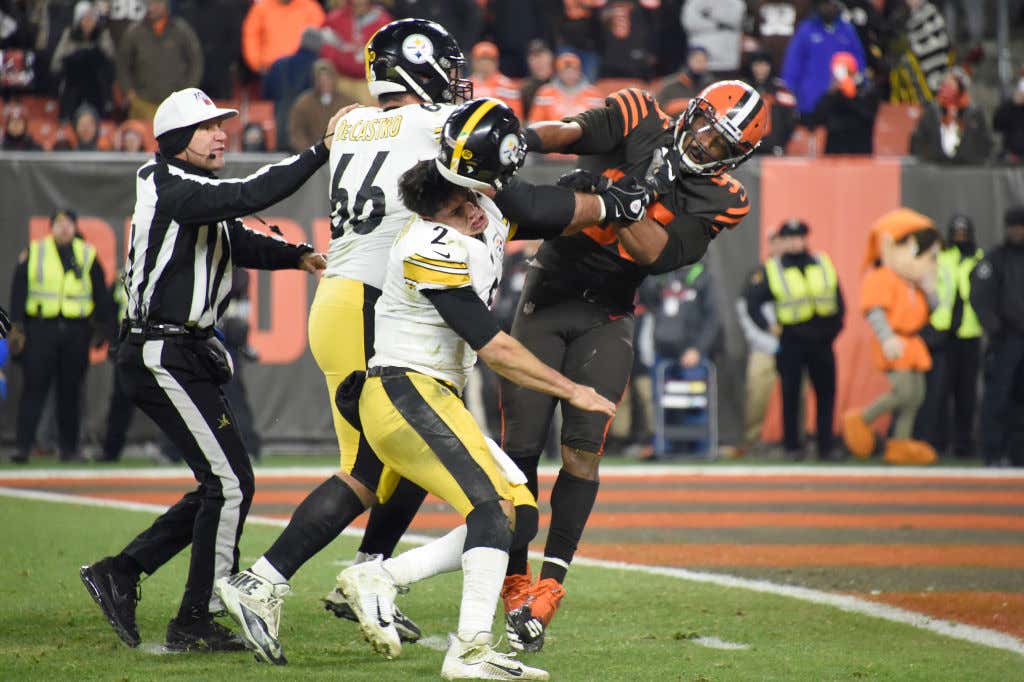 It's a question that has kept historians and scholars up all night for a century. "Does the NFL need enforcers?". Everybody has asked the question but it wasn't until last night that we finally got a definitive answer.

It is without a doubt that, yes, the NFL desperately needs enforcers out there on the field to prevent the type of shitheadery that we saw transpire between Myles Garrett and Mason Rudolph.

Would you ever see a hockey player bonk another player in the dome with his own lid? Of course you wouldn't. And that's because hockey players know that if they ever committed such an atrocity, they would have a couple of fists to eat for dessert later that night. I mean, sure, we've seen hockey players bash each other in the skull with their stick and attack unsuspecting players from behind. Hell, even Happy Gilmore once tried to take his skate off to stab somebody before. But those incidents are totally different because it wasn't with the other player's own equipment. You never mow another man's lawn and you never bonk a dude on the skull with his own bucket. You just don't.

But that right there is exactly why you need enforcers in the NFL. If these guys were allowed to actually square up and fight, this never happens because Myles Garrett would know that he'd have to answer the bell after an incident like this. And you know what? Maybe if these guys were actually allowed to fight and only got 5 minute penalties after, they wouldn't have so much pent up aggression that boils over into situations like this one. The NHL is kind of like the cool parent that lets their underage kid have a beer at the family party. You let them drink just a little bit when they're younger in the hopes that by the time they turn 21 they won't want to get completely fucked up just because there's that hidden allure of alcohol. The NHL lets their players fight so that they don't go insane and commit assault on the field of play later. The NFL opts for the assault instead. Just saying.