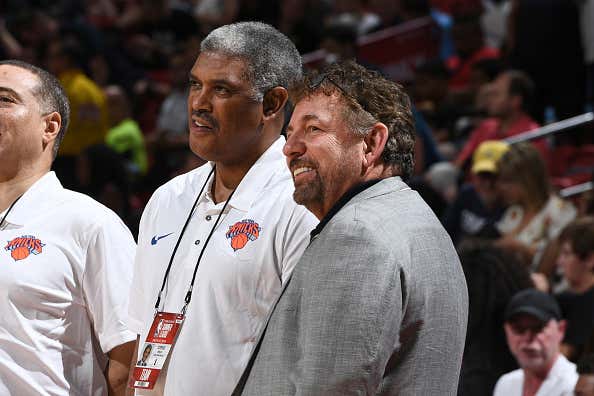 (ESPN) – Unlike other major stars recently, Davis had expressed interest in playing for the Knicks. But Mills and Perry told people they were turned off by the Pelicans’ high asking price of multiple first-round picks plus multiple young players, even though the Knicks had that type of package thanks to their Porzingis trade. They said it would have undercut their long-range plan of building through the draft and developing picks into stars.

For months, MONTHS, all I heard about was how the Knicks were going to trade for AD before signing Kevin Durant and Kyrie Irving and owning the East for the foreseeable future. That was, of course, ONLY if the Knicks missed out on Zion, at which point they’d keep Zion to pair him with KD and Kyrie. Once the lottery happened it was clear that Zion would not be falling to three and that the Pelicans would be more than happy to take #3, Mitch Rob and future picks in exchange for Anthony Davis. There were no worries about the future, the future was today.

Naturally, fucking NONE of that happened. The Knicks took RJ Barrett, signed every middling power forward on the market and dusted their hands as a sign of a job well done. Until this story came out I had completely forgotten that AD’s camp said publicly, multiple times, that he’d happily join the Knicks. A thing no one has said out loud since Melo wanted out of Denver. That alone should have been enough for the Knicks to pounce at that opportunity. Because, as free agency continues to prove, no one wants to play for the fucking Knicks. But, they didn’t pounce. They’re claiming it’s because of the high asking price but that’s not true at all. The Knicks didn’t trade for Anthony Davis because they knew they could not sign anyone else to come play with him. This statement that they offered up an eighth of the way through this season – for seemingly no reason whatsoever – is a complete indictment of their own ineptitude. You could have acquired Anthony Davis. There’s no chance the Pelicans wanted to trade him to the Lakers. They would have happily taken the first and third pick, along with future picks, in order to completely tear it down and start anew in New Orleans around Zion. The Knicks backed out, perhaps scorned from trading first round picks for bad players in the past, and the Lakers instantly stood alone with the best offer on the table.

Anthony Davis + cap space + the East + New York City should theoretically be enough groundwork to rest the foundation of your franchise upon. The Knicks didn’t see it that way. And now, two weeks before Thanksgiving, they’re already discussing firing the coach and starting over again. Which leads me to wonder: is it even considered a rebuild if you never started building anything in the first place?