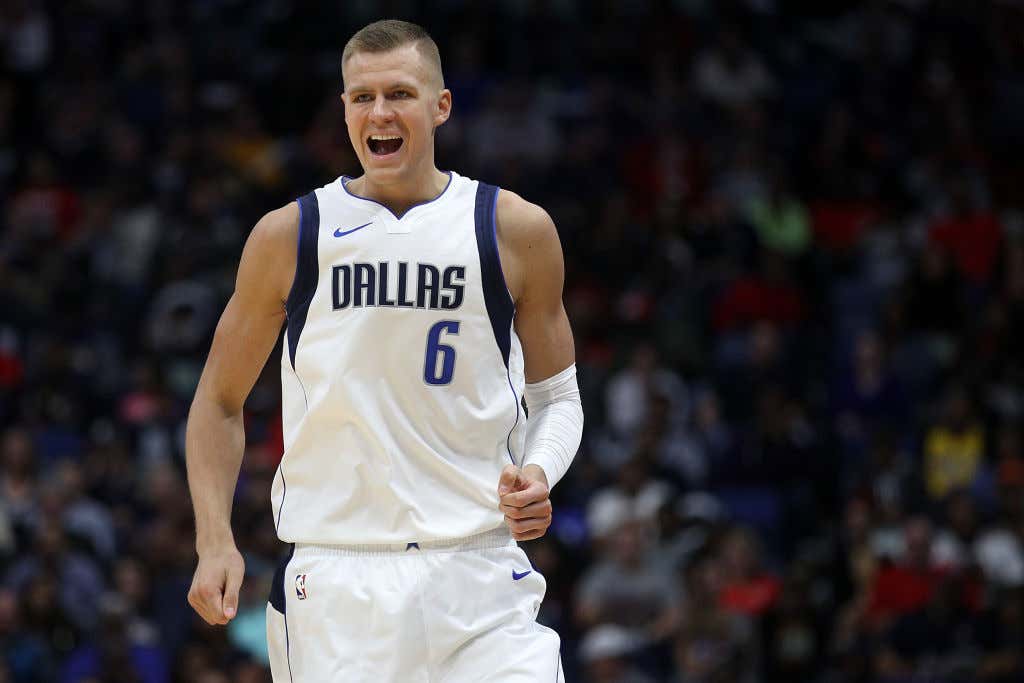 Tonight Luka Doncic leads the Dallas Mavericks into Madison Square Garden. Somewhere behind Luka will be a 7'3" Latvian dude that is going to hear a whole lot of boos, curses, and maybe even hisses. And while that sentence would have made no damn sense 10 years ago, it is still crazy to think about now for a completely different reason.

I've lived through the 90s Knicks, the Starbury honeymoon, the Stat and Melo years, Linsanity, and whatever other brief moments of happiness Knicks fans have experienced over the years and I don't know if one individual player was loved more than Porzingis. Those 90s Knicks had sustainable success. But Patrick Ewing was the star of that team and he never seemed to be properly appreciated by Knicks fans, at least until after the Knicks traded him in a move that set back the franchise a decade. John Starks was a goddamn rollercoaster ride. Oak and Mase were the goons you loved but they didn't have that star appeal. And there were enough likable role players that played hard as well as a well-dressed coach with slicked back hair and championship rings for that love to be spread around.

However, Porzingis was basically the lone bright spot for the Knicks during these dark times that historians will later call The Reign Of Dolan. It obviously started with boos on draft night by idiot Knicks fans and that goddamn annoying Crying Porzingis Kid. But those boos quickly became cheers once we realized he wasn't Frederic Weis 2.0 because he was the one dunking over people, wanted to shoot his shot at Rhianna, and had two (2) Latvian rap songs written about him

Oh yeah and I can't forget the cornrows picture. I was ready to fight for Godzingis in the pits of hell when I saw young Kristaps dripping swag as a youngster.

Everything about Kristaps Porzingis was perfect. He was a video game glitch of a player that was also a living meme, in a good way. He also was bloggers gold and I can't imagine it was a coincidence that Dave hired me 5 months after Porzingis was drafted and had me blogging ridiculous stories, videos, and dunks before shipping my ass to Latvia.

Then obviously the universe autocorrected itself after it realized it mistakenly gave the Knicks the most talented and likable player MSG had seen in forever. I guess the framework was already set because Kristaps was drafted by noted front office savants Phil Jackson and Steve Mills. All the dysfunction of the Dolan Era was on full display on and off the court with things like Kristaps' coach being beat up by Matt Barnes because he was sneaking around with Barnes' estranged wife, Kristaps' starting point guard that called the shitty Knicks a Super Team straight up disappearing for like 24 hours, Joakim Noah disappeared after getting into a shouting match with Kristaps' next coach, Kristaps reportedly being unable to get into a team gym to practice shooting, everything during the brutal last few years of the #StayMe7o Era in New York, the aforementioned beloved Charles Oakley fighting security guards because he hated the owner followed by the aforementioned beloved Charles Oakley being banned from Madison Square Garden for life and roughly a kabillion other things.

The fucked up thing about all this is that I can't even get mad at Porzingis for wanting out of here. All the shit us Knicks fans complain about pales in comparison to the shit the players probably have to go through. Watching a shitty team sucks. But I couldn't imagine having to play for that shitty team and having my future earnings potentially hurt because some silver spoon asshole won't sell his multi-billion dollar franchise and stop being the most hated person in a city filled with millions of people. I wish my fandom could be traded away or I could just retire from being a Knicks fan for all those reasons I just mentioned and more. But I can't because I'm a stupid, loyal idiot that would never have my brother demand a trade for me. You know that video that is floating around of Masai Ujiri?

I can't even blame Masai for saying he hates the Knicks because every true Knicks fan hates the Knicks as well. Masai would fit right in here in that regard (he is also wayyyyy too smart to ever work for James Dolan).

Anyway, the big beef with Porzingis isn't that he left but the way he left. Nobody gave him shit for bailing on an exit meeting with Phil Jackson's outdated ass or being upset with the model franchise for how NOT to run a team. It's that he did it so quietly and quickly and allegedly through his brother after saying how playing for the Knicks was his dream. Do I also irrationally dislike him because he unfollowed me on Twitter instead of muting me like a gentleman? Maybe, maybe not, maybe fuck yourself. But all I know is tonight is going to be very weird seeing our 7'3" unicorn in the opponent's uniform as the MSG faithful brings the fury and hits him with top shelf boos usually reserved for Reggie Miller.

Shout out to the Basketball Gods for not only allowing the Knicks to win their first Mavs game last week but also making Frank Ntlikina look like the guy we've always wanted him to be during it.

I know the Knicks are already in midseason dumpster fire mode and tonight's game is going to be like your ex stopping by your apartment a few months after you broke up only to see you scruffy, clearly unshowered for 3+ days, and empty Chinese food cartons and pizza boxes  as far as the eye can see (which is probably part of the reason Dolan & Co. is freaking out about the team looking like shit days before KP's return).

But at the very worst splitting the first season's series against Porzingis is probably the biggest W the Knicks will lock up this season. (Also shout out to the NBA's schedule makers for getting both of these Knicks vs. Porzingis games in early enough in the season when KP would still be healthy enough to play since seeing him on the court after February seems about as likely as seeing a real unicorn).

Now lets finish this blog with two completely random tweets that I pulled from Twitter after searching "Porzingis". I swear I have no clue what these tweets even say before I copy and paste them.

Despite all those numbers, I'll still be holding my breath every time Porzingis pulls up from 30 feet out or tries to dunk on someone because I'm petty like every other scorned sports fan. Here's to a weird night hopefully not becoming a typical Knicks night where the guy we don't want to drop 40 drops 40 on us and talks about how great it was to perform on the NBA's biggest stage.

Full reaction to tonight's game as well as the last week of typical Knicks tomfoolery will be on tomorrow's weekly Knicks Therapy Session on Reags' podcast Fundamentally Sound (Download/Subscribe/Rate 5 Stars).