"It's official: The Houston Astros are the New England Patriots of Major League Baseball. They cheated! This is no longer hearsay!" - Respected neutral observer Rob Parker

SI - This looks and feels like Spygate, the infamous Patriots’ cheating scandal from 2007. ...

The Astros are a lot like the Patriots: They win a ton, they have unconventional methods, they are secret about those methods. ...

But there are also a few key differences here. One is that the sports are quite different. Football teams are always terrified about somebody watching their practices. Baseball players do a lot of their practicing in full view of the public. To this day, many members of the 2001 St. Louis Rams believe, but cannot prove, that the Patriots filmed their walkthrough before the Super Bowl. It’s hard to even find a comparable possible allegation in baseball, unless somebody says the Astros videotaped the meetings when they go over opposing hitters or something.

The other big difference: The Patriots were widely seen as the lone team breaking this rule, and they were warned about it. ...The Pats kept doing it, and they were perceived as outliers.

The Boston Globe -  As Major League Baseball launches its investigation into the Astros’ sign stealing, the question for the Red Sox remains: What did Alex Cora know?

Cora served as Houston’s bench coach in 2017 — when the Astros won the World Series — before getting tapped by Boston to become Red Sox general manager.

It’s the same season that Houston used a television camera to spot catchers’ signs and relayed the information to hitters by banging on garbage cans.

Well, that settles that. In the words of Rob Parker, "it's official." When you've notable lost voices of reason like Parker, Sportscasting.com, SI and The Boston Globe, you've lost America. When the Houston Astros are being outed by a whistleblower from their own ranks, an insider with first hand knowledge of their cheating and a World Series ring to show for it, the only thing a reasonable people can do is implicate the Patriots.

How can you not? Like SI says, they win a ton. They have unconventional methods they are super secret about. For sure there's a connection there. Except let's not overstate the case because the Astros play in a sport where everybody is stealing signs all the time and no other franchise in the 100 year history of the NFL ever did. The could look at opponent's signs and try to decipher them for a competitive advantage, but that would be wrong. So men of integrity from Curly Lambeau to Al Davis to John Harbaugh have all always averted their eyes and ordered their staff to point their cameras in the other direction, in all instances. Oh, and that Rams walkthrough tape? Just because the Patriots, the NFL, the Boston Herald and John Tomase who wrote the story say it never happened and no being on Earth has ever seen such a tape doesn't mean it doesn't exist. The 2001 Rams believe in it like Kurt Warner believes in Jesus and that's good enough to keep talking about it. Got it? Good. Glad we're straight on that.

So we've got an assistant on the 2007 Patriots pointing a camera at the Jets sideline in Week 1, from an area in the stadium other than the one that is designated as the "Area Where You Can Legally Point a Camera at the Opposing Sideline." And we've got the Astros winning a World Series by banging on trash can lids to tip pitches. So it's only natural - make that a requirement - that we equate the two. All the time.

As a matter of fact, I'm going to go a step further and blame the Patriots. They invented using a camera to cheat. It had never been tried before or since by anyone. And clearly they were the inspiration behind Astros Spygate. What, do you think it's a coincidence that Alex Cora was involved? This Alex Cora? 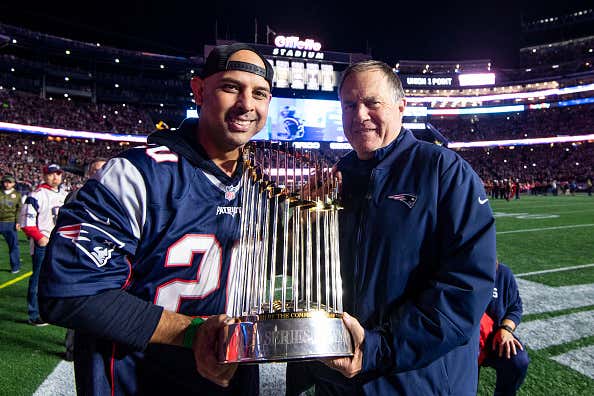 In fact, I'm reporting that as they shared this photo op, Belichick gave Cora pointers on jamming his opponent's bullpen phone with Red Sox radio broadcasts, bugging their manager's office. hacking the scoreboard so it shows the wrong number of outs and warming up the Gatorade in visitors clubhouse.

And let's not kid ourselves it started there. Where do you think the Red Sox got the idea to use Apple Watches to steal signs? You seriously think John Farrell was capable of coming up with that on his own? Fat chance. Like any serial criminal, Belichick has a very distinct modu operandi, and these crimes have his fingerprints all over them.

So this calls for swift and severe punishments for the perpetrators. The Pats didn't learn their lesson from Spygate. Or Deflategate. Or Helmetgate. Or Warm Gatoradegate. And they'll keep ruining other sports unless they get the sword of justice brought down upon their heads for Baseball Spygate. Let's fine them and take draft picks away before the MLB equivalent of Mark Brunell cries.