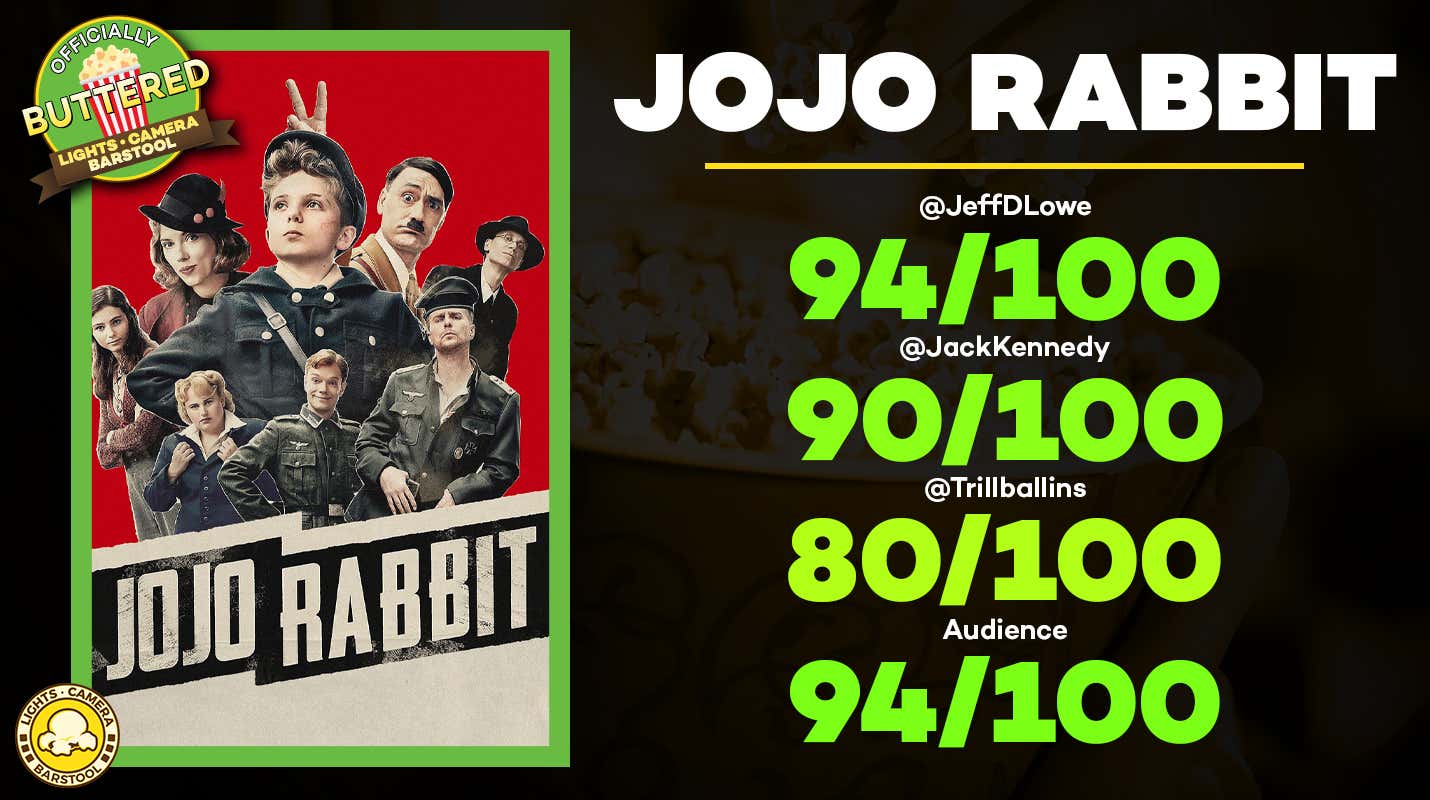 ‘Jojo Rabbit’ has received a lot of praise but has stirred some controversy. Was it a good movie?

Jojo is a lonely German boy who discovers that his single mother is hiding a Jewish girl in their attic. Aided only by his imaginary friend — Adolf Hitler — Jojo must confront his blind nationalism as World War II continues to rage on. (via Google)

JeffDLowe (94/100): ‘Jojo Rabbit’ is a daring, creative movie that has something profound to say, all while remaining a funny and incredibly well-crafted satire. Pulling off a satirical take on Hitler as a kid’s imaginary friend is no small task and I truly believe only someone like Taika Waititi could have pulled it off this successfully.

This movie expertly toes the line on a subject matter that is very tough to navigate. Making Nazis “funny” and “light-hearted” is risky if you can’t execute the vision properly and use it as a device to spell out an engaging message. ‘Jojo Rabbit’ explores the divide of a world, beliefs, religion, ideology and how to break down the wall of hate. It also laughs at hate and Waititi wants you to see the absurdity of what plagued the world during World War II and beyond. It’s bold in its ways, balancing out satire and drama, but it will resonate with you as the message is screamed in a loud and colorful way.

The story and how it plays out isn’t anything insanely new, but the way in which Waititi tells the story in ‘Jojo Rabbit’ is fresh and unique. Inside the movie and the characters come some fantastic performances from the likes of Scarlett Johansson, Taika Waititi and Sam Rockwell. And the jobs done by the two young stars, Roman Griffin Davis and Thomasin McKenzie hold the movie together. Another incredible part of the movie is the music, the German versions of songs from the likes of David Bowie and the Beatles give the movie a special charm and touch. ‘Jojo Rabbit’ is a weaving together of so many emotions and feelings, as well as tones, yet does so beautifully and artistically with very few flaws.

The most bizarre thing to me about the reaction to ‘Jojo Rabbit’ is that some (it still has good marks from critics and high marks from audiences) people think that now is not the right time for this movie to be released. I don’t want to get all political here, but isn’t the best time to have a movie comment on hate be a time in the world in which there is so much hate? It’s understandable that some might take offense to the light-hearted use of the characters and settings, I do get that. However, I think those who liked the movie but gave it negative reviews based on its relevance to our current culture might change their mind on the movie as time passes. There’s a fantastic message in ‘Jojo Rabbit’ that is put together in a carefully constructed way. With time, I think the negativity surrounding this movie’s subject matter will soften.

‘Jojo Rabbit’ is an important movie for many reasons, from what it says about the current state of the world, down to sticking out in a Hollywood littered with sequels, reboots and major tentpole franchises. It might not exactly work for everyone, but if you can connect with ‘Jojo Rabbit’ you will have one of the best theater experiences of the year.

KenJac (90/100): In a cinematic moment where everyone is seemingly complaining about the lack of original movies, ‘Jojo Rabbit’ is a breath of fresh air. It’s thoughtful and genuine while remaining dedicated to delivering the hilarious moments we’ve come to expect from director/star Taika Waititi. There anti-hate message that was teased to be in the movie is subtle and loud at the same time, but it never takes away from the movie’s cohesion which is the important thing.

I can’t really emphasize how great the cast was. I’m always a little hesitant going into a movie with a child lead because acting is simply a hard thing to do. Roman Griffin Davis, however, did a great job in a complicated lead role. Thomasin McKenzie, who I’ve been saying will be a star since her powerhouse performance in ‘Leave No Trace’, was incredible as well. The two of them do a great job building a relationship throughout the movie which helps deliver the anti-hate message without it taking over the movie. Also, shoutout to Archie Yates who played Jojo’s best friend Yorki. This kid had me belly laughing with every line he delivered. The adult cast was great in their smaller capacity. I think this is actually my favorite Scarlett Johansson role ever, and this satirical black-comedy space is perfectly built for her. Waititi’s rendition of imaginary friend Hitler was laugh out loud funny, as was Sam Rockwell and Rebel Wilson’s Hitler Youth instructors.

I really liked the pace of this movie and the way Waititi weaved in comedic and dramatic elements. If you go into this expecting ‘The Death of Stalin’, a similar historical-based black comedy satire, you may be a little disappointed. There is a dramatic tone to this movie which I’ve seen a lot of critics bitching about, saying it detracts from the main thematic feel. To them, I say this: Shut… da fuk up. I don’t think Waititi built this film to have it fit into a particular genre or anything. The movie is its own thing and I think it works great. We are currently in a comedic dead zone for movies, and this movie delivered the most laughs for me out of any film this year. From a satirical standpoint, it makes fun of Nazis, obviously, but without doing so in a way that feels lazy. Dramatically, there are some jaw-dropping moments that really pull at your heartstrings (one, in particular, had me tearing up big time).

Cinematically, it looks fantastic. The production value really helps you immerse yourself into the time period and it’s a further example to me on how Taika is simply a master of colors. When things are going good for Jojo, everything is bright and childlike with the Nazi shades of red and beige emphasized. When things are going bad, everything becomes dim, with the saturation turned down to a zero. It helps you feel more like a kid again which puts you into Jojo’s shoes in a much easier way. Also, Waitit’s music selection for the film is top-notch. Maybe one of my favorites of the year and Michael Giacchino’s OST was phenomenal as well.

It might not be exactly what you’re expecting going into it, but it’s fantastic nonetheless. You’ll laugh, you’ll cry, and you’ll walk away not really knowing how to feel. Taika Waititi remains a shooting star and is maybe one of the best comedy writers in the business right now.

—
The movie is Officially Buttered with all four combined scores well over the 69/100 threshold. We did an in-depth review of the movie on Lights Camera Barstool for our mid-week episode. Make sure to rate all 2019 and 2018 movies in the links below.