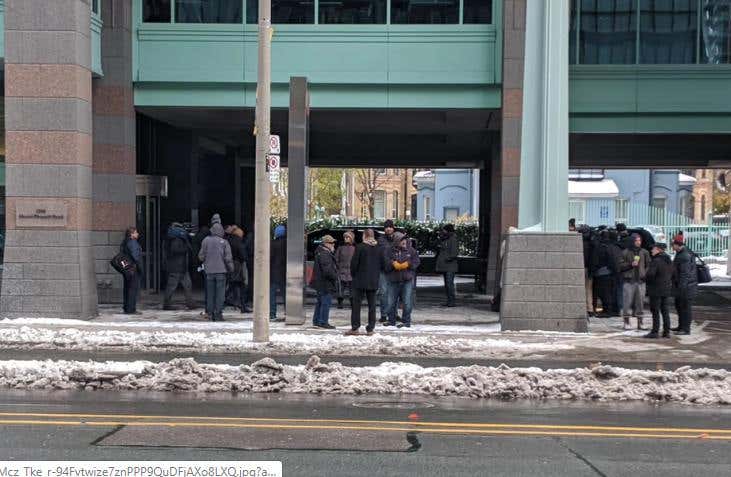 And there you have it. The photo thanks to hockey/r

I gave it a quick count and if I had to guess I’d say there are roughly 15 people out there protesting. About enough for a men’s league team. 15 people in Canada is fringing upon a revolution of unrest, but that basically sums up this whole thing. Cherry’s people aren’t the protesting type. Don Cherry, a legend in Canada and the hockey community is out and not that many people truly care. Count me in the minority of “hockey twitter”, but I really liked Don Cherry. The same way you love a Grandparent. Pearls of wisdom and humor mixed in with utter nonsense and a splice of out dated and offensive thoughts.. That was what you got. Entertainment, but cringe-worthy moments. I am sad that it was finally time for him to go, but I think it was time. I wish they could’ve worked with him in the summer to have a sort of fairwell tour so this type of thing didn’t happen. Anyone who has watched Grapes over the years knows that he’d never allow that to happen. He’d never let people show him the door. Because the powers that be absolutely wanted it to happen and have for a long time. The execs were waiting for Cherry to give them a chance and he handed it to them on a bed of poppies. It’s shame. It was necessary, but it’s a shame nonetheless because he did add to the greater hockey landscape. I wish he could’ve better adapted to the “hockey is for everyone” cultural and stuck to just hating people that it’s acceptable to hate like Russians, Matt Cooke, the Sedins, the Canadiens, and yankee doodle dandies